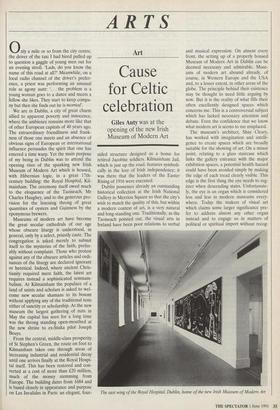 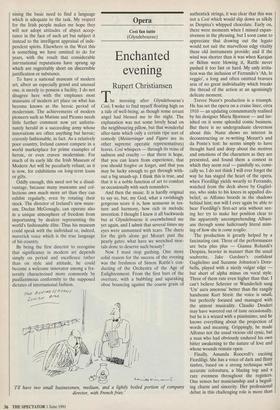 Cause for Celtic celebration

Only a mile or so from the city centre, the driver of the taxi I had hired pulled up to question a gaggle of young men out for an evening stroll. 'Lads, do you know the name of this road at all?' Meanwhile, on a local radio channel of the driver's prefer- ence, a priest was performing an unusual role as agony aunt: `. .. the problem is a young woman goes to a dance and meets a fellow she likes. They start to keep compa- ny but then she finds out he is morried'.

We are in Dublin, a city of great charm allied to apparent poverty and innocence, where the ambience remains more like that of other European capitals of 40 years ago. The extraordinary friendliness and frank- ness of those one meets and an absence of obvious signs of European or international influence persuades the spirit that one has entered a time warp. Yet the main purpose of my being in Dublin was to attend the opening rites of the spanking new Irish Museum of Modern Art which is housed, with Hibernian logic, in a great 17th- century building: the Royal Hospital, Kil- mainham. The ceremony itself owed much to the eloquence of the Taoiseach, Mr Charles Haughey, and to the generous pro- vision for the listening throng of great quantities of oysters and Guinness by the eponymous brewers.

Museums of modern art have become the great secular cathedrals of our age whose obscure liturgy is understood, in general, only by a select, priestly caste. The congregation is asked merely to submit itself to the mysteries of the faith, prefer- ably without complaint. Those who protest against any of the obscure articles and ordi- nances of the liturgy are declared ignorant or heretical. Indeed, where ancient Chris- tianity required mere faith, the latest art requires instead a sophisticated somnam- bulism. At Kilmainham the populace of a land of saints and scholars is asked to wel- come new secular shamans to its bosom without applying any of the traditional tests either of sanctity or scholarship. At the new museum the largest gathering of nuts in May the capital has seen for a long time was the throng standing open-mouthed at the new shrine to ex-Stuka pilot Joseph Beuys.

From the central, middle-class prosperity of St Stephen's Green, the route on foot to Kilmainham takes one through areas of increasing industrial and residential decay until one arrives finally at the Royal Hospi- tal itself. This has been restored and con- verted at a cost of more than L20 million, much of the money stemming from Europe. The building dates from 1684 and is based closely in appearance and purpose on Les Invalides in Paris: an elegant, four- sided structure designed as a home for retired Jacobite soldiers. Kilmainham Jail, which is just up the road, features symboli- cally in the lore of Irish independence; it was there that the leaders of the Easter Rising of 1916 were executed.

Dublin possesses already an outstanding historical collection at the Irish National Gallery in Merrion Square so that the city's wish to match the quality of this, but within a modern context of art, is a very natural and long-standing one. Traditionally, as the Taoiseach pointed out, the visual arts in Ireland have been poor relations to verbal and musical expression. On almost every front, the setting up of a properly housed Museum of Modern Art in Dublin can be deemed necessary and admirable. Muse- ums of modern art abound already, of course, in Western Europe and the USA and, to a lesser extent, in other areas of the globe. The principle behind their existence may be thought to need little arguing by now. But it is the reality of what fills their often excellently designed spaces which concerns me. This is a controversial subject which has lacked necessary attention and debate. Even the confidence that we know what modern art is seems to me misplaced.

The museum's architect, Shay Cleary, has worked with imagination and intelli- gence to create spaces which are broadly suitable for the showing of art. On a minor point, relating to a glass staircase which links the gallery entrance with the major exhibition spaces, a potential health hazard could have been avoided simply by making the edge of each tread clearly visible. This edge is the first thing the eye needs to reg- ister when descending stairs. Unfortunate- ly, the eye is an organ which is considered less and less in modern museums every- where. Today the makers of visual art which claims some larger significance pre- fer to address almost any other organ instead and to engage us in matters of political or spiritual import without recog- The east wing of the Royal Hospital, Dublin, home of the new Irish Museum of Modern Art nising the basic need to find a language which is adequate to the task. My respect for the Irish people makes me hope they will not adopt attitudes of abject accep- tance in the face of such art but subject it instead to the intelligent appraisal of inde- pendent spirits. Elsewhere in the West this is something we have omitted to do for years, with the result that considerable international reputations have sprung up which are regrettably short on discernible justification or substance.

To have a national museum of modern art, albeit an especially grand and unusual one, is merely to possess a facility. I do not disagree here with the emphases most museums of modern art place on what has become known as the heroic period of modernism. The achievements of modern pioneers such as Matisse and Picasso needs little further comment now yet unfortu- nately herald in a succeeding army whose innovations are often anything but heroic; cravenly fashionable, in fact. As a relatively poor country, Ireland cannot compete in a world marketplace for prime examples of heroic, or even craven modernism. For much of its early life the Irish Museum of Modern Art will be peculiarly reliant, as it is now, for exhibitions on long-term loans or gifts.

Oddly enough, this need not be a disad- vantage, because many museums and col- lections own much more art than they can exhibit regularly, even by rotating their stock. The director of Ireland's new muse- um, Declan McGonagle, can operate also in a unique atmosphere of freedom from importuning by dealers representing the world's fashionable elite. Thus his museum could speak with the individual or, indeed, maverick voice which is the true language of his country.

By being the first director to recognise that significance in modern art depends simply on period and excellence rather than on style and attitude, he could become a welcome innovator among a fra- ternity characterised more commonly by pusillanimous conformity to the supposed dictates of international fashion.