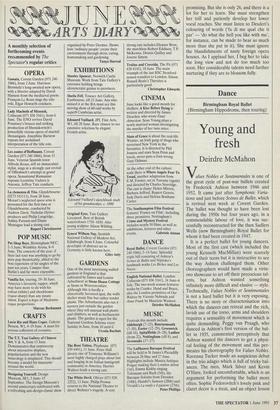 Page 37, 1 June 1991 — A monthly selection of forthcoming events recommended by The Spectator's
Close

Pet Shop Boys, Birmingham NEC, 2-3 June; Wembley Arena, 8-9 June. The concerts of the year, if their last tour was anything to go by: pure pop theatricality, allied to the best repertoire of hit singles of the past ten years. Camper than Butlin's and far more enjoyable.

Vanilla Ice, touring, 19-30 June. America's favourite rapper, which may have more to do with his colour (white) and cheekbones (razor-sharp) than any innate talent. Expect a hype of Madonna- esque proportions.

Lucie Rie and Hans Coper, Galerie Besson, WI, 4-19 June. A must for serious collectors of ceramics.

The T.T. Tsui Gallery of Chinese Art, V & A, from 13 June. Demonstrates that controversy about interactive displays, Popularisation and the new museology is misplaced. This should become a model for museums around the world.

Sheila Fell, Towner Art Gallery, Eastbourne, till 23 June. Any who missed it at the RA must see this moving show of 60-odd works by superb Cumbrian artist.

One of the most interesting walled gardens in England is that cultivated by James and Louisa Arbuthnott at Stone House Cottage at Stone in Worcestershire. Although this is hardly a climatically favoured spot, the walls shelter many fine but rather tender plants. The Arbuthnotts also run a nursery just outside the garden where they sell unusual wall plants and climbers, as well as herbaceous plants. The garden is open for the National Gardens Scheme every Sunday in June, from 10 until 6.

The Rose Tattoo, Playhouse (071 839 4401), 11 June. Peter Hall directs one of Tennesee Williams's most highly charged plays about lust and longing in an Italian immigrant community in America. Harriet Walters leads a strong cast.

June looks like a good month for thrillers. A Kiss Before Dying is written and directed by James Dearden, who wrote Fatal Attraction. Sean Young plays a newly married woman investigating the murder of her twin sister.

State of Grace is about the real-life Westies, an Irish gang of thugs who terrorised New York in the Seventies. It is directed by Phil Joanou and stars Sean Penn and lovely, never-puts-a-foot-wrong Gary Oldman.

At the other end of the culture scale there is Where Angels Fear To Tread, another adaptation from E.M. Forster, set in Tuscany (again) and directed by Charles Sturridge. The cast is classy: Helen Mirren, Barbara Jefford, Rupert Graves, Judy Davis and Helena Bonham- Carter.