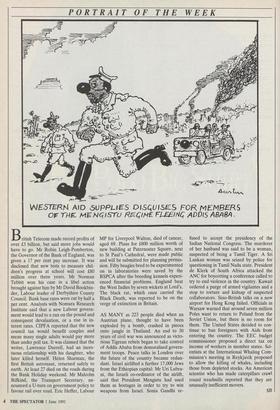 British Telecom made record profits of over £3 billion, but said more jobs would have to go. Mr Robin Leigh-Pemberton, the Governor of the Bank of England, was given a 17 per cent pay increase. It was disclosed that new tests to measure chil- dren's progress at school will cost £80 million over three years. Mr Norman Tebbit won his case in a libel action brought against him by Mr David Bookbin- der, Labour leader of Derbyshire County Council. Bank base rates were cut by half a per cent. Analysts with Nomura Research Institute said that a new Labour govern- ment would lead to a run on the pound and consequent devaluation, or a rise in in- terest rates. CIPFA reported that the new council tax would benefit couples and mean many single adults would pay more than under poll tax. It was claimed that the writer, Lawrence Durrell, had an inces- tuous relationship with his daughter, who later killed herself. Helen Sharman, the first British astronaut, returned safely to earth. At least 27 died on the roads during the Bank Holiday weekend. Mr Malcolm Riflcind, the Transport Secretary, an- nounced a U-turn on government policy to favour rail over road. Eric Heifer, Labour MP for Liverpool Walton, died of cancer, aged 69. Plans for £800 million worth of new building at Paternoster Square, next to St Paul's Cathedral, were made public and will be submitted for planning permis- sion. Fifty beagles bred to be experimented on in laboratories were saved by the RSPCA after the breeding kennels experi- enced financial problems. England beat the West Indies by seven wickets at Lord's. The black rat, which once carried the Black Death, was reported to be on the verge of extinction in Britain.

AS MANY as 223 people died when an Austrian plane, thought to have been exploded by a bomb, crashed in pieces onto jungle in Thailand. An end to 30 years of civil war was announced as victo- rious Tigrean rebels began to take control of Addis Ababa from demoralised govern- ment troops. Peace talks in London over the future of the country became redun- dant. Israel airlifted a further 17,000 Jews from the Ethiopian capital: Mr Uri Lubra- ni, the Israeli co-ordinator of the airlift, said that President Mengistu had used them as hostages in order to try to win weapons from Israel. Sonia Gandhi re- fused to accept the presidency of the Indian National Congress. The murderer of her husband was said to be a woman, suspected of being a Tamil Tiger. A Sri Lankan woman was seized by police for questioning in Tamil Nadu state. President de Klerk of South Africa attacked the ANC for boycotting a conference called to try to end violence in the country. Kuwait ordered a purge of armed vigilantes and a stop to torture and kidnap of suspected collaborators. Sino-British talks on a new airport for Hong Kong failed. Officials in Warsaw warned that around seven million Poles want to return to Poland from the Soviet Union, but there is no room for them. The United States decided to con- tinue to ban foreigners with Aids from entering the country. The EEC budget commissioner proposed a direct tax on income of workers in member states. Sci- entists at the International Whaling Com- mission's meeting in Reykjavik proposed to allow the killing of whales, including those from depleted stocks. An American scientist who has made caterpillars crawl round treadmills reported that they are unusually inefficient movers.