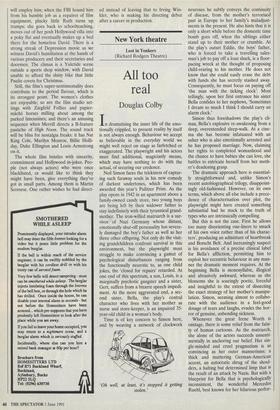 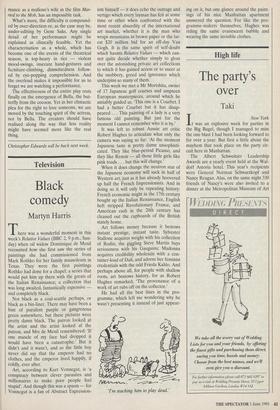 In dramatising the inner life of the emo- tionally crippled, to present reality by itself is not always enough. Behaviour we accept as believable in the everyday world we might well reject on stage as farfetched or exaggerated. The playwright and his actors must find additional, magicianly means, which may have nothing to do with the actual, of securing our credence.

Neil Simon faces the trickiness of captur- ing such faraway souls in his new comedy of darkest undertones, which has been awarded this year's Pulitzer Prize. As the play opens in 1942 in an apartment above a family-owned candy store, two young boys are being left by their widower father to stay indefinitely with their tyrannical grand- mother. The iron-willed matriarch is a sur- vivor of Nazi Germany whose distant, emotionally shut-off personality has severe- ly damaged the boy's father as well as her three other offspring. Not only do the visit- ing grandchildren confront survival in this environment, but the playwright must struggle to make convincing a gamut of psychological disturbances ranging from the functionally neurotic to, as one child jokes, the 'closed for repairs' retarded. At one end of this spectrum, a son, Louis, is a marginally psychotic gangster and a sister, Gert, suffers from a bizarre speech impedi- ment. At the more aggravated end, a sec- ond sister, Bella, the play's central character who lives with her mother as nurse and store-keeper, is an impaired 35- year-old child in a woman's body.

Time is of key concern to Simon here, and by weaving a network of clockwork `Oh well, at least, it's stopped it getting stolen.' neuroses he subtly conveys the continuity of disease, from the mother's terrorised past in Europe to her family's maladjust- ments in the present. He also hints that it is only a short while before the domestic time bomb goes off, when the siblings either stand up to their mother or crumble. At the play's outset Eddie, the boys' father, who is forced to take a travelling sales- man's job to pay off a loan shark, is a floor- pacing wreck at the thought of proposing child-rearing to his mother. He does not know that she could easily erase the debt with funds she has secretly stashed away. Consequently, he must focus on paying off `the man with the ticking clock'. Most tellingly, upon her first entrance his sister Bella confides to her nephews, 'Sometimes I dream so much I think I should carry an alarm clock.'

Simon thus foreshadows the play's cli- max, Bella's explosive re-awakening from a deep, overextended sleep-walk. At a cine- ma she has become infatuated with an usher who is also emotionally arrested and he has proposed marriage. Now, claiming her rights to completed womanhood and the chance to have babies she can love, she battles to extricate herself from her moth- er's deadening grasp.

The dramatic approach here is essential- ly straightforward and, unlike Simon's recent autobiographical trilogy, disappoint- ingly old-fashioned. However, on its own terms, which above all else include a prece- dence of characterisation over plot, the playwright might have created something substantial had he stuck to the truth of types who are intrinsically compelling.

But this is not the case. First he allows too many disorienting one-liners to smack of his own voice rather than of his charac- ters', producing an admixture of heartbreak and Borscht Belt. And increasingly suspect is his avoidance of a precise clinical label for Bella's affliction, permitting him to exploit her eccentric behaviour in any man- ner the dramatic moment requires. At the beginning Bella is monosyllabic, illogical and abrasively awkward, whereas as she blossoms she is soaringly poetic, forceful and insightful to the extent of dissecting the exact strategy of her mother's manipu- lation. Simon, seeming almost to collabo- rate with the audience in a feel-good dosage of tears and laughs, evades the hor- ror of genuine, unbending sickness.

Whenever the great Irene Worth is onstage, there is some relief from the falsi- ty of human cartoons. As the matriarch, she alone of the actors succeeds unsenti- mentally in anchoring our belief. Her sin- gle-minded and cruel pragmatism is as convincing as her outer mannerisms: a thick and muttering German-American accent, an autocratic shrug of the shoul- ders, a halting but determined limp that is the result of an attack by Nazis. But with a blueprint for Bella that is psychologically inconsistent, the wonderful Mercedes Ruehl, best known for her hilarious perfor-

mance as a mafioso's wife in the film Mar- ried to the Mob, has an impossible task.

What's more, the difficulty is compound- ed by over-direction or, as the case may be, under-editing by Gene Saks. Any single detail of her performance might be explained as clinically feasible. Yet the characterisation as a whole, which has become one of the events of the theatrical season, is top-heavy in tics — violent mood-swings, insecure hand-gestures and furniture-climbing, dimwittedness follow- ed by eye-popping comprehension. And the overload makes it impossible for us to forget we are watching a performance.

The effectiveness of the entire play rests finally on the emergence of Bella, the but- terfly from the cocoon. Yet in her climactic plea for the right to love someone, we are moved by the touching spirit of the actress, not by Bella. The creators should have realised along the way that less reality might have seemed more like the real thing.