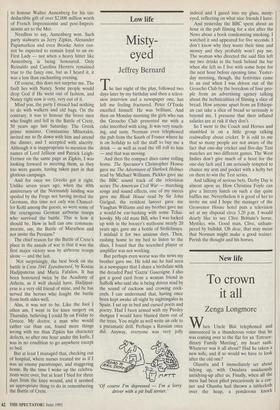 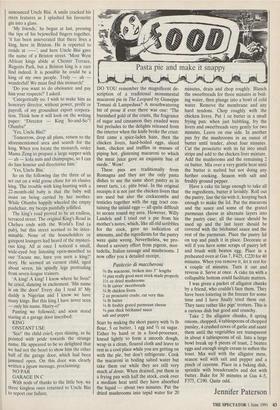 To crown it all

When Uncle Bisi telephoned and announced in a thunderous voice that he was coming over to the flat for an 'Extraor- dinary Family Meeting', my heart sank. Whatever was it all about? Had he taken a new wife, and if so would we have to look after the old one?

Olumba and I immediately set about tidying up, with Omalara assiduously untidying-up after us. Finally, when all the mess had been piled precariously in a cor- ner and Olumba had thrown a tablecloth over the heap, a ponderous knock announced Uncle Bisi. A smile cracked his stern features as I splashed his favourite gin into a glass.

`My friends,' he began at last, pressing the tips of his bejewelled fingers together, `it has been asseverated that there lives a king, here in Brixton. He is reported to reside at —', and here Uncle Bisi gave the name of a Brixton street. 'Most West African kings abide at Chester Terrace, Regents Park, but a Brixton king is a rare find indeed. It is possible he could be a king of my own people. Truly — ah wonderful! We must find this monarch!'

`Do you want to do obeisance and pay him your respects?' I asked.

`Categorically no. I wish to make him an honorary director, without power, profit or payroll, of my groundnut export corpora- tion. Think how it will look on the writing paper: "Director — King So-and-So"! Olumba!'

`Tomorrow, drop all plans, return to the aforementioned area and search for the king. When you locate the monarch, order Mama Zeng to prepare a large supper with — ah — kola nuts and champagne, so I can do him honour and directorise him.'

So on the following day the three of us set out on a wild goose chase for an elusive king. The trouble with king-hunting with a 22-month-old baby is that the baby will insist on being carried by her mother. While Olumba happily wheeled the empty pushchair, my biceps painfully jellified.

The king's road proved to be an endless, terraced street. The original King's Road in Chelsea ends with the World's End (a pub), but this street seemed to be inter- minable. None of the householders or gatepost loungers had heard of the mysteri- ous king. All at once I noticed a small, wide-eyed boy listening open-mouthed to our 'Excuse me, have you seen a king?' story. He seemed an earnest child, aged about seven, his spindly legs protruding from seven-league trainers.

`A king! A king! I know where he lives!' he cried, dancing in excitement. 'His name is on the door! Every day I read it! My daddy is Nigerian and I know we have many kings. But this king I have never seen — only his name. Hurry-o!'

Panting we followed, and soon stood staring at a garage door inscribed: KING ONSTANT USE `See!' the child cried, eyes shining, as he pointed with pride towards the strange name. He appeared to be so delighted that we had not the heart to show him the other half of the garage door, which had been jammed open. On this door was clearly written a jigsaw message, proclaiming: NO PAR GARAGE IN C With nods of thanks to the little boy, we three kingless ones returned to Uncle Bisi to report our failure.