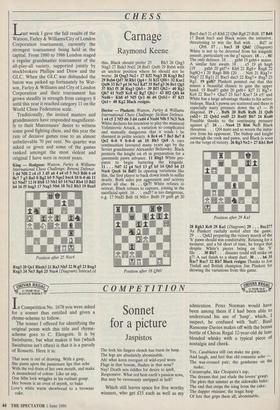 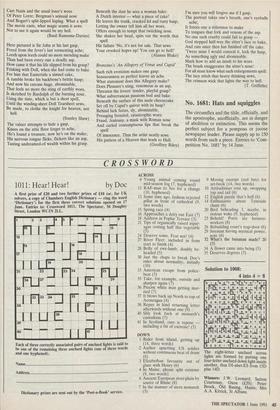 Sonnet for a picture

In Competition No. 1678 you were asked for a sonnet thus entitled and given a rhyme-scheme to follow.

The tenner I offered for identifying the original poem with this title and rhyme- scheme goes to C. Elengorn. It is by Swinburne, but what makes it fun (which Swinburne isn't often) is that it is a parody of Rossetti. Here it is:

That nose is out of drawing. With a gasp, She pants upon the passionate lips that ache With the red drain of her own mouth, and make A monochord of colour. Like an asp, One lithe lock wriggles in his rutilant grasp. Her bosom is an oven of myrrh, to bake Love's white warm shewbread to a browner cake. The lock his fingers clench has burst its hasp. The legs are absolutely abominable. Ah! what keen overgust of wild-eyed woes Flags in that bosom, flushes in that nose? Nay! Death sets riddles for desire to spell, Responsive. What red hem earth's passion sews, But may be ravenously unripped in hell?

Which still leaves space for five worthy winners, who get f15 each as well as my

admiration. Peter Norman would have been among them if I had been able to understand his use of 'hasp', which, I suspect, he confused with 'haft'. Basil Ransome-Davies makes off with the bonus bottle of Chivas Regal 12-year-old de luxe blended whisky with a typical piece of nostalgia and cheek.

Yes, Casablanca still can make me gasp, And laugh, and feel that old romantic ache The war-crossed pair; the gendarme on the make; Catastrophe, like Cleopatra's asp; The dreams that just elude the lovers' grasp; The plots that simmer as the sidewalks bake; The end that strips the icing from the cake; The dapper resistant; the tragic hasp Of fate that grips them all; abominable, Curt Nazis and the usual loser's woes Of Peter Lorre; Bergman's sensual nose And Bogart's split-lipped lisping. What a spell The movie casts, what magic seams it sews. Not to see it again would be my hell.

(Basil Ransome-Davies) Here pictured is Sir John at his last gasp, Freed from the fever's last tormenting ache; Leech upon leech could no more mending make Than had been every one a deadly asp. How came it that his life slipped from his grasp? Frisking with Doll, when she had come to bake For him that Eastertide a simnel cake, A tumble broke his backbone's brittle hasp; And now his carcase huge, abominable, That feels no more the sting of earthly woes, Is sketched by Bardolph of the burning nose, Using the time, which is but a short spell, Until the winding-sheet Doll Tearsheet sews, Be made, to clothe the knight for heaven, not hell. (Stanley Shaw) The valuer attempts to hide a gasp, Knees on the attic floor forget to ache, He's found a treasure, now he's on the make; His nervous tongue flicks, flickers like an asp, Tasting undreamed-of wealth within his grasp. Beneath the dust he sees a woman bake: A Dutch interior — what a piece of cake! He leaves the trunk, cracked lid and rusty hasp, Letting the owner tell him all her woes, Offers enough to tempt that twitching nose. She shakes her head, spits out the words that spell His failure 'No, it's not for sale. That sews Your crooked hopes up! You can go to hell!'

(Alanna Blake) Bronzino's 'An Allegory of Venus and Cupid' Such rich eroticism makes one gasp: Sensuousness so perfect leaves an ache. What statement does this Allegory make? Does Pleasure's sting, venomous as an asp, Threaten the lovers' tender, playful grasp? What subterranean passions boil and bake Beneath the surface of this nude cheesecake Set off by Cupid's quiver with its hasp? Behind lurk furies, sly, abominable, Presaging frenzied, catastrophic woes: Fraud, Jealousy, a mask with Roman nose And curled contemptuous lips that break the spell Of innocence. Thus the artist neatly sews His pattern of a Heaven that le(aGdesotfforeHyeRill. Riley) I'm sure you will forgive me if I gasp, The portrait takes one's breath, one's eyeballs ache; It forces one a reference to make To tongues that fork and venom of the asp. No one such cruelty could fail to grasp God stopped half-way the sitter's face to bake, And rain since then has finished off the cake. 'Twere mine I would conceal it, lock the hasp, As something ugly and abominable.

Mark how to add an insult to his woes The brush exaggerates the sitter's nose! For all must know what such enlargements spell: The lacy stitch that heavy drinking sews, The crimson wick that lights the way to hell.