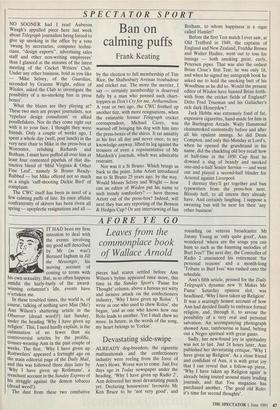 NO SOONER had I read Auberon Waugh's appalled piece here last week about Telegraph journalists being forced to give up smoking in the office by a vote `swung by secretaries, computer techni- cians, "design exports", advertising sales staff and other non-writing employees' than I glanced at the minutes of the latest meeting of the Cricket Writers' Club. Under any other business, bold as you like — 'Mike Selvey, of the Guardian, seconded by Graeme Wright, editor of Wisden, asked the Club to investigate the possibility of a no-smoking ban in press boxes'.

What the blazes are they playing at? These two men are proper journalists, not 'typeface design consultants' or allied poodlefakers. Nor do they come right out with it to your face. I thought they were friends. Only a couple of weeks ago, I spent a whole day (well, post lunch) in the very next chair to Mike in the press-box at Worcester, relishing Richards and Botham. I must have puffed all over him at least four contented pipefuls of that dis- tinctive blend of 'Mild Virginia & Other Fine Leaf , namely St Bruno Ready- Rubbed — but Mike offered not so much as a single 'cuff-shooting Dickie Bird' of complaint.

The CWC itself has been in need of a few calming puffs of late. Its once affable confraternity of skivers has been riven all spring — apoplectic resignations and all by the election to full membership of Tim Rice, the Shaftesbury Avenue troubadour and cricket nut. The more the merrier, I say — certainly membership is deserved fully by a man who penned such chart- toppers as Don't Cry for me, Arthurmilton. A year or two ago, the CWC frothed up another tizz, with more resignations, when the estimable former Telegraph cricket correspondent, Michael Carey, was warned off bringing his dog with him into the press-boxes of the shires. It sat amiably at his feet all day and never once, to my knowledge anyway, lifted its leg against the trousers of even a representative of Mr Murdoch's journals, which was admirable restraint.

Nor was it a St Bruno. Which brings us back to the point. John Arlott introduced me to St Bruno 25 years ago, by the way. Would Messrs Selvey and Wright — how can an editor of Wisden put his name to such trendy tomfoolery? — have thrown Arlott out of the press-box? Indeed, will next they ban any reporting of the Benson & Hedges Cup? Or any interviewing of Ian Botham, to whom happiness is a cigar called Hamlet?

Before the first Test match I ever saw, at Old Trafford in 1949, the captains of England and New Zealand, Freddie Brown and Walter Hadlee, went out to toss for innings — both smoking great, curly, Petersen pipes. That was also the onliest Brian Close's first Test; he was only 18, and when he signed my autograph book he asked me to hold the smoking butt of his Woodbine as he did so. Would the present editor of Wisden have banned Brian forth- with from the cricket fields of England? Ditto Fred Trueman and his Gallacher's rich dark Honeydew?

Jack Hobbs was extremely fond of fat, expensive cigarettes, hand-made for him in the Burlington Arcade. Wally Hammond chainsmoked contentedly before and after all his opulent innings. So did Denis Compton, and only this Monday at Lord's, when he opened the grandstand in his name, did the chuckling old boy recall how at half-time in the 1950 Cup final he downed a slug of brandy and smoked one-and-a-half Senior Service — and went out and played a second-half blinder for Arsenal against Liverpool.

I daresay they'll get together and ban typewriters from the press-box next. Bloody hell, to all intents they already have. And certainly laughing. I suppose a swearing ban will be next for their 'any other business'.