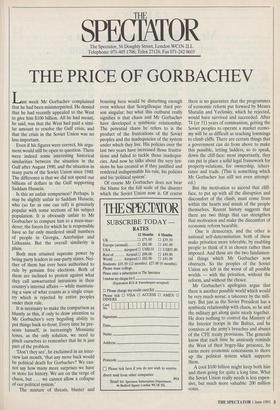 THE PRICE OF GORBACHEV

Last week Mr Gorbachev complained that he had been misinterpreted. He denied that he had recently appealed to the West to give him $100 billion. All he had meant, he said, was that the West had paid a simi- lar amount to resolve the Gulf crisis, and that the crisis in the Soviet Union was no less important.

Even if his figures were correct, his argu- ment would still be open to question. There were indeed some interesting historical similarities between the situation in the Gulf after August 1990, and the situation in many parts of the Soviet Union since 1940. The difference is that we did not spend our billions of dollars in the Gulf supporting Saddam Hussein.

Is this an unfair comparison? Perhaps. It may be slightly unfair to Saddam Hussein, who (so far as one can tell) is genuinely popular with some sections of his subject population. It is obviously unfair to Mr Gorbachev to compare him to a mass-mur- derer; the forces for which he is responsible have so far only murdered small numbers of people in Georgia, Azerbaijan and Lithuania. But the overall similarity is plain.

Both men attained supreme power by being party leaders in one-party states. Nei- ther of them has ever been authorised to rule by genuine free elections. Both of them are inclined to protest against what they call unwarranted intrusions in their country's internal affairs — while maintain- ing a view of what counts as a single coun- try which is rejected by entire peoples under their rule.

It is necessary to make the comparison as bluntly as this, if only to draw attention to Mr Gorbachev's very beguiling ability to put things back-to-front. Every time he pre- sents himself, in increasingly Messianic tones, as the only solution, we need to pinch ourselves to remember that he is just part of the problem.

`Don't they see', he exclaimed in an inter- view last month, 'that any move back would be political death for Gorbachev? We can- not say how many more surprises we have in store for history. We are on the verge of chaos, but . . . we cannot allow a collapse of our political system.'

The mixture of threats, bluster and boasting here would be disturbing enough even without that Scargillesque third per- son singular; but what this outburst really signifies is that chaos and Mr Gorbachev have developed a symbiotic relationship. The potential chaos he refers to is the product of the frustrations of the Soviet peoples and the inadequacies of the system under which they live. His policies over the last two years have increased those frustra- tions and failed to tackle those inadequa- cies. And now he talks about the very ten- sions he has created as if they justified and rendered indispensable his rule, his policies and his 'political system'.

Of course Mr Gorbachev does not bear the blame for the full scale of the disaster which the Soviet Union now is. Of course there is no guarantee that the programmes of economic reform put forward by Messrs Shatalin and Yavlinsky, which he rejected, would have survived and succeeded. After 74 (or 51) years of communism, getting the Soviet peoples to operate a market econo- my will be as difficult as teaching lemmings to climb cliffs. There are certain things that a government can do from above to make this possible, letting ladders, so to speak, down the cliff-face: most importantly, they can put in place a solid legal framework for property-relations, for ownership, inheri- tance and trade. (This is something which Mr Gorbachev has still not even attempt- ed.) But the motivation to ascend that cliff- face, to put up with all the disruption and discomfort of the climb, must come from within the hearts and minds of the people themselves. Recent history suggests that there are two things that can strengthen that motivation and make the discomfort of economic reform bearable.

One is democracy, and the other is national self-determination: both of these make privation more tolerable, by enabling people to think of it as chosen rather than imposed. And these are the two fundamen- tal things which Mr Gorbachev now obstructs. So the peoples of the Soviet Union are left in the worst of all possible worlds — with the privation, without the reform, and without the choice.

Mr Gorbachev's apologists argue that there is another possible world which would be very much worse: a takeover by the mili- tary. But just as the Soviet President has a symbiotic relationship with chaos, so he and the military get along quite nicely together. He does nothing to control the Ministry of the Interior troops in the Baltics, and he connives at the army's breaches and abuses of the CFE treaty provisions. The generals know that each time he anxiously reminds the West of their bogey-like presence, he earns more economic concessions to shore up the political system which supports them.

A cool $100 billion might keep both him and them going for quite a long time. What the Soviet Union really needs is less expen- sive, but much more valuable: 200 million votes.