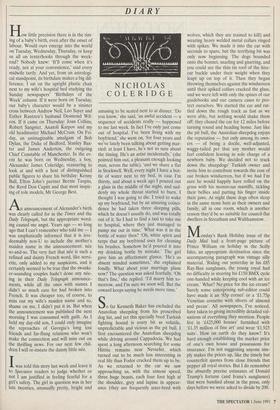 NICHOLAS COLERIDGE How little precision there is in the tim- ing of a baby's birth, even after the onset of labour. Would ours emerge into the world on Tuesday, Wednesday, Thursday, or keep us all on tenterhooks through the week- end? Nobody knew: 'It'll come when it's ready, not at your convenience,' said every midwife tartly. And yet, from an astrologi- cal standpoint, its birthdate makes a big dif- ference. I sat on the upright plastic chair next to my wife's hospital bed studying the Sunday newspapers' Birthdays of the Week' column. If it were born on Tuesday, our baby's character would be a sinister cross between Andrew Neil, Leo Sayer and Esther Rantzen's husband Desmond Wil- cox. If it came on Thursday: Joan Collins, Robert Sangster, Anatoli Karpov and my old headmaster Michael McCrum. On Fri- day, an unimaginable amalgam of Bob Dylan, the Duke of Bedford, Stanley Bax- ter and James Anderton, the outgoing Chief Constable of Manchester. In the ev- ent he was born on Wednesday, a boy, Alexander James Coleridge, reassuring to look at and with a host of distinguished public figures to share his birthday: Kenny Ball, Elton John's partner Bernie Taupin, the Revd Don Cupitt and that most inspir- ing of role models, Mr George Best.

An announcement of Alexander's birth was clearly called for in the Times and the Daily Telegraph, but the appropriate word- ing caused me angst. Years ago — so long ago that I can't remember who told me — I was emphatically informed that it is irre- deemably non-U to include the mother's maiden name in the announcement: née so-and-so. The very fact that née is such a refined and dainty French word, like servi- ette, only added to my suspicions, and it certainly seemed to be true that the swanki- er-sounding couples hadn't done any née- ing in their Daily Telegraph announce- ments, while all the ones with names I didn't so much care for had broken into French. It was cheaper too, of course, to miss out my wife's maiden name and so, shame on me, I didn't put it in. But when the announcement was published the next morning I was consumed with guilt. As I held my day-old son, I could only imagine the reproaches of Georgia's long lost friends and far-flung relations who won't make the connection and will miss out on the thrilling news. For our next few chil- dren I will re-instate the dainty little née.

Iwas told this story last week and leave it to Spectator readers to judge whether or not I am justified in feeling fearful for a girl's safety. The girl in question was in her late twenties, unusually pretty, bright and amusing to be seated next to at dinner. 'Do you know,' she said, 'an awful accident — a sequence of accidents really — happened to me last week. In fact I've only just come out of hospital. I've been living with my boyfriend,' she went on, 'for four years and we've lately been talking about getting mar- ried: at least I have, he's not so sure about the timing. He's an artist incidentally,' (she pointed him out, a pleasant enough looking man, across the table), 'and we share a flat in Stockwell. Well, every night I have a bot- tle of water next to my bed, in case I'm thirsty, and about a week ago I poured out a glass in the middle of the night, and sud- denly my whole throat started to burn. I thought I was going to die. I tried to wake up my boyfriend, but by an amazing coinci- dence he had taken three sleeping pills, which he doesn't usually do, and was totally out of it. So I had to find a taxi to take me to hospital, where they just managed to pump me out in time.' What was it in the bottle of water then? 'Oh, white spirit and turps that my boyfriend uses for cleaning his brushes. Somehow he'd poured it into my drinking bottle by mistake.' The girl gave him an affectionate glance. 'He's so absent minded sometimes,' she explained fondly. What about your marriage plans now? The question was asked fearfully. 'Oh that's fine,' she replied. 'I'd marry him to- morrow, and I'm sure we soon will. But the coward keeps saying he needs more time.'

So far Kenneth Baker has excluded the Anatolian sheepdog from his proscribed dog list, and yet this specially bred Turkish fighting hound is every bit as volatile, unpredictable and vicious as the pit bull. I first encountered the Anatolian sheepdog while driving around Cappadocia. We had spent a long afternoon searching for some Hittite remains near Nevsehir, which turned out to be much less interesting in real life than Fodor cracked them up to be. As we returned to the car we saw approaching us, with the utmost speed, three huge beasts, each four foot high at the shoulder, grey and lupine in appear- ance (they are frequently inter-bred with wolves, which they are trained to kill) and wearing heavy welded metal collars ringed with spikes. We made it into the car with seconds to spare, but the terrifying bit was only now beginning. The dogs bounded onto the bonnet, snarling and gnarring, and you could see the thin tin roof of the hire- car buckle under their weight when they leapt up on top of it. Then they began throwing themselves against the windscreen until their spiked collars cracked the glass, and we were left with only the spines of our guidebooks and our camera cases to pro- tect ourselves. We started the car and rat- tled down the rough track as fast as we were able, but nothing would shake them off; they chased the car for 12 miles before turning round and heading home. Just like the pit bull, the Anatolian sheepdog enjoys the reputation — but only among its own- ers — of being a docile, well-adjusted, waggy-tailed pet that any mother would feel confident leaving in sole charge of a newborn baby. We decided not to track down the sheepdogs' Turkish owner and invite him to contribute towards the cost of our broken windscreen, but if we had I'm sure he would happily have rolled on the grass with his monstrous mastiffs, tickling their bellies and putting his finger inside their jaws. At night these dogs often sleep in the same stone huts as their owners and family, all in one room, which is another reason they'd be so suitable for council-flat dwellers in Streatham and Walthamstow.

Monday's Bank Holiday issue of the Daily Mail had a front-page picture of Prince William on holiday in the Scilly Isles, an appropriate destination since the accompanying paragraph was vintage silly material. 'Riding out yesterday in his £85 Ray-Ban sunglasses, the young royal had no difficulty in steering his £150 BMX cycle one-handed while keeping cool with an ice cream.' What? No price for the ice cream? Surely some enterprising sub-editor could have made it an '85p cornet' or a 11.75p Venetian cornetto with slivers of almond and pecan'. All newspapers, I've noticed, have taken to giving incredibly detailed val- uations of everything they mention. People live in '1425,000 houses' furnished with '£1.35 million of fine art' and wear '£1,925 suits'. How on earth do they know? It's hard enough establishing the market price of one's own house and possessions for insurance. I'm not suggesting anyone sim- ply makes the prices up, like the timely but counterfeit quotes from close friends that pepper all royal stories. But I do remember the absurdly precise estimates of Donald Trump's fortune (and Ivana's sunglasses) that were bandied about in the press, only days before we were asked to divide by 200.