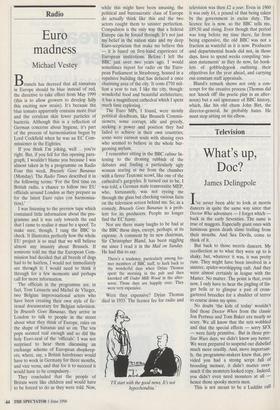 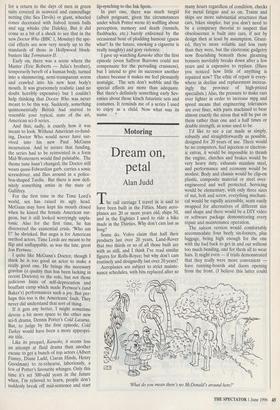 I've never been able to look at morris dancers in quite the same way since that Doctor Who adventure — I forget which — back in the early Seventies. The same is true of maggots. Especially giant ones with luminous green death slime trailing from their mouths. And Sea Devils, come to think of it.

But back to those morris dancers. My recollection as to what they were up to is shaky, but, whatever it was, it was pretty rum. They might have been involved in a sinister, spider-worshipping cult. And they were almost certainly in league with the Master. No matter. The point is that, even now, I only have to hear the jingling of fin- ger bells or to glimpse a pair of cross- gartered breeches for a shudder of terror to course down my spine.

No doubt 'the kids of today' wouldn't find those Doctor Whos from the classic Jon Pertwee and Tom Baker era nearly so scary. We all know that the sets wobbled and that the special effects — sorry SF'X — were fairly primitive. But in those pre- Star Wars days, we didn't know any better. We were prepared to suspend our disbelief much more readily. And, more important- ly, the programme-makers knew that, pro- vided you had a strong script full of brooding menace, it didn't matter over- much if the monsters looked ropy. Indeed, you didn't even need monsters at all — hence those spooky morris men. This is not meant to be a Luddite call for a return to the days of men in green suits covered in seaweed and camouflage netting (the Sea Devils) or giant, wheeled cones decorated with halved tennis balls and egg whisks (the Daleks). But it did come as a bit of a shock to see that in the new Doctor Who (BBC 1, Monday) the spe- cial effects are now very nearly up to the standards of those in Hollywood block- busters like Terminator II.

Early on, there was a scene where the Master (Eric Roberts — Julia's brother), temporarily bereft of a human body, turned into a shimmering, semi-transparent worm and crawled into his new host body's mouth. It was gruesomely realistic (and no doubt horribly expensive) but I couldn't help thinking that Doctor Who was never meant to be this way. Suddenly, something quintessentially British had started to resemble your typical, state of the art, American sci-fi series.

And that, sadly, is exactly how it was meant to look. Without American co-fund- ing, Doctor Who would never have sur- vived into his new Paul McGann incarnation. And to secure that funding, the series had to be reinvented in a form Mid-Westerners would find palatable. The theme tune hasn't changed; the Doctor still wears quasi-Edwardian garb, carries a sonic screwdriver, and flies around in a police- box-shaped Tardis. But there is now defi- nitely something amiss in the state of Gallifrey.

For the first time in the Time Lord's world, sex has raised its ugly head. McGann may have kept his mouth closed when he kissed the female American sur- geon, but it still looked worryingly unpla- tonic. Also for the first time, he has discovered the existential crisis. 'Who am I?' he shrieked. But angst is for American method actors. Time Lords are meant to be flip and unflappable, as was the late, great Jon Pertwee.

I quite like McGann's Doctor, though I think he is too good an actor to make a really good one. He brings the necessary gravftas (a quality that has been lacking in recent Doctors) to the role, but not those judicious hints of self-deprecation and bouffant camp which made Pertwee's (and Baker's) performances such a joy. But per- haps this too is the Americans' fault. They never did understand that sort of thing.

If it gets any better, I might sometime devote a bit more space to the other new sci-fi drama, Dennis Potter's Cold Lazarus. But, to judge by the first episode, Cold Turkey would have been a more appropri- ate title.

Like its prequel, Karaoke, it seems less an attempt at fluid drama than another excuse to get a bunch of top actors (Albert Finney, Diane Ladd, Ciaran Hinds, Henry Goodman) to re-rehearse, laboriously, a few of Potter's favourite whinges. Only this time it's set 300-odd years in the future when, I'm relieved to learn, people don't suddenly break off mid-sentence and start lip-synching to the Ink Spots.

In part one, there was much turgid (albeit poignant, given the circumstances under which Potter wrote it) waffling about perception, memory and death (tunnels, flashbacks, etc.) barely enlivened by the occasional bout of plodding humour (guess what? In the future, smoking a cigarette is really naughty) and gory violence.

I gave up watching ICaraoke after the first episode (even Saffron Burrows could not compensate for the pervading crassness), but I intend to give its successor another chance because it makes me feel pleasantly nostalgic. The sets don't wobble and the special effects are more than adequate. But there's definitely something early Sev- enties about those kitsch futuristic sets and costumes. It reminds me of a series I used to enjoy as a child. Now what was its name ... ?