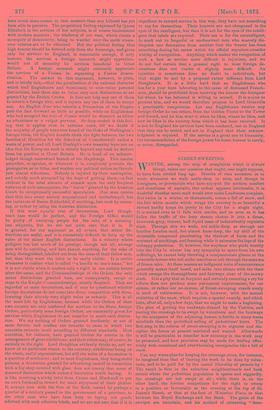 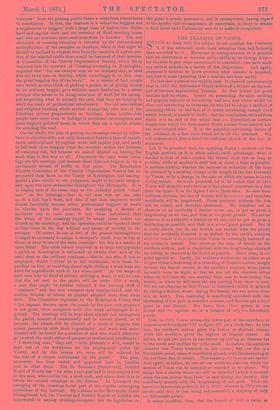 WINTER, among the crop of complaints which it always brings, raises one question that ought, one might suppose, to have been settled long ago. Months of rain accustom us to wade whenever we walk ankle-deep in mire, and though to foreigners, or provincials who have enjoyed the modern comfort and cleanliness of asphalte, this ordeal appears intolerable, it is doubtful whether mere mud would ever make Londoners complain. But twice in a winter, or thereabouts, comes a fall of snow, and the fair white mantle which wraps the country in so beautiful a shroud hardly keeps its purity in the City for a single night. It is stained even as it falls with smoke, and as soon as it has fallen the traffic of the busy streets churns it into a dense, brownish-grey, viscous, half-liquid mass of indescribably repulsive slush. Through this we wade, not ankle-deep, as through our familiar London mud, but almost knee-deep, the icy chill of the detestable compound penetrating the thickest of boots and the warmest of stockings, and freezing while it saturates the legs of the unhappy pedestrian. If, however, the wayfarer who plods wearily into the City in winter has any sympathy to spare from his own sufferings, he cannot help throwing a compassionate glance at the miserable horses who toil under omnibus or cab through the same sea of frozen mire. At these seasons an indignant voice of remonstrance generally makes itself heard, and sinks into silence with the thaw which sweeps the thoroughfares and footways clear of the snowy slush. It is a pity that so frequent and certainly recurring a cry for reform does not produce some permanent improvement, for our system, or rather our no-system, of Street-sweeping stands sorely in need of reformation. It is not, however, with the animal visitation of the snow, which requires a special remedy, and which lasts, after all, onlya few days, that we ought to make a beginning. The plan of getting the roadways cleaned by the Vestries, and leaving the crossings to be swept by volunteers and the footways by the occupants of the adjoining houses, is fertile in many worse mischiefs than the periodical soiling of pedestrians' boots. The first step in the reform of street-sweeping is to organise and dis- cipline the forces at present scattered and wasted. Afterwards it will be practicable to consider how economy in the work may be promoted, and how provision may be made for dealing effec- tively with occasional and overwhelming emergencies like a fall of snow.

Can any worse plan for keeping the crossings clean, for instance, be imagined than that of leaving the work to be done by volun- teers, and to be paid for by the casual liberality of passers-by ? The result is that in the suburban neighbourhoods and back streets where the pedestrian population is sparse and niggardly, the crossings are not swept at all ; while there is, on the other hand, the hottest competition for the right to sweep in a position so favourable as the crossing at the top of St. James's Street, or that at the foot of Waterloo Place, or that between the Royal Exchange and the Bank. The gains of the sweeper are uncertain, and his method of extracting " bene-

volences " from the passing public bears a suspicious resemblance to mendicancy. In fact, the business is a school for beggars and a supplement to beggary with a large class of loafers who dislike 'hard and regular work and the restraint of fixed working hours, and who are nowhere more numerous than in London. The real character of crossing-sweeping is revealed by the extraordinary multiplication of the sweepers on Sundays, when at first sight we ahould be inclined to suppose that from the cessation of a great por- tion of the wheeled traffic there would be less need of their services.

A Committee of the Charity Organisation Society, which lately inquired into the question of Crossing-sweeping in Kensington, 'reported that "for one sweeper seen on an ordinary day, at least live are to be seen on Sunday, which accordingly is to this class the great begging day of the week." As a matter of fact, people who would as soon think of picking a pocket as of giving money to an ordinary beggar, give without much hesitation to a street sweeper who seems to be doing some sort of work for the money, not suspecting what is actually the case, that they are helping to swell the ranks of professional mendicancy. The old associations and religious teaching which exalted almsgiving into one of the Christian virtues preponderate on Sundays, when middle-class people have more time to indulge in emotional extravagance and more brightly polished boots, in which they see a special reason for avoiding the mud.

On the whole, the plan of getting the crossings swept by volun- teers is objectionable, not only because it fosters a race of mendi- cants, undisciplined by_regular work and regular pay, and ready to fall back upon beggary when fine weather makes the business of sweeping dull, but because we cannot depend on having the work done in this way at all. Frequently the very worst cross- ings are left unswept, just because there does not happen to be a continuous stream of traffic at that point. The Kensington District Committee of the Charity Organisation Society has re- presented these facts to the Vestry of Kensington, and has sug- gested a plan which, in our judgment, ought to be made compul- sory upon the local authorities throughout the Metropolis. It is to employ men of the same class as the ordinary parish " road- men " on the crossings,—that is, old men who are not able to do a full day's work, and who if not thus employed would almost inevitably become either professional beggars or would be thrown upon the poor-rate. By assigning a district of moderate size to each man, it has been calculated that the whole of the crossings might be swept clean before ten o'clock in the morning ; and the operation could be repeated three or four times in the day without any excess of activity in the sweeper. Of course, in one or two of the greater thoroughfares it migut be necessary to assign a sweeper's whole time to two or three, or even to one of the main crossings ; but this is a matter of mere detail. The extra labour required in so large and populous a parish as Kensington is estimated at twenty-four men of the same class as the ordinary roadman,—that is, one who, if not so employed, would "either be in the workhouse, with those de- pendent on him, or receiving about eight shillings a week from the rates for unprofitable work in the stone-yard." As the wages of each man may be fixed at sixteen shillings a week, it will be seen that the net cost to the parish will be under £10 a week, a sum that might be further reduced if the existing staff of roadmen" and the new sweepers were amalgamated, and the useless division of labour at present adopted were done away with. The Committee represent to the Kensington Vestry that "the expense thrown upon the parish by the plan now proposed is not great, when compared with the many advantages to be .gained. The crossings will be kept clean always and throughout the parish, instead of occasionally and in certain places, as at present ; the streets will be cleared of a horde of beggars that annoy passers-by with their importunity ; and work and main- tenance will be found for a number of men who would otherwise _go to swell the ranks either of paupers or professional mendicants."

" A deserving man," they add, "with probably a wife, would be kept out of the workhouse by his employment under the Vestry, and by this means the rates will be relieved by the coat of a couple maintained by the parish." The plan, moreover, has been tested and approved both in London and in other cities. The St. Saviour's (Southwark) District Board of Works has "for some years past had in their employ four

or five men, who receive 14s. a week each, and whose duty it is to -sweep the several crossings in the district." In Liverpool the

sweeping of the crossings forms part of the regular scavenging operations of the borough. By a clause in the Metropolis Local Management Act, the Vestries and District Boards of London are empowered to employ crossing-sweepers ; but the legislation on this point is purely permissive, and in consequence, having regard to the apathy and incompetence of vestrymen, is likely to remain a dead letter until Parliament sees fit to make it compulsory.