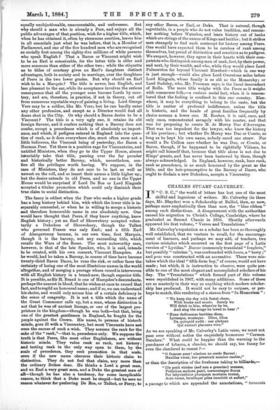 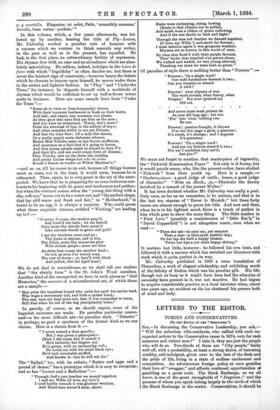 IN " C. S. C.," the world of letters has lost one of the most skilful and ingenious of writers. Mr. Calverley (in these days, Mr. Blaydes) won a Scholarship at Balliol, then, as now, perhaps more emphatically then than now, the " blue ribbon " among such distinctions. A disagreement with the authorities caused his migration to Christ's College, Cambridge, where he graduated as Second Classic in 1856. Shortly afterwards appeared his first volume, " Verses and Translations."

Mr. Calverley's reputation as a scholar has been so thoroughly

well established, that we venture to recall, for the encourage- ment of learners, and perhaps we may add, of teachers, two curious mistakes which occurred on the first page of a Latin version of " Lycidas." Baccar (commonly translated " foxglove," but possibly " valerian "), was confounded with bacca, a" berry ;" and prat was constructed with an accusative. These were mis- takes which the ideal " fifth-form boy," of course, would not have made ; but which, it is instructive to observe, were quite pos- sible to one of the most elegant and accomplished scholars of his day. The "Translations " which formed part of this volume were republished in 1867, with many additions. Some of these are as masterly in their way as anything which modern scholar- ship has produced. It would not be easy to surpass, or per- haps to match, this rendering of a stanza from " In Memoriam " : " We keep the day with festal cheer, With books and music. Surely we Will drink to him, whate'er he be,

And sing the songs he loved to hear :"

As we are speaking of Mr. Calverley's Latin verse, we must not pass over without notice the exquisitely humorous " Carmen Seculare." What could be happier than the warning to the purchaser of tobacco, a slander, we should say, too funny for

even the slandered to resent

In this volume, which, a few years afterwards, was fol-

lowed up by another, bearing the title of Fly - Leaves, Mr. Calverley worked a peculiar vein of humour with a success which we venture to think scarcely any writer, in the past as well as in the present, has equalled. He had, in the first place, an extraordinary facility of expression.

His rhymes flow with an ease and an abundance which are abso- lutely astonishing. He seldom, indeed, indulges in the tours de force with which " Ingoldsby " so often dazzles us ; but there is

never the faintest sign of constraint,—however heavy the fetters which he chooses to impose upon himself, he moves under them in the airiest and lightest fashion. In "Play " and " Under the Trees," for instance, he disports himself with a multitude of rhymes which would be sufficient to set up half-a-dozen minor poets in business. Here are some sample lines from " Under the Trees ":— " Some sit in twos or (less frequently) threes, With their innocent lambswool or book on their knees, And talk, and enact, any nonsense you please, As they gaze into eyes that are blue as the seas ; And you hear an occasional, Harry, don't tease !'

From the sweetest of lips, in the softest of keys; And other remarks which to me are Chinese.

And fast the time flies ; till a lady-like sneeze, Or a portly papa's more elaborate wheeze, Makes Miss Tabitha seize on her brown mnffatees, And announce as a fact that it's going to freeze, And that young people ought to attend to their P's And their Q's, and not court every form of disease ; Then Tommy eats up the three last ratafias,

Round a bosom as tender as Widow Machroe's;"

—and so on, till he comes to an end, because all things human must so come, not in the least, it would seem, because he is exhausted. Then, again, he is very great in the art of the unex- pected. We know that he is preparing for us some ludicrous con- trasts to his beginning with its grace and tenderness and pathos; but when the contrast comes, when the " young, fair thing with a

ehy, soft eye," turns out to be a water-rat, and "the perfect shape, that lay still warm and fresh and fair," in " Motherhood," is found to be an egg, it is always a surprise. Who could guess what these exquisite stanzas, entitled " Waiting," are leading up to ?

"0 come, 0 come, the mother pray'd, And hush'd her babe ; let me behold Once more thy stately form array'd Like autumn woods in green and gold!

I see thy brethren come and go ; Thy peers in stature, and in hue, Thy rivals, some like monarchs glow With richest purple; some are blue As skies that tempt the swallow back ; Or red, as seen o'er wintry seas, The star of storm ; or, bared with black And yellow, like the April bees:: We do not deal in conundrums, so we shall tell our readers that " the stately form " is the St. John's Wood omnibus. Another kind of the unexpected we have in such pieces as " Sad Memories," the sorrows of a misunderstood cat, of which these are a sample :- " Men prize the heartless hound who quits dry-eyed his native land, Who wags a mercenary tail, and licks a tyrant hand ; The real, true cat they prize not, that if e'er compelled to roam, Still flies when let out of the bag precipitately home."

In parody, of course, as we should expect, some of his happiest successes are made. He parodies particular poems, and—a far more difficult art—he parodies style. " Disaster " is, perhaps, as good a specimen of the former kind as we can choose. Here is a stanza from it :- " I never nursed a dear gazelle ; But I was given a parroquet- (How I did nurse him if unwell !) He's imbecile, but lingers yet.

He's green, with an enchanting tuft ; He melts me with his small black eye; He'd look inimitable stuffed, And knows it—but be will not die."

The " Ballad," too, with its refrain, " Butter and eggs, and a pound of cheese," has a prototype which it is easy to recognise; and so has "Lovers and a Reflection ":— " Through God's own heather we wound together, I and my Willie (0 love, my love!) I need hardly remark it was glorious weather, And flitter-bats waver'd alow, above. Boats were curtseying, rising, bowing (Boats in that climate are so polite), And sands wore a ribbon of green endowing, And 0 the sun dazzle on bark and bight !

Through the rare red heather we danced together, (0 love, my Willie !) and smelt for flowers; I must mention again it was gorgeous weather, Rhymes are so scarce, in this world of ours.

By rises that flush'd with their purple favours, Thro' becks that brattled o'er graver sheen, We walked and waded, we two young shavers, Thanking our stars we were both so green."

Of parodies of style there is nothing better than " Forever " " Forever ; 'tis a single word !

Our rude forefathers deemed it two; Can you imagine so absurd A view ?

Forever! what abysms of woe The word reveals, what frenzy, what Despair! For ever (printed so) Did not.

And never more must printer do As men did long ago; but run For ' into 'ever,' bidding two Be one.

Forever! passion-fraught, it throws O'er the dim page a glow, a glamour; It's sweet, it's strange; and I suppose It's grammar.

And yet our fathers deem'd it two ; Nor am I confident they err d; Are you ?"

We must not forget to mention that masterpiece of ingenuity,

the " Pickwick Examination Paper." Not only is it funny, but it would puzzle many, who, like the present writer, have studied " Pickwick " from their youth up. Here is a sample :— " lipeoaroyphlzmy: a good judge of cattle ; hence, a good judge

of character." " Note on .Esch., Ag.—Illustrate the theory involved by a remark of the parent Weller."

It has been doubted whether Mr. Calverley was really a poet.

Only once, as far as we remember, is be serious, and that is in the last ten stanzas of " Dover to Munich ;" but these forty verses are almost enough to prove his title. And now and then, when he is in his lightest mood, there is a touch of pathos in him which goes to show the same thing. The little maiden in " First Love " (possibly a reminiscence of " little Em'ly" in "David Copperfield") is not altogether comic, even when we read :— " There she sat—so near me, yet remoter Than a star—a blue-eyed, bashful imp; On her lap she held a happy bloater, 'Twist her lips a yet more happy shrimp."

It matters but little, however ; he followed his own bent, and followed it with a success which has enriched our literature with work which is quite perfect in its way.

Mr. Calverley published in 1869 a verse translation of Theocritus, a work of elegant scholarship, and exhibiting much

of the felicity of diction which was his peculiar gift. His life, though not as busy as it might have been had the stimulus of necessity been present in it, was not inactive. He had begun to acquire considerable practice as a local barrister when, about two years ago, an accident on the ice shattered his powers both of mind and body.