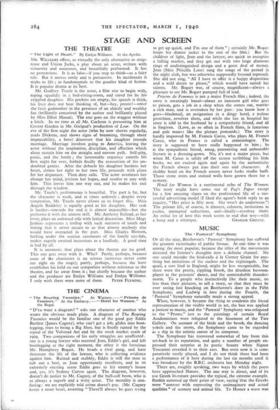 " The Roaring Twenties." At Warners.—" Prisons de Femmes." At the Embassy.—" Hotel for Women." At the Regal.

" D'YA want a diagram? " asks one character of another who wants the obvious made plain. A diagram of The Roaring Twenties would be the familiar one of the good guy Eddie Bartlett (James Cagney), who can't get a job, glides into boot- legging, rises to being a Big Shot, but is finally ruined by the repeal of the Volstead Act and by the stock market crash of 1929. Two companions of his early struggles are unaffected one is a young lawyer who married Jean, Eddie's girl, and left bootlegging at the right moment, the other is the ferocious Mr. Humphrey Bogart. He heads a rival gang, and later threatens the life of the lawyer, who is collecting evidence against him. Ruined and stubbly, Eddie is still the man to rub out a heel, as Jean opportunely recollects, and in an extremely exciting scene Eddie goes to his enemy's house and, yes, it's Sydney Carton again. The diagram, however, doesn't do justice to Mr. Cagney, of the bull-calf brow, who is as always a superb and a witty actor. The morality is con- fusing : we are explicitly told crime doesn't pay. (Mr. Cagney keeps a stout heart, asserting " There'll always be guys trying

to get up quick, and I'm one of them " ; certainly Mr. Bogart keeps his dinner jacket to the end of the film.) But the children of light, Jean and the lawyer, are quick to recognise a falling market, and they get out with two large diamond rings of undistinguished design and a great deal of money. Jean (Miss Priscilla Lane) sang the songs of the period in the night club, but was otherwise supposedly beyond reproach. She did not sing, " All I have to offer is a happy disposition and a wild desire to please," which would have suited her talents. Mr. Bogart was, of course, magnificent—always a pleasure to see Mr. Bogart pumped full of lead.

Prisons de Femmes is not a major French film ; indeed, the story is amazingly banal—about an innocent girl who goes to prison, gets a job in a shop when she comes out, marries a rich man, and is overtaken by her past : you know how it goes—blackmail, an assignation in a dingy hotel, a jealous prostitute, revolver shots, and while she lies in hospital her story is told to the husband by a sympathetic friend, and all is forgiven. (Love, as so often in French films, is luxurious and pale mauve like the picture postcards.) The story is hardly improved by M. Francis Carco, who plays M. Francis Carco, who in France is called a criminologist. The story is supposed to have really happened to him ; he is the sympathetic friend, smug, patronising and unbearably literary in a dressing-gown. No, it's not a major piece, but when M. Carco is safely off the screen scribbling his little books, we are excited again and again by the authenticity the French always put into their sets and characters. A shabby hotel on the French screen never looks studio built. Those stone stairs and stained walls have grown there for a century.

Hotel for Women is a sentimental echo of The Women. The story might have come out of Peg's Paper except for a few amusing slants on the professional life of a suc- cessful advertising model (I liked the agent's brisk reply to an inquiry, " Her price is fifty now. She won't do underwear.") The private life, of course, is dinners, cabarets, invitations to yachts, attempted seductions, and—finally—revolver shots. An awful lot of love this week seems to end that way—with