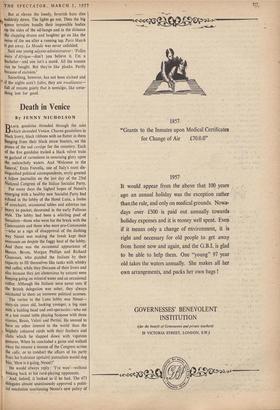 By JENNY NICHOLSON ••LAC/3 K gondolas threaded through the mist which shrouded Venice. Charon gondoliers in black livery, black ribbons with no flutter in them banging from their black straw boaters, set the Prows of the sad cortege for the cemetery. Each of the five gondolas trailed a black velvet train or garland of carnations in mourning glory upon the melancholy waters. And 'Welcome to the funeral,' Enio Forcella, one of Italy's most dis- tinguished political correspondents, wryly greeted a, fellow journalist on the last day of the 23rd National Congress of the Italian Socialist Party.

For many days the highest hopes of Nenni's emerging with a healthy new Socialist Party had echoed in the lobby of the Hotel Luna, a limbo of armchairs, occasional tables and ashtrays too heavy to pocket, decorated in the early Pullman style. The lobby had been a whirling pool of Socialists—those who were for the break with the Communists and those who were pro-Communist —who as a sign of disapproval of the dashing way Nenni was making the break kept their overcoats on despite the fuggy heat of the lobby. And there was the occasional appearance of Messrs. Bevan, Morgan Phillips and Richard Crossman, who puzzled the Italians by their Capacity to fill themselves like tanks with whisky and coffee, while they (because of their livers and also because they are abstemious by nature) were keeping going on mineral water and an occasional coffee. Although the Italians were never sure if the British delegation was sober, they always attributed to them an immense political acumen.

The vortex in the Luna lobby was Nenni- sixty-six years old, looking younger, a big man with a balding head and owl-spectacles—who sat at a low round table playing Scopone with three cronies, Basso, Valori and Pertini. He seemed to have no other interest in the world than the brightly coloured cards with their feathers and Clubs which he slapped down with vigorous gestures. When he concluded a game and walked away (to resume a session of the Congress across the calk, or to conduct the affairs of his party from his hAroom upstairs) journalists would dog him, 'How is it going, Nenni?'

He would always reply: 'I've won'—without looking back at his card-playing opponents.

And, indeed, it looked 'as if he had. The 673 delegates almost unanimously approved a politi- cal resolution sanctioning Nenni's new policy of

breaking with the Communists. But an hour after approving this resolution with clamorous ap- plause the delegates accorded him only one-third of the seats in the party's new Central Com- mittee. The unanimity of consent for the new policy, practically unbroken through five days of debate, was suddenly shattered. Even if Nenni had felt like playing Scopone that evening, Basso, Valori and Pertini were too busy lobbying in the sober anterooms of Ca'Justinian, where the voting was taking place, to give him an innocent game.

What had happened was that personal opponents in the party swelled the Communist- sponsored rumour that if he gained complete control Nenni intended to fire the party func- tionaries. Their salaries, which had been sub- sidised by the Communists, were now in danger; and they reacted blindly. A little group of them greeted Signora Nenni (a most distinguished woman—tall and proud) as she passed by. She rounded on them, weeping : 'It is not what you have done to my husband—but the wanton de- struction of the party. . . .' Even the gang of newsvendors crying the latest voting figures paused at her passionate tirade.

It took two days and a night at the Ca'Justinian to count the votes. At last Nenni went in a belted raincoat to sit at the voting table and hear his defeat read out in hard figures. A tangible de- pression engulfed all those who had come to Venice with such confident hopes, rippled out in ever-increasing circles all over Italy—the death blow to Socialist unification and the possibility that statesman Nenni was threatening to chuck his whole pack of cards _upon the Venetian waters and retire to his villa at Formia.

Nenni recalled to Venice all delegates who had left for Rome. and after white nights of discus- sion he was forced to a desperate compromise by confirming all the rebel bureaucrats in their jobs. His new policies, instead of blowing like a spring breeze through the whole of Italy— wafting his left wing into government power— are now filtering sluggishly through the party bureaucracy. One fancies one could hear the dulcet laughter of Mrs. Luce and of all the American journalists and diplomats who echoed her mistrust of. Nenni, the gloating sounds of Saragat who, always suspicious of Nenni, wrote from the Vice-Premier's chair : 'This is what comes of being a political manipulator and not believing in political principles.'

`0-hail—Prot/ill (`Left!') hailed the gondoliers In warning as they turned the corner. And the funeral cortege disappeared into the mists towards the cemetery on the Fundamento Nuovo.