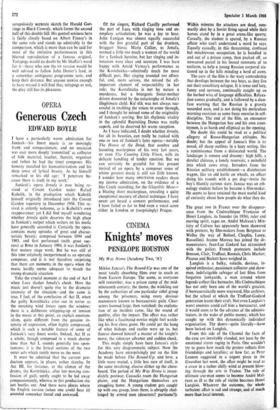 My Way Home (Academy Two, 'A') Miklos Jancso's The Round-Up was one of the most totally absorbing films ever to reach us from Eastern Europe. The scene, as everyone will remember, was a prison camp of the mid- nineteenth century; the theme, the winkling out by the authorities of one particular rebel group among the prisoners, using every devious manoeuvre known to bureaucratic guile. Char- acters loomed large, then vanished; the explana- tion of an incident came, like the sound of gunfire, after the impact. The effect was rather like what a fascinated novice might feel watch- ing his first chess game. He could get the hang of what bishops and castles were up to, but Jancso showed himself a master of the knight's move, the sideways advance and sudden check.

This might simply have been Jancso's style for this very diagrammatic subject. Now the Academy have enterprisingly put on the. film he made before The Round-Up, and here, a little more muted, a little less sure of itself, is . the same involving, elusive slither up the chess- board. The period of My Way Home is imme- diately postwar. Cossacks roam the Hungarian plains, and the Hungarians themselves are straggling home. A young student gets caught up with one group, loses them, is abruptly chal- lenged by armed men (deserters? partisans?). Within minutes the attackers are dead, sum- marily shot by a Soviet firing squad while their horses stand by in a great arena-like quarry. Casually, the student is spared, by a Russian officer who can't understand a word he says. Equally casually, in this threatening, confused but mischievous occupation, he is bundled in and out of a prison camp, then packed off, an unwanted parcel in his looted remnants of ss uniform, to help a young Russian corporal sta- tioned up in the hills minding a herd of cows.

The core of the film is the wary comradeship that develops between the two boys, as they live out their unmilitary eclogue. It is tense and lazy, funny and nervous, continually caught up on the barbed wire of language difficulties. Relaxa- tion comes gradually, and is followed by a slow- fuse warning that the Russian is a gravely wounded man, and is not doing his meticulous morning exercises as some fussy exercise in self- discipline. The end of the film, an encounter between the Hungarian boy and his own coun- trymen, is as harsh and elliptical as the opening.

No doubt this could be read as a political allegory of Russo-Hungarian attitudes. No doubt; but the appeal of Jancso's film is its mood, all sharp outlines in a hazy setting, like a reminiscence from a dislocated world. The landscape is remote and dreamy: high hills, a derelict château, a lonely reservoir, a minefield into which cows stray. Intruders from the Russian military establishment—a disinfectant wagon, like an old kettle on wheels, an officer doing his rounds with a pet dog—invite the boy's blankly curious stare. Jancso was an eth- nology student before he became a film-maker. He seems to have retained the most useful kind of curiosity about how people do what they do.

The great row in France over the disappear- ance from the Cinematheque Franeaise of Henri Langlois, its founder (in 1936), ruler and moving spirit, rages on. Andre Malraux's Min- istry of Culture has apparently been showered with protests, by film-makers from Bergman to Welles (by way of Btuluel, Chaplin, Losey, Rossellini). Jeanne Moreau has joined the de-. monstrators; Jean-Luc Godard has skirmished with the police; French protestors include Bresson, Clair, Truffaut, Resnais, Chris Marker; Picasso and Beckett have weighed in.

Langlois is a bulky, volatile, devious, in- spired enthusiast, passionate collector and show- man, indefatigable salvager of lost films from forgotten junkyards, a man around whom legends collect like barnacles. His Cinematheque has not only been one of the world's greatest, if bureaucratically more wayward, film archives, but the school at which the Truffaut-Godard generation learnt their craft. Not even Langlois's worst enemies could call him a bureaucrat, and it would seem to be the advance of the adminis- trators, in the wake of public money, which has caught up with this dynamically individual organisation. The doors—quite literally—have been locked on Langlois.

From this side of the Channel the facts of the case are inevitably clouded, not least by the emotional storm raging in Paris. One wouldn't try to guess how much the protest reflects firm friendships and loyalties; or how far, as Peter Lennon suggested in a cogent piece in the Guardian last week, the affair might be read as a straw in a rather chilly wind at present blow- ing through the arts in France. The role of ultimate axe-man seems to become Andre Mal- raux as ill as the role of victim becomes Henri Langlois. Whatever the outcome, the whole turbulent affair is sad and strange, and of much more than local interest.