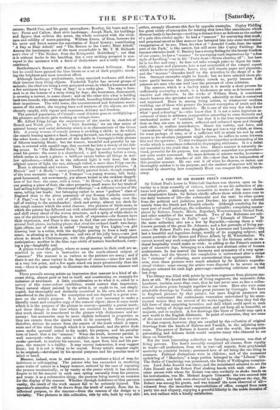 Sir Robert Peel's house in Whitehall Gardens was thrown open on Sa- turday to a large assembly of visitors, invited to see his collection of pic- tures and prints. Although not insensible to works of the more classic and imaginative kinds, Sir Robert chiefly affects those which come near to the daily business of life—the substantial and the real: he often quotes from the political and judicious poet Dryden; his pictures are selected mainly from the Dutch and Flemish schools. Although consisting for the most part of small paintings, the collection is valuable; comprising master- pieces by Rubens, Ostade, Miens, Ruysdael, 1Vouwermanns, Gerard Dow, and other notables of the same schools. Two of the Rubenees are cele- brated—the "Chapeau de Paille " and the " Triumph of Silenus." In the same collection also are a few by Reynolds,—among them a well- known portrait of the great Dr. Johnson; and a few portraits of living per- sons,—Sir Robert Peel's two daughters, by Lawrence and Landseer—the last a beautiful and ingenious design, worthy of its engaging subject; and recent portraits of the Queen and Prince Albert, by M. Winterhalter. We cannot accord any such complete admiration to the German artist as na- tional hospitality would make us wish: in adding to the Prince'a stature a pair of excessive legs belongig to a classic and abstract order of human architecture, he has ;naffed the harmony and symmetry of a very agree- able form and the Queen's fair complexion is embrowned after a recipe for "richness" of colouring, more conventional than appropriate. How- ever, even these pictures were much admired by Sir Robert's unprofes- sional visiters: some among the artists were disposed to be severe on the foreigner selected for such high patronage—muttering criticisms not loud but deep. The library was filled with prints by modern engravers from pictures mo- dern or old. We heard the father of living engravers, the venerable John Landseer, exclaim more than once, that he had never seen so fine a collec- tion of modern prints brought together in one view. Here also were some admirable drawings by Toschi, after great pictures by Correggio. We have in England pictures by that painter, but mere English amateurs can scarcely understand the enthusiastic veneration entertained by his coun- trymen unless they see several of his works together: then they feel the full force of that surprising invention and skill which could sport in such endless variety of design and composition, and yet keep all so beautiful, so majestic and so exalted. A few drawings like these of Toschi may open a new world to the English dilettante. In point of execution, they are some of the most excellent that we ever saw.

In that respect, however, they are excelled by the collection of original drawings from the hands of Rubens and Vandyk, in the adjoining ante- room. The power of Rubens is known all over the world; the exquisite painstaking and delicate finish would surprise many who chanced to see them on Saturday.

Not the least interesting collection on Saturday, however, was that of living persons. The host's assembly comprised all classes, from royalty to trade—all professions, from wit to war—all aspects, from grey headed austerity to youthful beauty; presumed love of art being the one thing in common. Political distinctions were in oblivion; and of the numerous sprinkling of "Members," a large portion belonged to the " Liberal " side. The Duke of Cambridge was prominent, the Duke of Wellington conspicu- ous. Lord John Russell was there; and the uninitiated admired to see the John Russell and the Robert Peel shaking hands with each other. An- other person with whom Sir Robert was seen cordially to shake hands on his introduction, was Mr. Michael Angelo Titmarsla: the two entered into conversation, and both were observed to laugh! Throughout the day, Sir Robert was among his guests, and was himself the most observed of all— released from the immediate responsibilities of office, escaped from mere party ties and cliquery, enjoying a graceful hilarity in the noble domains of art, and radiant with a kindly satisfaction.