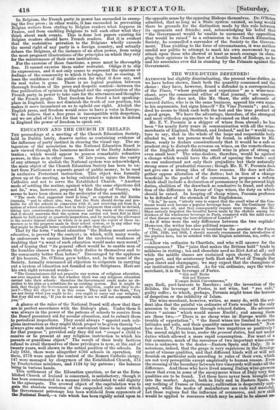 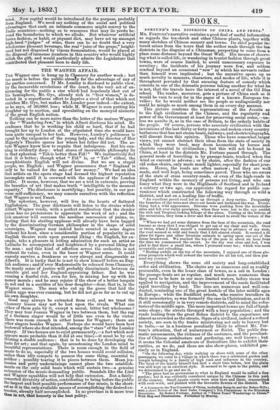 ALTHOUGH but slightly discriminating, the present wine-duties, as we have before shown, limit both the quantity consumed and the choice : they have, however, found a defender in a correspondent of the Times, "whose position and experience" as a wine-mer- chant, says the commercial editor of that journal, "are unques- tionable." He does not, like Mr. Shaw, the able advocate of lowered duties, who is in the same business, append his own name to his arguments, but signs himself "Ex Vino Pecunia" ; and in- deed he seems to think cash both the test and the true product of a good grape. We have the advantage, therefore, of the strongest and most orthodox arguments to be advanced on that side.

Mr. E. V. Pecunia is a shipper of wines from abroad ; he has been "for nearly forty years in communication with all the wine- merchants of England, Scotland, and Ireland," and he "would ven- ture to say, that in the whole of the large and respectable body alluded to, not ten persons would be found, in addition to Mr. Shaw, ready to declare conscientiously that it would be a safe or prudent step to disturb the revenue on wines, on the remote chance of the English people drinking small wine in place of strong or even small beer." The wine-dealers, therefore, would be against a change which would have the effect of opening the trade : and we can understand not only their prejudices but their naturally strong sense of prudential reasons; though Mr. E. V. Pecunia does not give one a strong idea of those reasons. He does not alto- gether oppose alteration of the duties; but in lieu of a change beneficial to the pocket of the consumer, he proposes a reform which shall include a declaration of permanency in the present high duties, abolition of the drawback as conducive to fraud, and aboli- tion of the difference in favour of Cape wines, the duty on which should be raised. In keeping off cheap wines, Peounia professes to be defender of the stomach of the Englishman.

"It is," he says, "utterly vain to expect that the small wine of the Con- tinent would ever become a popular beverage here. On the Continent they consume more oil, and they consequently require more vinegar. Has Mr. Shaw entirely forgotten the dreadful havoc made by the cholera among the drinkers of his wholesome beverage in Paris, compared with the mild career of that disease among the beer-drinkers of London ? "

— As if wine were the only difference between the two capitals ! However, the writer has also political reasons-

" Truly, if sipping light wines at breakfast be the practice of the Furies of 1789, 1830, and 1848, I should scarcely recommend the introduction of the practice here, but be satisfied with the English substitute, tea, coffee, or cocoa."

— Allow vin ordinaire to Chartists, and who will answer for the consequences ? The "juice that makes the Britons bold" tends to mildness in rioting; tea and chocolate need no Riot Act at all ; and while the middle classes are sustained upon sherry, the church upon port, and the aristocracy both East and West of Temple Bar upon claret and champagne, we may expect that the champions of our institutions will prevaiL As for yin ordinaire, says the wine- merchant, it is the beverage of Furies.

says Redi, poet-laureate to Bacchus ; only the invention of the Belides, the beverage of Furies, is not wine, but " reo café," guilty coffee ; to which, perhaps, Pecunia might trace the horrors of despotism or the infidelity of Islam. The wine-merchant, however, writes, as many do, with the evi- dent idea that the painful yin ordinaire of Paris would be the only accession to the consumer through relaxed duties. He advances divers " axioms " which would amuse Euclid ; and among them are these two,—" There is no cheap wine in Europe worth the trouble of exportation" ; " the finest wines are limited to certain latitudes and soils, and their quantity cannot be increased." Now how does E. V. Pecunia know those two negatives so positively? The second might be true, under the present duties, but not under duties which allowed a more rapid consumption. For want of a fair commerce, much of the resources of two important wine-coun- tries is unknown to the dealer—Eastern Spain and Italy. It is notorious, indeed, that the grape is very capricious in the develop- ment of vinous qualities, and that different kinds will or will not flourish on particular soils according to rules of their own, which are not very perceptible except empirically to human reason. Even the crossing of the boundary between two vineyards will make all the difference. And those who have lived among Italian wine-growers know that even in some of the anonymous wines of Italy very fine qualities are to be found. Yet these have never been brought out into the market. Again, both in Italy and in Eastern Spain, to say nothing of France or Germany, cultivation is desperately anti- quated, while the modes of manufacture are rude and wastefnl- Let those regions feel the influence of commerce, and new skill would be applied to resources which may be said to be almost un-

tried. New capital would be introduced for the purpose, probably from England. We need say nothing of the social and political advantages that such an intimate commerce might convey to the Italic countries—nothing as to resources that may lie perdu be- yond the boundaries to which we allude. But whatever artificial tastes fashion, or habit, or piquant diet, may have set up amongst high-bred "judges" of wine, there can be no doubt that a very wholesome pleasant beverage, the real "juice of the grape," height- ened but not disguised by vinous fermentation, would be placed at the disposal of immense numbers in this country who would highly relish the gift, and would particularly admire the Legislature that contributed that pleasant boon to daily life.