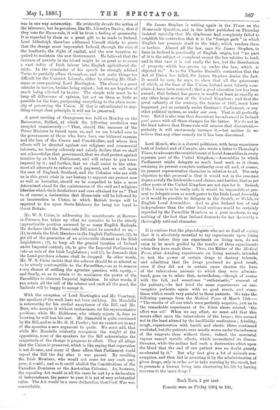 A great meeting of Orangemen was held on Monday on

the Racecourse, Belfast, at which the following resolution was accepted unanimously ; —" That, should this measure of the Prime Minister be forced upon us, and we are handed over to the government of those who have been our bitterest enemies and the foes of the Crown and Constitution, and whose first efforts will be directed against our religions and commercial interests, we hereby solemnly and calmly declare that we shall not acknowledge that government, that we shall protest against taxation by an Irish Parliament, and will refuse to pay taxes imposed by it; and further, that we shall resist to the utter- most all attempts to enforce such payment, and we call upon the men of England, Scotland, and the Colonies who are with us in this great crisis in our history to support our protest now as well as hereafter, should we be compelled to take a more determined stand for the maintenance of the civil and religions liberties which their forefathers and ours obtained for us." That is, of course, a declaration that Home-rule will be followed by an insurrection in Ulster, in which British troops will be required to fire upon Scoto-Irishmen for being too loyal to Great Britain.