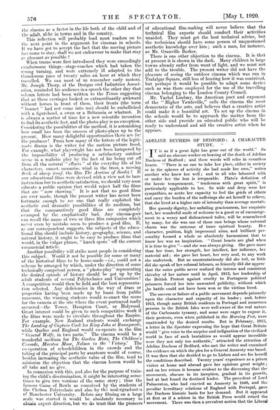 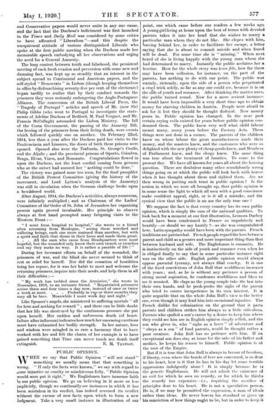 T is as if a great light has gone out of the world." So

1 said an obscure worker on hearing of the death of Adeline Duchess of Bedford ; and these words will echo in countless hearts. "There is no one to take her place, either in society or in the spheres of activity she had made her own," writes another who knew her well ; and to all who laboured with or under her the loss is irreparable. Plato's definition of the heroic temperament, "tenderness with great spirit," is particularly applicable to her. So wide and deep were her sympathies, so acute her capacity to feel the griefs of others and carry the burden of the sufferings she set herself to relieve, that she lived at a higher rate of intensity than average mortals.

Her queenly dignity, her unfailing graciousness, her exquisite tact, her wonderful smile of welcome to a guest or of encourage- ment to a weary and disheartened toiler, will be remembered by many, for she was one of those rare beings whose external charm was the outcome of inner spiritual beauty. Her character, position, high impersonal aims, and brilliant per- sonality formed a whole so absolutely harmonious that to know her was an inspiration. "Great hearts are glad when it is time to give "—and she was always giving. She gave more than her time, her strength, her intellect; her influence, her material aid ; she gave her heart, her very soul, to any work she undertook. But so unostentatiously did she toil, so little did she speak of her colossal labours, so leisurely did she appear that the outer public never realized the intense and consistent chivalry of her nature until in April, 1913, her leadership of the British Protest against cruelty to Portuguese political prisoners forced her into unwonted publicity, without which the battle could not have been won or the victims freed.

The success or failure of a public movement depends primarily upon the character and capacity of its leader ; and, before 1913, though many British residents in Portugal and numerous persons in the British Isles were well aware of the real nature of the Carbonario tyranny, and some were eager to expose it, their protests, even when published in the Morning Post, were unattended by the desired results. But in February, 1913, a letter in the Spectator expressing the hope that Great Britain would "give voice to the surprise and indignation of the civilized world in face of such brutalities as would appear incredible were they not only too authentic," attracted the attention of Adeline Duchess of Bedford, who met the writer and examined the evidence on which the plea for a General Amnesty was based. It was then that she decided to go to Lisbon and see for herself the conditions described. Twenty years' experience as a prison visitor at home and abroad gave her opinions great weight ; and on her return it became evident to the discerning that the movement, obscure in its inception, gradual in its growth, had at last -found its destined leader. The precedent of Lord Palmerston, who had exacted an Amnesty in 1846, and the peculiar hereditary relations of England with Portugal, gave the Duchess historic basis for her demand. But it appeared at first as if a schism in the British Press would retard the movement. There was then a prevalent notion that the Liberal and Conservative papers would never unite in any one cause, and the fact that the Duchess's indictment was- first launched in the Times and Daily Mail was considered by some critics to have affronted "Liberalism "—and this despite the unequivocal attitude of various distinguished Liberals who spoke at the first public meeting when the Duchess made her memorable speech embodying all her observations and urging the need for a General Amnesty.

The long contest between truth and falsehood, the persistent meeting of each fresh evasion and perversion with some new and damning fact, was kept up so steadily that an interest in the subject spread to Continental and American papers, and the self-styled " Democrats " in Lisbon (though keeping themselves in office by disfranchising seventy-five per cent. of the electorate) began tardily to realize that by their conduct towards the prisoners they were seriously endangering the Anglo-Portuguese Alliance. The conversion of the British Liberal Press, the "Tragedy of Portugal" articles and speech of Mr. (now Sir) Philip Gibbs (who went to Portugal to investigate the state- ments of Adeline Duchess of Bedford, M. Paul Vergnet, and Mr. Francis McCullagh) astounded the Lisbon Ministry. The fall of the Costa Government, the passing of the Amnesty Bill, the freeing of the prisoners from their living death, were events which followed quickly one on another. On February 22nd, 1914, less than a year after the Duchess paid her visits to the Peniteneiaria and Limoero, the doors of both these prisons were opened. Opened also were the Trafraria, St. George's Castle, and the Aljube ; and the provincial prisons of Oporto, Coimbra, Braga, Elves, Vizeu, and Monsanto. Congratulations flowed in upon the Duchess, not the least cordial coming from persons who at the outset had assured her "nothing could be done."

The victory was gained none too soon, for the final pamphlet of the British Protest Committee (giving the history of the movement, and Lord Lytton's analysis of the Amnesty) was still in circulation when the German challenge broke upon a bewildered world.

After August, 1914, the Duchess's activities, always numerous, were infinitely multiplied ; and as Chairman of the Ladies' Committee of theOrder of St. John of Jerusalem her organizing powers again proved invaluable. Her principle to observe always at first hand prompted many fatiguing visits to the Western Front :—

"I went from hospital to hospital," she wrote to a friend after returning from Boulogne, "seeing these wrecked and suffering beings, each one more maimed than another, but with a spirit and faith that shone in their faces and made them great. . . . All the men who came from Headquarters were most hopeful, but the wounded only know their own trench or trenches and say they make no 'way. It is rather a parable of life ! "

During her incessant efforts on behalf of the wounded, the prisoners of war, and the blind she never seemed to think of rest or relief for herself. Nor did the cessation of hostilities bring her repose, for it was her habit to meet and welcome the returning prisoners, inquire into their needs, and help them in all their difficulties :— .

"My work has trebled since the Armistice," slie wrote in November, 1918, to an intimate friend. "Repatriated, prisoners arrive three and four times a day now, instead of once or twice a week at most. . . . Probably in two or three months they may all be here. Meanwhile I must work day and night."

Like Spenser's angels, she ministered to suffering mortals "all for love and nothing for reward " ; and there can be little doubt that her life was shortened by the continuous pressure she put upon herself. Her sudden and unforeseen death (of heart. failure after influenza) indicates how much her unceasing exertions must have exhausted her bodily strength. In her nature, love and wisdom were mingled in so rare a harmony that to have worked with her and felt the charm of her example is to have gained something that Time can never touch nor death itself