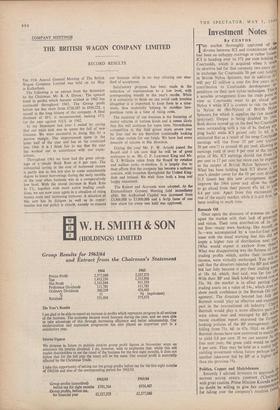 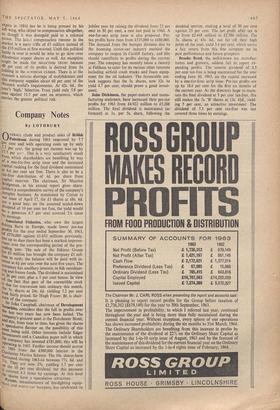 THE market thoroughly approved of ths. divorce between ICI and COURTAULDS whim had been an unhappy marriage or rather liaise°, ICI is handing over its 374 per cent holding in Courtaulds, which it acquired when it made its abortive bid for that company two years ago, in exchange for Courtaulds 50 per cent holdiq in British Nylon Spinners, but in addition ICI will pay £2 million a year for five years as contribution to Courtaulds development el. penditure on their new nylon techniques. This 13, a sensible arrangement from the trade point of view as Courtaulds want to go ahead With Nylon 6 while ICI is content to ride the WO in Nylon 66 (Bri-Nylon) of British NYI°,1 Spinners for which it supplies the raw mater ,7 (polymer). Output is being doubled by 196 Both shares moved up on the deal but Courtaulds were outstanding with a rise of 8s. (before slii; ping back) while ICI gained only Is. 6d. It Is estimated that as a result of the swap Courtaut earnings will rise from 25 per cent (carre' 30 per cent?) to around 40 per cent, allowing earnings yield of over 9 per cent at the curreilt price of 86s. ICI earnings should rise from 1501 per cent to 17 per cent but more can be expect as the output of British Nylon Spinners rises' What has been holding back ICI shares is I37, year's slender cover for the 10 per cent divided (1.3 times) but this new arrangement shot', improve the 1964 cover and allow the to go ahead from their present 45s. 6d. to Y,1,7 4.4 per cent. Apart from this excitement rest of the equity market, while it is still firm, Ii been tending to mark time.

Once again the directors of faiumAtt OIL hate upset the market with their lack of generosly and vision. Their total distribution of 2s. tax free—many were banking, like myself, 3s.—was accompanied by a one-for-four seil issue with the usual warning that this did 0' imply a higher rate of distribution next Yell; (Who would expect it anyhow from thoril What was disappointing was the flatness of their trading profits which, unlike their investrnert income, were virtually unchanged. You will ro call that the directors rejected the BP and sli_e`- bid last July because it put their trading assets at 18s. 6d. which, they said, was far too I With their BP and Shell holdings valued 110W,e 53s. 9d. the market is in effect putting thvii trading assets on a value of 14s., which does rill, show much confidence in the Burmah Oil [113 agement. The directors boasted last July ,th:t Burmah would 'play an effective and expoolv part in the international oil industry.' Cllf Burmah would play a more effective part aose were taken over and managed by BP, Wtt,i, recent excellent report expressed the forW3,"; looking policies of the BP management. Al1;1 falling from 71s. 6d. to 67s. 101d. ex divide

to yield 6.8 per cent. If we can assume 3s. rif free next year, the gross yield would be ile34. 8 per cent. They may be held as a useful htiti yielding investment whose future perhaps lie5ej another take-over bid by BP at a higher Ir, than the previous 75s.

Recently I advised investors to approach BRITISH SOUTH AFRICA COMPANY CCharIC70 with great caution. Prime Minister Kaunda Oiop no doubt be willing to give fair compeasa for taking over the company's royalties (Wtto expire in 1984) but he is being pressed by his left wing, who object to compensation altogether, as though it was danegeld paid to a colonial power. The late.A compensation rumour in the market is a mere trifle of £5 million instead of the £35 million at first mooted. Until this political battle is over it would be wise to go slow over Rhodesian copper shares as well. An exception might ig■ be made for SELECTION TRUST because 40 per cent of its profits is derived from its holding in the A!. 3: RICAN CLIMAX. There is at the moment a serious shortage of molybdenum and this company supplies about 60 per cent of the Western world's requirements. At 42s. 6d., the Year's 'high,' Selection Trust yield only 5.8 per Cent against 11.7 per cent on NCHANGA, which carries the greater political risk.