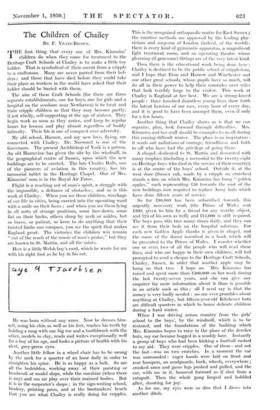 The Children of Chailey

THE first thing that every one of Mrs. Kimmins' children do when they come for treatment to the Heritage Craft Schools at Chailey is to make a little toy ladder. That is symbolical of their ascent from a cripple to a craftsman. Many are never parted from their lad- ders ; and those that have died before they could take their place as workers in the world have asked that their

ladder should be buried with them. .

The aim of these Craft Schools (for there are three separate establishments, one for boys, one for girls and a hospital on the seashore near Newhaven) is to treat and train cripple children so that they may become partly, if not wholly, self-supporting at the age of sixteen. They begin work as soon as they arrive, and keep to regular hours for lessons and play almost regardless of bodily infirmity. Their life is one of conquest over adversity.

My old school, Harrow, and my new love, flying, are connected with Chailey. Dr. Norwood is one of the Governors. The present Archbishop of York is a patron. An old Harrovian has given the site by the windmill, in the geographical centre of Sussex, upon which the new buildings are to be erected. The late Charles Rolls, one of the pioneers of aviation in this country, has his memorial tablet in the Heritage Chapel. One of Mrs. Kimmins' sons is in the Royal Air Force.

Flight is a reaching out of man's spirit, a struggle with the impossible, a defiance of obstacles ; and so is this work at Chttiley. When you see these children, wreckage of our life in cities, being carried into the operating ward with a smile on their faces ; and when you see them lying in all sorts of strange positions, some face-down, some flat on their backs, others slung by neck or ankles, but so brave, so patient, so keen to do anything that their twisted limbs can compass, you see the spirit that makes England great. The victories the children win remain " out of the reach of the music of man's praise," but they are known to St. Martin, and all the saints.

Here is a little Welsh boy's card, which he wrote for me with his right foot as he lay in his cot.

He was born without any arms. Now he dresses him- self, using his chin as well as his feet, washes his teeth by holding a mug with one big toe and a toothbrush with the other, models in clay, reads and writes exceptionally well for a boy of his age, and looks a picture of health with his alert, grey-green eyes.

Another little fellow in a wheel chair has to be swung by the neck for a quarter of an hour daily in order to straighten his spine. He is as happy as a lark. So are all the bedridden, working away at their painting or beadwork or model ships, while the sunshine (when there is any) and sea air play over their maimed bodies. But it is in the carpenter's shops ; in the sign-writing school, bindery, printing press, and at the bootmakers' bench that you see what Chailey is really doing for cripples. This is the recognized orthopaedic centre for East Sussex ; the curative methods are approved by the leading phy- sicians and surgeons of London (indeed, of the world) : there is every kind of gymnastic apparatus, a magnificent light treatment room, and an operating theatre whose gleaming (if gruesome) fittings are of the very latest kind.

Then there is the educational work being done here : Chailey is destined to be the public school of crippledom, and I hope that Eton and Harrow and Winchester and our other great schools, whose pupils have so much, will do all in their power to help their comrades over stiles that look terribly large to the visitor. This work at Chailey is England at her best. We are a strong-kneed people : three hundred dauntless young lives show forth the latent heroism of our race, every hour of every day, and it is good to have been amongst them, even if only for a few hours.

Another thing that Chalky shows us is that we can organize, plan, look forward through difficulties. Mrs. Kimmins and her staff should be examples to us all during this coming difficult winter. The place is an inspiration : it sends out radiations of courage, friendliness and faith to all who have had the privilege of going there.

A chapel, dedicated to St. Martin and decorated with many trophies (including a memorial to the twenty-eight ex-Heritage boys who died in the service of their country), is at the centre of the boys' school. Outside it, at the west door (Sussex oak, made by a cripple on crutches) stands a tree on which Mrs. Kimmins has hung " golden apples," each representing £50 towards the cost of the new buildings now required to replace Army huts which have done fifteen years of service.

So far £10,000 has been subscribed towards this urgently necessary work (the Prince of Wales sent £500, given to him by a friend for any worthy object, and £25 of his own as well) and £15,000 is still required. The boys pass this tree many times daily, and they can see it from their beds on the hospital solarium. For each new Golden Apple thanks is given in chapel, and the name of the donor inscribed in a book which will be presented to the Prince of Wales. I wonder whether one or even two of all the people who will read these lines, and who are happy in their own children, will feel prompted to send a cheque to the Heritage Craft Schools, Chalky, Sussex, in order that another apple nmy be hung on that tree. I hope so. Mrs. Kimmins has raised and spent more than £500,000 on her work during the last twenty-seven years, and she can give any enquirer far more information about it than is possible in an article such as this ; all I need say is that the money is very badly needed : no one ever grumbles about anything at Chailey, but fifteen-year-old Kitchener huts are difficult quarters in which to house delicate children during a hard winter.

When I was driving across country from the girls' school to the boys', by the windmill, which is to be restored, and the foundations of the building which Mrs. Kimmins hopes to raise in the place of the derelict huts, my car became bogged in a muddy lane. Instantly a group of boys who had been kicking a football rushed to my aid. They were cripples. One of them—and not the last—was on two crutches. In a moment the car was surrounded : eager hands were laid on front and rear bumpers, on mudguards, back, wheels, everywhere ; crooked arms and game legs pushed and pulled, and the car, with me in it, bounced forward as if shot from a catapult. Then the whole gang limped and hobbled after, shouting for joy.

As for me, my eyes were so dim that I drove into another ditch.