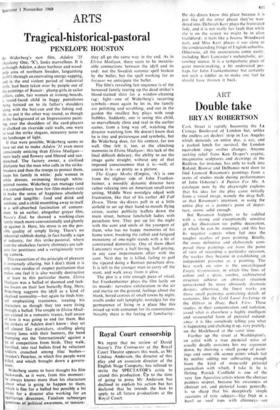 Bo Widerberg's new film, Adalen '31 (Academy One, 'X'), looks marvellous. It is as though Adalen, a dour harbour and wood- pulp area of northern Sweden, languishing in 1931 through an enervating energy-sapping, and in the end violent period of industrial strife, had been taken over by people out of the paintings of Renoir: plump girls in sailor collars, calm, fair women at ironing-boards, a round-faced child in baggy pantaloons being hoisted on to its father's shoulders along with the bait-can and the fishing rod. Or. to put it the other way round, as though in the background of an Impressionist paint- ing, over the shoulders of the card-players or chalked on riverside café walls, one were to read the strike slogans, minatory notes in the landscape of light.

If that were possible, Widerberg seems to have set out to make Adalen '31 even more consciously enticing than Elvira Madigan— more leafy and flowery and filtered and sun- drenched. The factory owner, a civilised dilettante but the man who calls in the strike- breakers and then the troops to protect them, keeps his family in white: pale women in white dresses, swimming through white- painted rooms. Widerberg can manage (and it is extraordinary how few film-makers can) to make the sense of happiness absolutely direct and tangible: food and drink and sunshine, and a child mumbling away to itself in a self-absorbed fascination of content- ment. In an earlier, altogether greyer film, Raven's End, he showed a working-class family much more conventionally and glumly up against it. Here, his stress is on the pos- sible quality of simply living. There's no industrial rubbish-dump, in fact hardly a sign of industry, for this strike-pastoral, where even the smokeless factory chimneys are sub- jects for prettiness and a vertiginously turn- ing camera.

This reassertion of the principle of pleasure is immensely alluring, but I don't think it is only some residue of suspect puritanism that makes one feel it is also weirdly destructive -at least to this particular theme. Elvira Madigan was a ballad of doomed and feck- less lovers on their last butterfly fling. Here, Widerberg suggests the idyll as a kind of idealised normality—but again he finds him- self emphasising transience, treating his characters as though they too were living through a ballad. The couple in Elvira Madi- gan existed in a romantic trance, half-aware of how it was going to end for them. But the strikers of Adalen don't know: they set off almost like picnickers, strolling along country lanes with their banners, the band thumping out the 'Internationale' against a lot of competition from birds. They walk, horrified, into real bullets fired by reluctant soldiers crouched among lilac bushes— Sweden's Peterloo, in which five people were killed, and which brought down a govern- ment.

Widerberg seems to have thought his film backwards, as it were, from this moment: he always knows more than his characters about what is going to happen to them, which is fine for a ballad but possibly a bit tricky for a director also working for an egalitarian directness. Fatalism submerges questions of political awareness, or tension :

they all go the same way in the end. As in Elvira Madigan, there seem to be inextric- able connections between the idyll and its end: not the Swedish summer spell broken by the bullet, but the spell working for us because we anticipate the bullet.

The film's revealing last sequence is of the bereaved family tearing up the dead striker's blood-stained shirt for a window-cleaning rag : light—one of Widerberg's recurring symbols—must again be let in, the family are polishing and scrubbing, and out in the garden the smallest boy plays with soap bubbles. Suddenly, one is seeing this child, so marvellously close and real in the earlier scenes, from a long way off, watching the director watching him. He doesn't know that he is tiny and picturesque and symbolic, but Bo Widerberg does, for his context, far too well. One felt it, too, at the clinching moments in Elvira Madigan: this lack of the final difficult delicacy, the ability to see the image quite straight, without any of that imposed consciousness that it is—well, of course it is—as pretty as a picture.

The Gypsy Moths (Empire, 'A') is one from the slighter side of John Franken- heimer, a moodily dynamic director here rather relaxing into an American small-town setting, Middle West nostalgia edged with frustration, like that of his earlier All Fall Down. Three sky-divers pull in at a little airfield to set up their hand-to-mouth flying circus, scatter publicity leaflets down the main street, bemuse lunchclub ladies with parachute lore. They put up for the night with the aunt and uncle of the youngest of them, who has no happy memories of his home town, breaking the raffish and fatigued monotony of one-night stands with a bit of constrained domesticity. One of them (Burt Lancaster) starts a half-loving, half-pitying, in any case impermanent affair with the aunt. Next day he is killed, failing to pull the ripcord doing a Batman parachute dive. It is left to the younger man to carry off the stunt, and walk away from it alive.

The plot is a trite enough piece of ritual, but Frankenheimer plays the film lazily on its moods: nerveless exhilaration in the air and inertia on the ground, feelings about the blank, bored centres of small towns by night, strolls under soft lamplight, nostalgia for the permanence of living in a place like this mixed up with contempt for its constrictions. Notably there is the feeling of familiarity :

the sky-divers know this place because it is just like all the other places they've wan- dered into. Deborah Kerr plays the frustrated lady, and it is not really her fault that while she is on the screen we might be in alien Guildford: it feels like a Joanne Woodward part, and Miss Kerr places it too close to the condescending fringe of English suburbia. Otherwise, all the associations come easily, including Burt Lancaster's melancholic, air- cowboy stance. It is a sympathetic piece of quiet movie-making, a bit undersized per- haps for John Frankenheimer but certainly not such a tiddler as to make one feel he should have thrown it back.