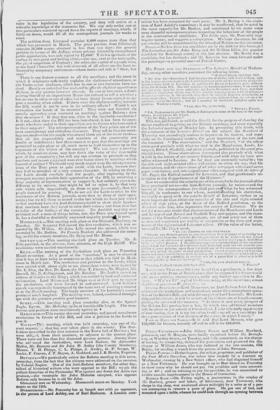 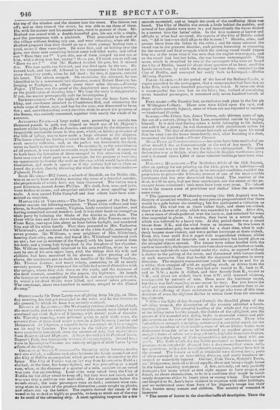 Morgan, were finally vxdnlineti before Mr. Brongha ton, at 'Worship Street, on Tuesday, and frilly committed, on the charge of having, hy conspiring, defeated the prosecution and procured the dis- charee of William Jones, who was indicted at time late sessions, Old Bailey, for stealing a watch from the person of John Newman.

PENNT Pa PERS.— Healer' ngton , the editor, proprietor, and publisher of the Poor Man's Guardian, was taken into custody IT a warrant on Wednesday evening by it Bow Street officer, who had disguised himself as a New Policeman. Ile was brought up to Bow Street on Thursday to show cause why he should riot pay the penhlties and costs amount- ing to 401.; and on refusing to pay the penalties, he was committed to twelve months imprisonment in the House of Correction.

ROBBER SIIOT.—On Friday night, a journeyman in the employ of Mr. Barford, grocer and baker, of Silverstone, near Towcester, who sleeps in the shop, was awakened about midnight by a noise as of a per- son attempting to remove a pane of glass. He got out of bed, and mounted upon G table, whence he could look through an opening between the top of the window. and the shutter into the street. The thieves ran off; and as. they crossed- the street, he was able to see three of them.

Ile, with his master and his master's son, went in pursuit of them. Mr:

Barford was armed with a double-barrelled gun, his son with a single, and the journeyman with a pitchfork. They proceeded to the end of

the village without finding any one, and were returning, when old Mr. ilarford proposed that they should go up a short passage leading into a rI.7aad, to see if they were there. He went first, and on looking over the gate, saw three men- crouching behind some hall-filled sacks, and called out " Here they are !" Upon this, one of them jumped up and ran at him, with a sharp iron bar, saving " D—n yon, I'll teach you to call out

'1. Here we are !' " Old BIr. Barford levelled his gun, but it missed fire. The man again ran forward, and was fired upon by the son. He turned back, and ran off, followed by his companions ; but had not got more than forty yards, when he fell dead : the shot, it appears, entered Lis heart. The others escaped. On examining the deceased, he was identified to be a notoriously had character, named. Robert Howard, be- longing to ratilspury, a village about three miles distant.—Evening Paper. [Where was the proof of the slaughtered man being a robber, or the justification of shooting him ? We hope the story is exaggerated ; if not, the matter peremptorily calls for investigation.] Iticrsinraufsm.—On the night of Sunday last, the large barn, sta- lling, and cow-house attached to Chadderton Hall, and containing the whole crops of wheat, oats, and hay for the year, was discovered to be on ; and, notwithstanding every exertion made to arrest the progress of the flames, was entirely consumed, together with nearly the whole of its contents.

ATTEMPTED FRAUD .—A large sealed case, purporting to contain ten thousand pounds in gold, was shipped on board one of his Majesty's packets whilst lying at Rio de Janeiro, and consigned by the shippers to a respectable mercantile house in that port, which, on having possession of the bills of lading, was to have made a large advance to the shippers. Wise house alluded to, having received the bills of lading, did not think such security sufficient, and, as the packet was fortunately detained, went on board to examine the case. On opening it, to the astonishment ref all present, it was found to contain sugar instead of gold. It appeared to have been the intention of those engaged in this atrocious fraud, to lave sent one of their party as a passenger, for the purpose of watching an opportunity to destroy the seals on the case, which would have cleared themselves, and made it appear as if the robbery load taken place of board the packet, thereby throwing the whole loss on the commander.— -Falmouth Packet.

Inisn I:DEM—Hill Street, a suburb of Dundalk, on the Dublin side, was at an early hour on Friday morning the scene of a dreadful murder, the perpetrators of which have not been discovered. The victim was a poor fisherman, named James Phillips. His skull, face, muse, and jaws, were broken to atoms, and altogether exhibited a most appalling spec- tacle. A man named Felix Campbell and four others have been coin - rnitted on suspicion. nassacars IN Vistomin.—TheNew York papers of the 2nd Sep- tember contain the following narrative. '• Three white ruffians and four slaves, in Southampton county, Virginia, lately associated together, and laving committed several murders. took it into their heads to strengthen their party by inducing the blacks of the district to join them. The three white men and four slaves belonging to Mr. John Travers, near the Cross Keys, rose upon him about an hour befare daylight, and murdered lim and all his white family. They then proceeded to Mrs. Catherine 'Whitehead's, and murdered the whole of the white family, consisting of Seven persons. Mr. Williams, a near neighbour of Mrs. Whitehead, Learing their cries, ran over, and found Mrs. Whitehead butchered with an axe ; her son (a minister of the Gospel) with his head severed from his body, and a young lady lying dead in the fire-place of her chamber. 3Ir. Williams immediately returned to his own dwelling, when he was uet by one of his own negro boys, with the tidings that his wife and children had been murdered in his absence. After pressing ail the slaves, the murderers put to death the families of Mr. George Vaughan, 31r. Thomas Barrow, and many others, amounting in all to nearly seventy persons. The troops and the militia had several skirmishes with the savages, whom they shot down on the roads, and the carcasses of the dead strewed, according to the papers, the highways. At length the insurgents were completely hemmed in, and an engagement ensued, in which a hundred blacks were killed, and several taken prisoners. The remainder, about two hundred in number, escaped to the Dismal Swamp.'