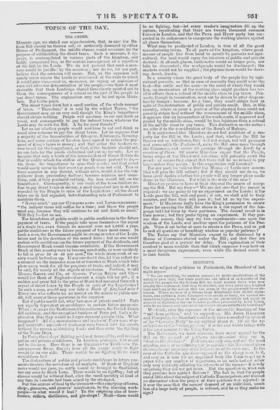 Moans ago, we stated our apprehension, that, in east the Re- form Bill should be thrown out, or materially damaged by either House of Parliament, the middle classes would associate fbr the purpose of withholding the direct taxes. Such a measure, it ap- pears, is contemplated in various parts of the kingdom, and boldly announced too, as the certain consequence of a rejection of the Bill by the Lords. We do not pretend that such a mea- sure would be justified by the occasion ; nor do we, for our part, believe that the occasion will occur. But, as the occasion will surely occur unless the Lords be convinced of the evils to which it would give rise,—and as, moreover, no saying or omission of ours will alter the determination of the people,—we think it most desirable that their Lordships should have clearly pointed out to them the consequences of a refusal on the part of the people to 'pay direct taxes. The explanation may not be lost upon Minis- ters. But to the point.

The direct taxes form but a small portion of the whole amount of taxes. " Therefore," it is said by the wildest Tories, " the Government may go on very well though the King's taxgatherer should obtain nothing. People will continue to eat and drink as usual, and consequently to pay the indirect taxes, whatever the lords may do with the Bill. A fig for your threats !"

Let us see whether people would continue to eat and drink as usual after refusing to pay the direct taxes. Let us suppose that a majority of the householders of Glasgow, Edinburgh, Birming- ham, and some portion of London, have agreed to refuse the pay- ment of King's taxes in money ; and that either the brokers re- fuse to act for the taxgatherer, or that, if the brokers should act, no one bids for the goods distrained and put up for sale. Let us imagine that only a tenth of the househo'ders of Great Britain do that in reality which the stiffest of the Quakers pretend to do,— viz. desire the taxgatherer to seize their g tads; and that (what -would surely occur'in that case) the goods were not sold. Two.or three seizures in any district, without sales, would deter the tax- gatherer from proceeding further; because seizures cost some- thing, and, if they produced nothing, the loss would fall on the taxgatherer. Consequently, if one tenth of the householders re- fuse to pay direct taxes in money, a most important law is de facto repealed by the People in spite of the Legislature : all the direct taxes are in fact repealed, notwithstanding acts of Parliament to maintain them.

"Never mind," say our CUMHERLANDS and LONDONDERRIES : "the indirect taxes will suffice for a time; and these the people must pay, because they will continue to eat and drink as usual." Will they ?—Let us see.

The foundation of public credit is public confidence in the future payment of taxes. if the people take upon themselves the repeal of a single tax, even though its amount were not 1,000/. a year, public confidence in the future payment of taxes must cease. In such a case, the Government might be strong in votes of the Legis- lature and in the devotion of the armed force ; but no one would reckon with confidence on the future payment of the dividends, and Government Stock would become unsaleable. If the Government Stock of this country were to become unsaleable, or were suddenly to fall in price 30 or 40 per cent! the whole framework of so- ciety would be broken up. If any one doubt this, let him reflect for a moment on the immense amount of transfers in Stock which take place every week for all the purposes of trade, and indeed, it may be said, for nearly all the objects of existence. Further, would Messrs. GROTE and Co., or Messrs. PAYNE SMITH and Co.— would the Bank of England—discount a single bill for 2o/., if a sudden and great fall in the price of Stock had occurred through a repeal of direct taxes by the People in spite of the Legislature ? In such a case, would any one take a Bank of England note 5' Every one who reflects for an instant on the nature of public cre- dit, will answer these questions in the negative. But if public credit fail, what becomes of private credit? Roth are equally dependent on confidence in certain future payments. '11.1.1iLlie the Tenth issued his ordinances, the French Funds fell suddenly, and the assembled bankers of Paris put forth a de- claration that they would no longer discount private bills.. What happened ? All the manufactures awl trades of Peris were stop- ped forthwith : myriads of workmen were turned into time streets without the means of obtaining food: and then came the fighting- of the Three Days.

In Paris, three days' fighting produced tranquillity, and revived public and private confidence. In London, probably, this would not be the case. Here there is no CuAeees the Tenth—no Po- LIGNAC-110 Swiss Guard; here all the people ready to fight would be on one side. There would be no fighting then: what would there be ?

The destruction of public and private confidence in future pay- ments involves the cessation of all markets. If Bank of England notes would not pass, no cattle would be brought to Smithfield, nor any corn to Mark Lane. There would be no fighting; but all classes would be without food, after the small quantity of food at any time in London had been seized by the strongest. But this seizure of food by the strongest—this emptying of barns, shops, granaries, and grocers' warehouses, by the starving work- people—to what would it lead ? To the emptying also of brew- _houses, cellars, distilleries, and gin-shops ! Next—there would

be no fighting, bid—let- every reader's imagination, fill up the picture, recollecting that there are twenty thousand. common thieves in London, and that the PEEL, and HUNT party has suc- ceeded in its endeavours to exasperate the working classes against all above themselves.

What may be predicated of London, is true of all the great manufacturing towns. To all parts of the kingdom, where great masses of people live from hand to mouth by pursuits not agri- cultural, the mail would carry the infection of public and private distrust : in all such places, bank-notes would no longer pass, nor

hills be discounted ; the workpeople would be discharged ; the markets would not be supplied ; the physical force would be starv- ing, drunk, frantic.

In a country where the great body of the people live by agri- cultural pursuits, so that in case of necessity they could seize the food—the cattle and the corn—in the midst of which they would

live, an insurrection of the working class might produce less ter- rible effects than a refusal of the middle class to pay taxes. Pea- sants, though in insurrection, need not be driven to utter despera- tion by hunger ; because, for a time, they could obtain food in

spite of the destruction of public and private credit. But, in this.

country, where so great a portion of the physical force could not possibly obtain food without the concurrence of the middle class,

it appears that an insurrection of the workpeople, if approved and guided by the middle class, would be less injurious than a refusal of the middle class. to pay taxes. This distinction merits notice : we oifer it to the consideration of the Bench of Bishops. It is understood that Ministers do not feel confident of a ma- jority for the Bill in the Lords ; and that, whether the Bill be thrown out or withdrawn, they will not resign, but will prorogue

and reassemble the Parliament, carry the Bill once more through the Commons, and secure its passage through the Lords. by a creation el Peers. Of course Ministers expect that the People, being aware of the Ministerial intention, will patiently await the result : of course they expect that there will be no refusal to pay taxes unless they resign. Is this expectation well founded?

For our part, we believe that the House cf Lords now assem- bled will pass the Bill unhurt ; but if they should not do so, we have great doubts whether the people will any longer place confi- dence in the Ministers. For what is the state of the case ?

Ministers profess to have at their disposal the means of carry- ing the Bill. But say they—" We are not sure that the means is

required: we are going to try an experiment on the Lords : if the Lords pass the Bill, well and good ; if not, we shall add to their number, and then they will pass it ; but let us try the experi- ment." If Ministers really have the King's permission to create Peers for carrying the Bill, the above is a fair report of the lan- guage held for them by their partisans. The desired result is in their power; but they prefer trying an experiment. If they pur- sue this course, they may try two experiments—one upon the• wisdom of the Lords, and another upon the patience of the Peo- ple. Were it not better at once to create a few Peers, and so put to rest all questions of hereditary wisdom or popular patience ?

The Tories say that Ministers expect to be dismissed by a House of Commons elected under the Bill ; and that they are therefore glad of a pretext for delay. This explanation of their. conduct is more credible than that which supposes toem bent on a most dangerous experiment, even while the desired result is ill their hands.