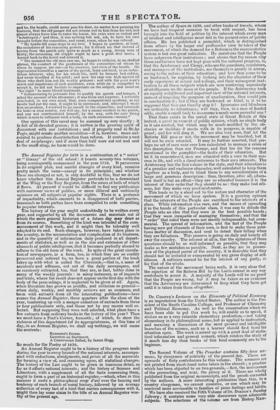 The Annual Register for 1830 is a continuation of a

" series" or " library" of the old school : it boasts seventy-two volumes, being consequently commenced in the year 1758. It perseveres in its original plan, and amidst changes of every kind, remains pretty much the same—except in its principles ; and whether these are changed or not, is only doubtful in this, that we do not know whether this Annual Register pretends to be a descendant of the Whig or the Tory Register, from the union of both of which it flows. At present it would be difficult to find any publication with narrower views of politics, or more illiberal and unfriendly opinions on all subjects of popular rights. There is a pretence of impartiality, which amounts to a disapproval of both parties, inasmuch as both parties have been compelled to cede something to popular interests.

The history of the year ought undoubtedly to be written every year, and supported by all the documents and materials out of which the more general historian of a future day may draw as from its source. Something of the kind was intended at the com- mencement of this work, and it might then be tolerably well adapted to its end. Such changes, however, have taken place in the country, in the accumulation and complication of its business, and in the quantity of information daily produced in all depart- ments of statistics, as well as in the rise and extension of other channels of public intelligence, that it becomes perfectly absurd to adhere to the old form of the work. In spite of the great circula- tion of newspapers, in a form, too, in which they are so readily preserved and referred to, we have a great portion of the book taken up with what is called the Chronicle,—that is, a mass of accidents and offences, cut out of the daily newspapers, and so carelessly extracted, too, that they are, in fact, better done in many of the weekly journals : in many instances, as of inquests and trials, where the result does not appear on the first day with the body of the proceedings, it is neglected to be given at all. Again, when literature has grown so prolific, and criticism so general— when daily, weekly, and monthly reviews are so common, and teem with extracts from all the interesting publications—here comes the Annual Register, three quarters after the close of the year, lumbering up with a meagre collection of extracts from three or four publications only, and those not by any means well se- lected. But supposing they were well selected, what place have a few extracts from ordinary books in the history of the year? Then we must have a Poet's Corner, forsooth ; of which, to show the richness of this department (of its appropriateness, at this time of day, in an Annual Register, we shall say-nothing), we will name the contents :

A Cameronian Ballad, by James Hogg. So much for the Poetry of 1830.

An Annual Register ought to be a history of the progress made during the year in every branch of the national interests, accompa- nied with' reductions, abridgments, and précis of all the materials for forming a view of, and reasoning upon-, all statistical changes. The history of the Law ought to be given in luminous detail, as far as it affects national interests ; and the history of Science and Literature, with a supplement of .all the facts concerning them, ought to form a part of an historical register,—which, when in this manner it casts a philosophical coup d'cleil over the bearing and tendency of each branch of social history, followed by an average Collection of every fact of a kind that carries consequences with it, might then lay some claim to the title of an Annual Register wor- thy of the present age.