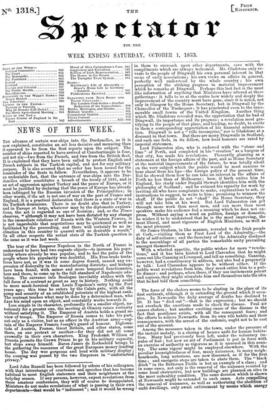 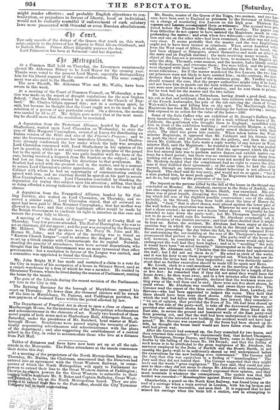 The force of the cholera seems to be abating in

the place of its first outbreak, although it is extending the ground which it occu- pies. In Newcastle the daily average of deaths has declined to 20. It has "died out "—that is the expression ; but we should not overlook the exertions made to check the disease. Foul air causes cholera ; but another exciting cause of the disease is the fact that pestilence exists, with all the consequent fears ; and the efforts to relieve Newcastle from its own vile habits and their consequences, with the arrest of the endemic, ought not to be cast out of the account.

Among the measures taken in the town, under the pressure of the instant malady, is a closing of houses unfit for human habita- tion. Many had previously been left, under the voluntary im- pulse of fear ; but now an act of Parliament is put in force with an exercise of authority as vigorous as it is unusual in this coun- try. The same vigour might be employed elsewhere. With the peculiar keensightedness of fear, many nuisances, in many neigh- bourhoods, long notorious, are now discerned, as if for the first time ; and energetic steps are taken to abate them. The "black ditch" in the Battersea Fields is but an example of a class ; and in some eases, not only is the removal of the nuisance resisted by some local obstructive, but new buildings are planned on sites in the most unhealthy condition. The same decision which is shown at Newcastle might be extended to such cases. Lots compelling the removal of nuisances, as well as authorizing the abolition of unfit dwellings, only await enforcement by means which energy

might render effective ; and probably English objections to cen- tralization, or prejudices in favour of liberty, local or individual, would not be violently resentful if enforcement of Buell salutary laws were prosecuted with Oriental or even Russian absoluteness.