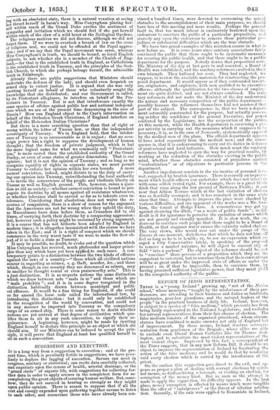 IT is a long way from a suggestion to execution ; and at the pre- sent time, which is peculiarly fertile in suggestions, we have pecu- liarly to deplore the lagging of execution. Savans can meet in congress, sanitary or statistical; can recite data carefully collected, and expatiate upon the census of health, arterial drainage, or the "grand circle" of organic life, with suggestions for collecting fur- ther data in order to apply science in the oompletest form for ac- complishing the great objects of securing human welfare. But, some- how, they do not succeed in bearing so strongly as they might upon public opinion. There is reason to suppose that if all the cost and energy ectpended upon gathering together sevens to listen to each other, and reconvince those who have already been con-

vineed a hundred times, were devoted to overcoming the actual obstacles to the accomplishment of their main purposes, we should have less of this meeting and more results. Perhaps the general fault is, that too much labour is exclusively bestowed upon the endeavour to convince the public of a particular proposition, mid scarcely any upon the endeavour to remove those particular pre- judices or substantial difficulties which are the true obstacle.

We have two grand examples of this mistaken course in what is now before us. It is some years since sanitary associations fairly convinced the public that there ought to be systematic measures for securing the public health, and that there ought to be a public department for the purpose. Nobody denies that proposition now. The Ministry of the day at last gave in and assented ; a Board of Heath was established, and the sanitary reformers exulted in their own triumph. They hallooed too soon. They had neglected, we suppose, to review the available materials for constructing the pro- posed department. It would appear as if they confounded invent- ors, originators, and explorers, with men qualified to be executive officers; although the qualification for the two classes of employ- ment are quite distinct, and are not always combined. The sani- tary reformers did not make the Minister of the day understand the nature and necessary composition of the public department— possibly because the reformers themselves had not mastered that part of the subject. The consequence is, that we have a depart- ment ostensibly constructed for the purpose, but actually possess- ing neither the confidence of the general Executive, nor power conferred by the Legislature, nor the cooperation of the public. At this moment while the llealth department is exercising a pro- per activity in carrying out the measures which it supposes to he necessary, it is, as in the ease of Newcastle, systematically opposed by the medical men of the place. The official department appears to have acted separately from the medical men ; and the conse- quence is, that it is endeavouring to carry out its duties in defiance of professional and local influence. How much must the sanitary reformers have neglected to open the way for practical results, by working at the reduction of the obstacles existing in the public mind, whether those obstacles consisted of prejudices against "centralization" or of objections to particular persons in the department. Another impediment consists in the via inertke of personal inte- rest, supported by brutish ignorance. There is scarcely an improve- ment which health.officers can undertake which does not inter!"ere with some selfish vested right. For example, there is a great black ditch that runs along the low ground of Battersea Fields ; it ran near that Albion Terrace which at the last visitation of cholera was so fearfully scourged ; and it has remained in the same state since that time. Attempts to improve the place were checked by ' various difficulties, and one opponent of the works was a Mr. Gra- ham, the tenant of Hedge Farm. A remonstrance was got up against cleansing the ditch, "as a waste of public funds" ; so dif- ficult is it for ignorance to perceive the operation of causes which are not grossly and visually manifest. It is slow work, the en- deavour to convince such people that there ought to be a Board of Health, or that stagnant water causes the calamity called cholera. The very clown, who would roar out under the pangs of the disease at one moment, disbelieves that which he does not him elf feel so long as he is in health ; or, to use an expression which es- caped a City Conservative lately, in speaking of the proposal to remove a market nuisance, he will object to convert city or field "into a parlour." The object of the reformer should be, not to "convince" those persons ot a proposition which they are in- competent to entertain, but to convince them that their convenience will be as great under the improved state of affairs as under the present ; or, if that be impossible, then to convince them, by having procured sufficient legislative power, that they must yield to the recognized authority of the public.