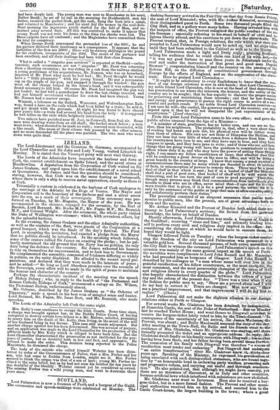 The Lord-Lieutenant and the Countess St. Germans, accompanied by the Lord Chancellor and Sir John and Lady Young, visited Limerick on Monday. It is stated that the Viceregal party will next visit Galway.

The Lords of the Admiralty have inspected the harbour and forts at Cork, the convict establishment on Spike Island, and -the naval stores at Haulbowline. A deputation from the Corporation of Cork waited on Sir James Graham, and urged upon him the establishment of a naval school at Queenstown. Sir James said that the question should be considered ; stating, however, that Cork was on the same footing as Portsmouth, where there is only a ship to receive naval apprentices, exactly as there is at Cork.

Triennially a custom is celebrated in the harbour of Cork analogous to the marriage of the Adriatic by the Doge of Venice. The Mayor and Corporation sail to the boundary of the harbour and cast a silver arrow into the sea, as a mark of their sovereignty. This ceremony was per- formed on Tuesday, by Mr. Maguire the Mayor of the year. He was accompanied in the steamer, engaged for the occasion, by the Earl of Bandon, Lord Bernard, Mr. Roche M.P., Mr. Fagan M.P., Mr. Beamish M.P., and Colonel Wright After the ceremony, the whole party visited the Duke of Wellington war-steamer ; which, with seventeen others, lay in the splendid harbour.

In the evening, Sir James Graham and the other Admiralty authorities, as well as the captains of the fleet, were guests of the Corporation at a grand banquet, which was the finale of the day's festival. The First Lord, in accepting the invitation, had exacted a pledge from the Mayor that no politics should be introduced, In the speaking which followed, some of the orators rallied Sir James on exacting the pledge ; but he gal- lantly maintained the old ground that the Navy has no politics, its only duty being the defence of the country. Sir James exhorted his hearers to rely on themselves for improvements, and to look less to Government. He complimented the assembly, composed of Irishmen differing so widely in polities, on the unity displayed. He alluded to the recent naval pre- parations, and declared that they were made in the interests of peace ; and he added—" So long as Lord Aberdeen presides over the councils of the Sovereign, every effort will be made in the spirit of peace to maintain the honour and character of the country." Perhaps the characteristic incident of the meeting was the speech of Bishop Delany who, in reply to the health of "the Protestant and Roman Catholic Bishops of Cork,' pronounced a eulogy on Dr. Wilson, the Protestant Bishop, unfortunately absent. Mr. Osborne, described by Sir James Grahatn as "the Osborne of Tipperary," made a speech in his best vein of mingled sense and banter. Lord Bernard, Mr. Fagan, Mr. Isaac Butt, and Mr. Beamish, also made speeches.

The Lords of the Admiralty left Cork the same night.

Mrs. Kelly's case continues to occupy the Irish Courts. Some time since, a charge was brought against her, in the Dublin Police Court, of having conspired to destroy certain love-letters to a Mr. Malone, solicitor' promising to marry him on the death of Mr. Kelly, then living, in the event of the will of her husband being in her favour. This case still stands adjourned. But another charge against her has been determined. She was accused of perjury, and an application was made to the Lord Chancellor for the production of the affidavit made by Mrs. Kelly which is alleged to have been false. But the Lord Chancellor characterized the prosecution as not instituted for the pur- poses of justice, but as doubtful both in law and fact, and oppressive. He refused • to make the order. This decision being reported to the Police Magistrate, he dismissed the charge.

The body of the suicide who called himself Webster has been disin- terred by order of the Commissioners of Police, that a Mrs. Forbes and her son, who had come to Dublin from London, might see it. Mrs. Forbes seemed to think the corpse was that of a son of hers ; young Mr. Forbes in- clined to the same belief, but as he had not seen his brother for ten years he was doubtful of the identity : Webster cannot yet be considered as owned. The missing Forbes was a wild young man, and went to Australia three years since.