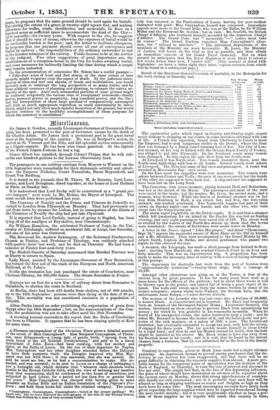 Page 7, 1 October 1853 — Contrary to expectation, prices at Mark Lane made but a
Close

slight advance yesterday. An impression seemed to prevail among purchasers that the de- ficiency in our harvest has been exaggerated, and that there will be no great difficulty in obtaining the requisite supplies from abroad. Amore pro- bable reason for the temporary pause of speculation was the decision of the Bank of England, on Thursday, to raise the rate of interest and discount to five per cent. The simple fact that, in the face of this depressing influence, the price of wheat should have maintained an advance of 2s. a quarter above the current rates on Monday, shows that strong apprehensions of consider- able dearth are still entertained ; nor is it probable that such fears will be allayed so long as shipping continues so scarce and freights so high as they have been for some time. The most encouraging accounts have lately been given regarding the large supplies which may be expected from abroad during the next twelve months ; but it is very questionable whether as large a por- tion of those supplies as we require Will reach this country in time, unless prices rise higher than they have yet done, Some of our con- temporaries speak of the danger of our importing too much grain, owing to exag erated notions of scarcity ; but, great as that evil might be, the importing too little, in consequence of our wants being under- estimated, would be a much greater calaniity, and might even cause more injury to trade. As to striking the juste milieu in our im- ports of grain, that would be difficult under any circumstances, and, with our shameful want of food statistics, is utterly impossible. The only accu- rate iriformation we have on the subject, is with regard to our consumption of foreign wheat and flour; which appears to have been going on at a very rapid rate before our own harvest was gathered, and which may be expected to proceed still more rapidly now that our own supplies threaten to be so very deficient. During the first eight months of the present year, we im- ported 3,304,025 quarters of foreign wheat, and 3,337,206 hundredweight of foreign flour ; and yet we are told that "the stocks in granary are by no means excessive."