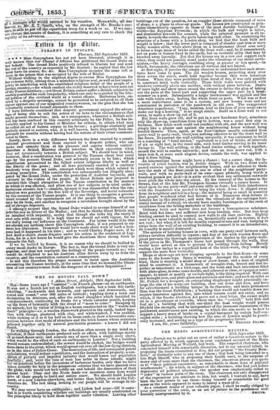 naMitteiCimynghani has not yet been liberated, although it is

IdneitPtlideaitir- Charge d'Affaires has petitioned the Grand Duke on her-behalf.- The:fir:and Duke positively refused to liberate her and send ter outeft.he coUntry as. requested by Mr. Scarlett : he replied that the law mast baveita course, &e. &e. Miss Cunyngham occupies the same cell or -rem in the prison that was occupied by the wife of Madiai. .-Vithout wishing in the slightest degree to excuse Miss Cunyngham for iterextrerne folly, arising from a mistaken religious zeal, as well as her impro- priety in interfering with the established religious belief of the people of a „foreign country,—for which conduct she richly deserved to have been sent out efthe Taman territory,—yet Great Britain cannot suffer a British subject to be ra,,14 punished for such irregularity, which can only be regarded by the libe- ral portion of the civilized world as a venial offence. Barbarous laws, en- acted bye despotic sovereign, cannot be permitted to be enforced in all their .rigour against one- of our misguided countrywomen, on the plea that she has voluntarily rendered herself amenable to them. I have hitherto considered that despotic government enjoyed the advan- tage of being able to suit the action of its laws to the circumstances that might present themselves; and, as a consequence' whenever a British sub- Jett has been confined in this country arbitrarily by the Police, he has in- variably applied to his Consul or Minister for redress, to obtain what may be called an act of habeas corpus in his favour ; a privilege absolutely and entirely denied to natives, wh_ ,o it is well known, have frequently been im- prisoned for months without having had the nature of their crime communi- cated to-them.

Surely, there is a wide difference between the laws enacted by a consti- tutional government and those enacted by a despotic prince, who can make and unmake them at his pleasure and caprice without control: therefore a British Minister should interfere in their execution when they act tyrannically towards a British subject. We should bear in mind, however' -that a constitution was granted to the Tuscans about four years ago by the present Grand Duke, and solemnly sworn to by him; which .constitution guaranteed in the fullest extent religious liberty as well as .the liberty, of. the . prose ; and all laws previously enacted of a contrary .Iteedeney were then set aside, amongst which were those which related to Making :proselytes. This constitution was subsequently but illegally abro-

,gated Grind Duke, • under the protection of Austrian bayonets, and colitrary 'to : the wishes of the people. Is Great Britain now prepared to .sautionithisillegal abrogation of the Tuscan constitution in the manner .imerhiqhilt.vtaireffeeted, and allow one of her subjects to be tried under a Abarbarona obsolete ,law ?—obsolete, because it was disannulled when the con- .stitution:Was greeted, by the free will of the Sovereign, and never reinacted .hythe:Consentef the Tuscan people. It is one thing to recognize a govern- 'iniinVereated by the ,spontancous act of the people themselves, whatever lylieits form, and another to recognize a revolution brought about by the Addrofifisrage bayonets. sitat ngly suspect that the Grand Duke wished to avenge himself of our -literfertnee in favour of the Medial ; and that he thinks Great Britain may be insulted.with impunity, seeing that though she talks big she rarely if ,ever acts with energy. It is high time we should act with vigour, for we , ariadally losing our influence on the Continent. Far better would it be that Artishoultaay nothing about this Cunyngham affair, if not prepared to en- , forte her. liberation. Cromwell would have made short work of such a busi- nees.batlit happened in his time ; and so would Charley Napier now, if he • liadinilfr.a-dozen steam-frigates under his orders in the roadstead at Leg- .laotts,_forin a few hours he would give the Austrians there strong hints to ,eearmate:the fort. If we be bullied by Russia, it is no reason why we should be bullied by ererysmall duchy, in Europe. The fact is, that the Grand Duke is very un- - poptiksz,.sind-does not represent the feelings of the people towards us ; who :.avnitIchlie4delighted to see his Austrian allies driven away by us from the einustry,,and the constitution restored as a consequence.

.1s;lisot this therefore the proper moment to insist upon the Austrians evaestating the Tuscan territory, at the same time that we demand the libem- Lien prow countrywoman from the dungeons of a modern Inquisition ? lo j, • a....