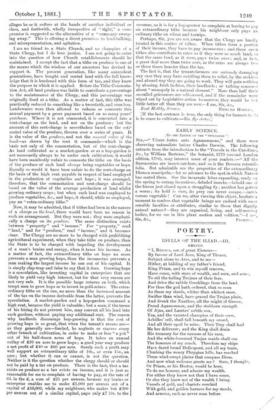 [To THE EDITOR OF THE "SPECTATOR."' SIR,—" Vixere fortes ante Agamemnona," and there were observing naturalists before Charles Darwin. The following extracts from the introduction to the "Travels in the Carolinas, &c., by William Bartram," the botanist, 1773 (second London edition, 1794), may interest some of your readers :—" All the Sarracenias are insect-catchers, and so is the Drosera rotundi- folia. But admirable are the properties of the extraordinary Dion= muscipula,—let us advance to the spot in which Nature has seated them. See the incarnate lobes expanding, ready on the spring to entrap incautious, deluded insects,—behold one of the leaves just closed upon u struggling fly ; another has gotten a worm ; its hold is sure, its prey can never escape,—carni- vorous vegetable ! Can we, after viewing this object, hesitate a moment to confess that vegetable beings are endued with some sensible faculties or. attributes, similar to those that dignify animal nature ?—they are organical, living, and self-moving bodies, for we see in this plant motion and volition."—I am,