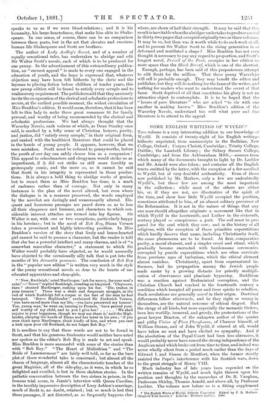 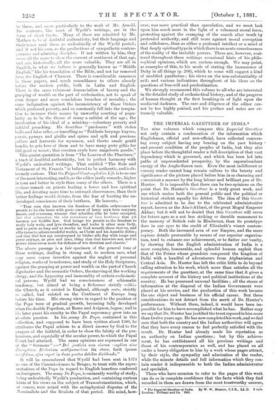 SOME ENGLISH WRITINGS OF WYCLIF.*

Tins volume is a very interesting addition to our knowledge of Wyclif. It consists of twenty-eight of his English writings hitherto unprinted, from manuscripts in the Bodleian, New College, Oxford ; Corpus Christi, Cambridge ; Trinity College, Dublin ; the Lambeth Library ; the Sidney Sussex College, Cambridge ; and from the Ashburnham MSS.,—sources from which many of the documents brought to light by Dr. Lechler and Mr. Arnold were also taken ; and contains all the English tracts omitted by the latter, with the exception of a few ascribed to Wyclif, but of very doubtful authenticity. Even of those now published by Mr. Mathew, only a few are undoubtedly Wyclif's, but those few are among the most important in the collection ; while most of the others are either his, or, if they are not, are illustrative of the spirit of the time, and show how little Wyclif occupied the position, sometimes attributed to him, of an almost solitary precursor of the Reformation. It is not in the nature of things that any one man should altogether originate a movement like that in which Wyclif in the fourteenth, awl Luther in the sixteenth, century played so conspicuous a part. The soil must be pre- pared for the seed which they sow; and in the history of all religions, with the exception of those primitive superstitious which hardly deserve that name, including Christianity itself, the same phenomena are to be found. At first, comparative purity, a moral element, and a simpler creed and ritual, which gradually become encrusted with burdensome ceremonies corrupted by puerile superstitions which are often survivals from previous ages of barbarism, which the ethical element almost vanishes. Christianity, apart from supernatural in- fluences, had its propagation among the Jewish people made easier by a growing distaste for priestly multipli- cation of observances and pharisaic hypocrisy. Buddhism was a reaction against Brahminical corruption, and the Christian Church had reached in the fourteenth century a condition which tempted all purer and freer spirits to rebellion. Such revolutions are generally moral in their origin. Doctrinal differences follow afterwards, and be they right or wrong in themselves, are the natural outcome of ethical disgust. Had the clergy of all kinds, but more especially the monastic Orders, been less worldly, immoral, and greedy, the protestations of the great lawyer Bracton, of the uukn.own author of the quaint and pithy Vision of Piers Ploughman, of Chaucer himself, of William Occam, and of John Wydif, if uttered at all, would have taken no root and have elicited no sympathy. And if the absolutism of the Papal Court had been less obtrusive, it would probably never have roused the strong independence of the Anglican mind which broke out from time to time, and indeed was never wholly silent from a period much earlier than the days of Edward I. and Simon de Montfort, when the former stoutly resisted the Pope's interference with his Scottish wars, down to the great struggle of Henry VIII.

Much industry has of late years been expended ou the written remains of Wyclif, and much light thrown upon his position and thoughts by the researches of Dr. R. Vaughan, Professors Shirley, Thomas Arnold, and above all, by Professor Lechler. The volume now before us is a fitting supplement

to these, and more particularly to the work of Mr. Arnold. Its contents, like most of Wyelif's writings, are in the form of short tracts. Many of these are admitted by Mr. Mathew to lie of doubtful authenticity, but their language and their tenor rank them as undoubtedly of the Wyclif period ; and if not his own, as the productions of sympathetic contem- poraries and admiring disciples. If not written by him, they serve all the more to show the current of sentiment of that age, and are, historically, all the more valuable. They are all in English, in what we believe is generally known as "Middle English," like his translation of the Bible, and not far removed Irons the English of Chaucer. There is considerable sameness in these papers, and much resemblance to others already before the modern public, both in Latin and English.

There is the same vehement denunciation of luxury and the grasping of wealth on the part of ecclesiastics, not to speak of even deeper and more scandalous breaches of morality ; the same indignation against the inconsistency of those Orders which professed poverty, and so constantly fell into the tempta- tion to increase their means by unworthy courting of popu- larity as to be the theme of many a satirist of the age ; the inculcation of his ideal of a ministry—voluntary poverty and faithful preaching. He describes " pardoners " with stolen bulls and false relics, or travelling as "Pedderis berynge linyves, pursis, pynnys and girdlis and spices and sylk and precious pellure and forrovris for wymmen, and therto smale gentil hondis, to gete love of them and to have many grete giftis for litil good or nonzt ; thei coveiten evyle here naigeboris goodis." This quaint quotation is from "The Leaven of the Pharisees."

a tract of doubtful authenticity, but in perfect harmony with Wyclif's undoubted writings. That entitled "The Rule and Testament of St. Francis "is believed to be authentic, and is ex- tremely curious. That On Feigned Contemplative Life is to us one of the most interesting, and is, as the editor justly remarks, higher in tone and better in style than many of the others. There is a curious remark on priests leading a lower and less spiritual life, and devoting more time to outward observances, than their better feelings would dictate, from the fear of hurting the un- developed consciences of their brethren. He laments,—

" That men that knowen the freedom of Goddis ordynaunce for prestis to be the baste with grete sorow of herte seyn here matynes, masse, and evensong, whanne thei schulden ellis be betre occupied, last ihei sclaundren the sike conscience of here bretheren that yit knowen not Goddis law. God bringe his prestis to the freedom to study holy writt, and lyve therafter, and teche it other men frely, and to preie as long and as moche as God meneth them ther-to, and ellis tome to othere needefal werkis, as Christ and his Apostlis diden ; and that awi ben not constreyned to blabre elle day with tonge and grete criynge, as pies and iaies, thing that thei knowien not, and to - peierc there owen soule for defante of wis devotion and charite."

The above passage is a fair specimen of the general tone of these writings, dealing in strong and, to modern ears, what may seem coarse invective against the neglect of personal religion, works of beneficence, and study of the Holy Scriptures, against the grasping at power and wealth on the part of Church dignitaries and the monastic Orders, the starving of.the working clergy, and the hypocrisy and immorality of certain ecclesiasti- cal persons. Wyclif had no consciousness of schismatic tendency, but aimed at being a Reformer strictly within, the Church, as it existed in England, although sects, strictly so called, had existed on the Continent of Europe long before his time. His strong views in regard to the position of the Pope were of gradual growth, becoming fully developed when the double Popedom, at Rome and Avignon, began ; and in his later years his enmity to the Papal supremacy grew into an absolute passion. In his .essay De Papa, contained in this collection, and supposed to have been written about 1380, he attributes the Papal schism to a direct answer by God to the prayers of the faithful, in order to show the falsity of the pre- tensions, and especially of the secular power, to which the Papal Court had attained. The same opinions are expressed in one of the " Sermons " :—" Dei justicia non, sinens ::mplius sine disrupt ione Ecclesiam malignancium ita stare, facit ipsam evict/0/am, ejus caput in duas partes debiles divide-ado."

It will be remembered that Wyclif had been sent in 1374 as one of the Commissioners to Bruges, to treat with the repre- sentatives of the Pope in regard to English benefices conferred on foreigners. The essay De Papa, is eminently worthy of study, being undoubtedly Wyclif's production, and containing curious hints of his views on the subject of Transubstantiation, which, of course, were mixed with the metaphysical disputes of the Nominalists and the Realists of that period. His mind, how- ever, was more practical than speculative, and we must look upon him much more in the light of a vehement moral force, protesting against the cramping of the search after truth by pretended authority, and still more against moral corruption and selfishness, than as either a profound intellect or a mind of that deeply spiritual type in which there is an acute consciousness of the reality of the invisible powers. There are, however, scat- tered throughout these writings occasional hints of his philo- sophical opinions, which are, curious enough. We may point, as examples of this, to his mode of stating the immanence of Deity in all things (p. 208), which to some will suggest a kind of modified pantheism ; his views on the non-substantiality of evil; and various indications throughout of his ideas on the questions of free-will and predestination.

We strongly recommend this volume to all who are interested in the detailed study of ecclesiastical history, and of the progress of human thought at the first breaking-in of light upon the mediaaval darkness. The care and diligence of the editor can be too highly praised, and his preface and notes are ex- tremely valuable.