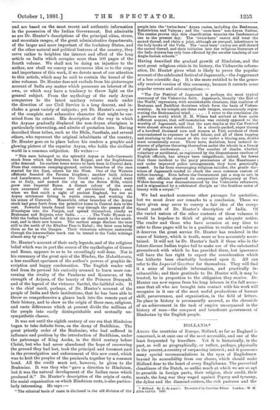 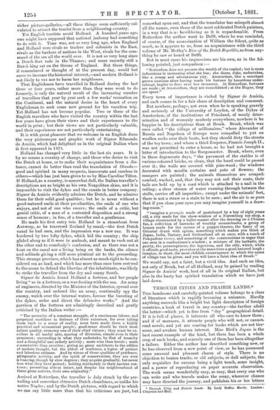 AMONG the countries of Europe, Holland, as far as England is concerned, is at once one of the most accessible, and one of the least frequented by travellers. Yet it is historically, in the past, as well as geographically, or rather, perhaps, physically in the present, a country of surpassing interest ; and it possesses many special recommendations in the eyes of Englishmen beyond its accessibility from our shores, which should make Holland dear to the heart of every Englishman. The proverbial cleanliness of the Dutch, so unlike much at which we are so apt to grumble in foreign parts, their religion, their credit, their morals, the long war they waged against Popery and tyranny, the dykes and the diamond-cutters, the rich pastures and the Holland. By E. de Imies. Translated by Caroline Tilton. London; W. H. Allen and Co. 1880.

richer picture-galleries,—all these things seem sufficiently cal- culated to attract the tourist from a neighbouring country.

Yet English tourists avoid Holland. A hundred years ago, one might have supposed that national jealousy had something to do with it. Time was, not so very long ago, when England and Holland were rivals as traders and colonists in the East, rivals as the bankers of nations in the West, rivals for the com- mand of the sea all the world over. It is not so very long since

a Dutch fleet rode in the Thames ; and more recently still a Dutch king sat on the throne of England. But these things,

if remembered or thought of at the present day, would but serve to increase the historical interest,—and modern Holland is not likely to vex nor to harm her neighbours.

That Englishmen have travelled in Holland during the last three or four years, rather more than they were wont to do formerly, is only the natural result of the increasing number of travellers that year by year seek a few weeks' recreation on the Continent, and the natural desire in the heart of every Englishman to seek some new ground for his vacation trip. Yet Holland has not become popular. Two or three of the English travellers who have visited the country within the last few years have given their views and their experiences to the world in print ; but their views are not particularly valuable, and their experiences are not particularly entertaining.

It is with great pleasure that we welcome in an English dress the very picturesque and graphic work of Signor Edmondo de Amicis, which had delighted us in the original Italian when it first appeared in 1874.

Holland has changed very little in the last six years. It is by no means a country of change, and those who desire to visit the Dutch at home, or to make their acquaintance from a dis- tance, cannot do better than read the translation of Olanda- good and spirited, in many respects, inaccurate and careless in others—which has just been given to us by Miss Caroline Tilton. If Holland, as a country, is somewhat dull, the Italian traveller's descriptions are as bright as his own Neapolitan skies, and it is impossible to visit the dykes and the canals in better company. Signor de Amicis evidently admires the Dutch, and he admires them for their solid good qualities ; but he is never without a good-natured smile at their peculiarities, the smile of one who enjoys, and, not of one who sneers ; the smile of a critic, but genial critic, of a man of a contented disposition and a strong sense of humour ; in fine, of a traveller and a gentleman.

He made his first entry into Holland in a steamboat from Antwerp, as he traversed Zealand by canal,—the first Dutch canal he had seen, and the impression was a new one. It was bordered by two lofty dykes, which hid the country ; the ship glided along as if it were in ambush, and meant to rush out at the other end to somebody's confusion, and as there was not a boat on the canal nor a living being on the banks, the silence and solitude giving a still more piratical air to the proceeding. 'This strange province, which has almost as much right to be con- sidered sea as land, and which has more than once been restored to the ocean to defend the liberties of the inhabitants, was likely to strike the traveller from the dry and sunny South.

Signor de Amicis found Holland a fortress, and her people living "as in a fortress, on a war-footing with the sea. An army .of engineers, directed by the Minister of the Interior, spread over the country, and ordered like an army, continually spy the enemy, watch over the internal waters, foresee the bursting of the dykes, order and direct the defensive works." And the garrison of the fortress are admiringly described and gently criticised by the Italian writer :—

" The necessity of a constant struggle, of a continuous labour, and perpetual sacrifices in defence of their existence, for ever taking them back to a sense of reality, must have made them a highly practical and economical people; good-sense should be their most salient quality, economy one of their chief virtues ; they must be ex- cellent in all useful arts, sparing of diversion, simple even in their greatness ; succeeding in what they undertake, by dint of tenacity and a thoughtful and orderly activity; more wise than heroic ; more conservative than creative ; giving no great architects to the edifice of modern thought, but the ablest of workmen, a legion of patient and laborious artisans. And by virtue of these qualities of prudence, phlegmatic activity, and the spirit of conservatism they are ever alvancing, though by slow degrees ; they acquire gradually, but never lose what they have gained ; holding stubbornly to their ancient cus- toms ; preserving almost intact, and despite the neighbourhood of three great nations, their own originality."

Arrived at Rotterdam, the traveller is duly struck by the pre- vailing and somewhat obtrusive Dutch cleanliness, so unlike his native Naples ; and by the Dutch pictures, with regard to which we can say little more than that his criticisms are just, but somewhat spun out, and that the translator has misspelt almost

all the names, even those of the most celebrated Dutch painters, in a way that is ai bewildering as it is unpardonable. From Rotterdam the author went to Delft, where he was reminded, of course, of the assassination of William the Silent, quite as much, as it appears to us, from an acquaintance with the third volume of Mr. Motley's Rise of the Dutch Republic, as from any- thing he saw or heard at Delft.

But in most cases his impressions are his own, as in the fol- lowing pointed, just comparison :—

"Rotterdam does not possess the wealth of the capital; but is more industrious in increasing what she has; she dares, risks, undertakes, like a young and adventurous city. Amsterdam, like a merchant grown cautious after having made his fortune by hazardous under- takings, begins to doze over her treasures. At Rotterdam, fortunes are made ; at Amsterdam, they are consolidated ; at the Hague, they are spent."

Every town of importance is visited by Signor de Amicis, and each comes in for a fair share of description and comment.

But nowhere, perhaps, not even when he is speaking gravely and seriously of the University of Leyden, of the Dykes of Amsterdam, of the institutions of Friesland, of manly deter- mination and of womanly modesty everywhere, nowhere is he happier in his descriptions than at Brock. Broek, which was once called "the village of millionaires," where Alexander of Russia and Napoleon of Europe were compelled to put on woollen socks over their boots, lest they should dirty the streets of the toy town ; and where a third Emperor, Francis Joseph II., was not permitted to enter a house, as he had not brought a letter of introduction to the Burgomaster. Broek, where, even in these degenerate days, "the pavement of the stables is of various-coloured bricks, so clean, that the hand could be passed over it ; the walls are covered with pine-wood ; the windows decorated with muslin curtains and pots of flowers; the mangers are painted ; the animals themselves are scraped, combed, washed, and, that they may not soil their coats, their tails are held up by a cord which is attached to a nail in the ceiling ; a clear stream of water running through between the stalls, carries off all impurities ; except under the animals' feet, there is not a straw or a stain to be seen ; and the air is so pure that if you close your eyes you may imagine yourself in a draw- ing-room."

"Imagine a presepio made of pasteboard by a boy of eight years old, a city made for the show-window of a Nuremburg toy-shop, a village constructed by a ballet-master after the drawing on a Chinese fan, a collection of barracks of wealthy mountebanks, a group of houses made for the scenes of a puppet-theatre, the fancy of an Oriental drunk with opium, something which makes you think of Japan, India, Tartary, and Switzerland all at once, with a touch of Pompadour rococo, and something of the constructions in sugar that one sees in a confectioner's window ; a mixture of the barbaric, the pretty, the presumptuous, the ingenious, and the silly, which, while it offends good-taste, provokes at tho same time a good-natured laugh ; imagine, in short, the most childish extravagance to which the name of village can be given, and you will have a faint idea of Broek."

We would say, not a faint, but a vivid idea. And such an idea, not only of Broek, but of all Holland, may be gained by reading Signor de Amicis' work, best of all in its original Italian, but also in the hasty but spirited translation which we have just laid down.