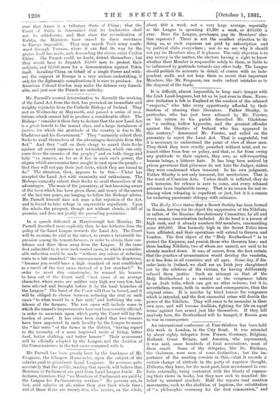 Page 2, 1 October 1881 — Mr. Parnell's avowed determination to discredit the working of the
Close

Mr. Parnell's avowed determination to discredit the working of the

Land Act from the first, has provoked an immediate and weighty rejoinder from the Catholic Bishops of Ireland. They met on Wednesday at Maynooth, and passed a series of reso- lutions which cannot fail to produce a considerable effect. The Bishops "consider it their duty to declare that the new Land Act is a great benefit to the tenant class, and a large instalment of justice, for which the gratitude of the country is due to Mr. Gladstone and his Government." They "earnestly exhort their flocks to avail themselves of the advantages derivable from this Act." And they "call on their clergy to guard their flocks against all secret agencies and intimidations, which can only come from the enemies of the people ;" and on both clergy and laity "to remove, as far as it lies in each one's power, the stigma which our enemies have sought to cast upon the people,— that they will not pay their just debts, which they are bound to do." The situation, then, appears to be this :—Ulster has accepted the Land Act with unanimity and enthusiasm. The Bishops earnestly exhort their flocks to avail themselves of its advantages. The mass of the peasantry, at last becoming aware of the boon which has been given them, and weary of the unrest of the last two years, are longing to follow the Bishops' advice. Mr. Parnell himself dare not urge a flat rejection of the Act, and is forced to take refuge in supersubtle expedients. Upon the whole, the prospect, though not without clouds, is full of promise, and does not justify the prevailing pessimism.