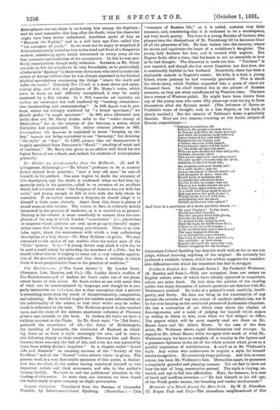 Marston, and Co.)—Mr. Leader Scott's studies of Fra Bartolommeo and of Andrea del Sarto make one of the pleas- antest books of this series. Mr. Scott writes as one with some idea of what can be communicated by language, and though he is pro- perly instructive on technique, has a clear conception that a picture is something more than the result of draughtsmanship, composition, and colouring. He is careful to give his readers some information on the individuality of the artists, so that their works may be under- stood in reference to the men. The Medicean period is also touched upon, and the story of the intense, passionate reformer of Florence gives a rare interest to the book. In Andrea del Sarto we have a striking contrast to the Frate. As Mr. Scott says, "he [Del Sarto] gathered the experience of all,—the force of Michelangelo, the handling of Leonardo, the sentiment of Raphael, so blend- ing them as to form a style seemingly his own, and in execu- tion following closely on their excellence. Between him and Barto- lommeo there was only the link of Art, and even Art was pursued by them from widely distinct impulses." In a chapter called "Social Life and Manners" an amusing account of the "Society of the Cauldron" and of the "Trowel"—two artistic clubs—is given. The present work is a very favourable specimen of this series, a distinc- tion due, we think, to the author having restricted himself to two important artists and their successors, and also to the author's literary facility. We have to call the publishers' attention to the binding of this series. In more than one instance, we have found the leaves ready to part company on slight provocation.