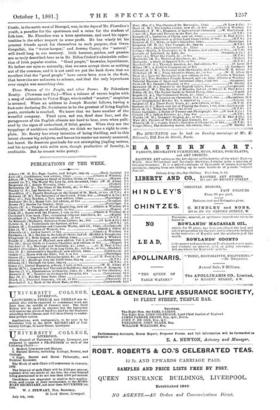 Three Women of the People, and other Poems. By Pakenham

Beatty. (Newman and Co.)—When a volume of verses begins with a song of salutation to Victor Hugo, who is called "master," suspicion is aroused. When an address to Joseph Mazzini follows, having a foot-note declaring Mr. Swinburne to be the greatest of living English poets, certitude is reached. We know that we have another of the weariful company. Tired eyes, sad ear, dead dear face, and dis- paragement of the English climate are hard to bear, even when palli- ated by the signs of undoubted, if fitful, genius. When they are the trappings of ambitious mediocrity, we think we have a right to com- plain. Mr. Beatty has every intention of being thrilling, and to this intent chooses big subjects, and leaves his reader not merely unmoved, but bored. He deserves gratitude for not attempting jingling metres, and his sympathy with noble men, though productive of ferocity, is creditable. But he cannot write poetry.