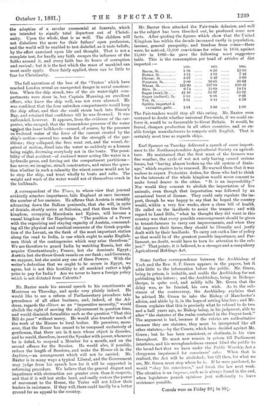 Page 3, 1 October 1881 — Mr. Baxter made his annual speech to his constituents at
Close

Mr. Baxter made his annual speech to his constituents at

Montrose on Thursday, and spoke very plainly indeed. He would like to see a reform of Parliamentary procedure take precedence of all other business, and, indeed, of the Ad- dress, regards the cledure as an "imperative necessity," would abolish the right of moving the adjournment in question time, and would diminish formalities such as the question "That this Bill do pass" without mercy. He would also transfer much of the work of the Houses to local bodies. He perceives, more- over, that the House has ceased to be composed exclusively of gentlemen, that there are in it men whose object is disorder, and he would, therefore, invest the Speaker with power, whenever he is defied, to suspend a Member for a month, and on the second offence for the Session. He would also, if possible, reduce the length of Sessions, and make the House sit in the daytime,—an arrangement which will not be carried. Mr. Baxter is in many ways a typical Liberal, and the Government may judge from his speech how far it will be supported in reforming procedure. We believe that the general disgust and impatience with obstruction are greater even than it suspects, and that if it will but strike hard, and really restore the power of movement to the House, the Tories will not follow their leaders in resistance. If they will, there could hardly be a better ground for an appeal to the country.