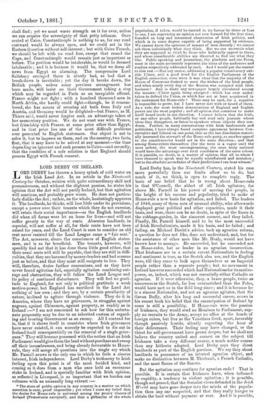 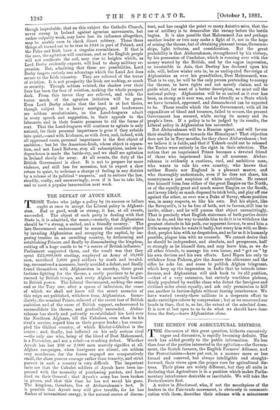 T4ORD DERBY has thrown a heavy splash of cold water on the Irish Land Act. In an article in the Nineteenth Century for October, written with quite extraordinary skill and persuasiveness, and without the slightest passion, he states his opinion that the Act will not pacify Ireland, but that agitation will continue, and probably grow worse. He does not particu- larly dislike the Act ; rather, on the whole, hesitatingly approves it. The landlords, he thinks, will lose little under its provisions, except a power over their tenants which they do not exercise, will retain their social importance—as the English landlords did when all farms were let on lease for lives—and will not suffer greatly in the way of rents. Absentee landlords, in especial, will not suffer at all, for their rents have not been raised for years, and the Land Court is sure to consider an old rent never resisted till the Land League came a "fair rent." The Act, moreover, clears the consciences of English states- men, and is so far beneficial. The tenants, however, will speedily find out that it has done them little good either, that their usual rents will still be payable, that they are still in diffi- culties, that they are harassed by money-lenders and bad seasons just as before, and that they must still emigrate to live. They will, therefore, desire farther concessions, and as they have never found agitation fail, especially agitation combining out- rage and obstruction, they will follow the Land League and its policy of continued disturbance. They will feel no grati- tude to England, for not only is political gratitude a weak motive-power, but England has sacrificed in the Land Act nothing of her own ; and they are, by a certain peculiarity of nature, inclined to agitate through violence. They do it in America, where they have no grievances, in struggles against negroes, against Chinamen, against property, as readily as in Ireland :—" I am not concerned to ask bow far this unfortu- nate propensity may be due to an inherited custom of regard- ing and treating Government as an enemy. All I contend for is, that if it shows itself in countries where Irish grievances have never existed, it can scarcely be expected to die out in Ireland itself consequentially on the removal of a single griev- ance." They will become possessed with the notion that an Irish Parliament would give them the land without purchase and sweep off their incumbrances, and being already favourable to Home- rule, they will merge all questions into the single cry which Mr. Parnell avows is the only one in which he feels a sincere interest, Irish independence. Lord Derby's testimony to Irish feeling upon this point is of the most decided kind, and coming as it does from a man who once held an enormous stake in Ireland, and is specially familiar with Irish opinion, as reflected in Liverpool, is so important that we burden our columns with an unusually long extract :— "The state of public opinion in any country is a matter on which assertion is easy, proof impossible ; yet when I state my belief that the desire for Home-rule is universal among the poorer classes of Ireland (Protestants excepted), and that a plebiscite of the whole population, if taken, would be carried in its favour by three or four to one, I am expressing an opinion not now formed for the first time, founded on long and interested observation of Irish politics, and which is to some degree capable of being supported by evidence. We cannot know the opinions of masses of men directly ; we cannot ask them individually what they think. But we can ascertain what they are supposed to think by those who habitually appeal to them, and whose considerable abilities are directed to find out what they like. Public speaking and journalism, the platform and the Press, must in the main accurately represent the ideas of the audiences and readers respectively addressed by each. And I would put the matter to this test :—Has any orator, addressing a popular constituency out- side Ulster, said a good word for the English Parliament or the English connection, even when it was clear that the majority of the House of Commons desired to meet the wishes of the Irish people, and when nearly every day of the Session was occupied with Irish business ? And is there any newspaper largely circulated among the masses—Ulster again being excepted—which has over under- taken to defend the Union, or which has not at least acquiesced in the movement for Home-rule ? There may be such, for a negative is impossible to prove, but I have never met with or heard of them. As a role, the most violent denunciations of England and English power are the most popular ; and all opinion that contrives to make itself heard tends in one direction. I cannot believe that the Irish, or any other people, habitually buy and read only journals whose ideas they disapprove, or listen to speakers whose objects they con- demn. Further, in many conversations with Irish landowners and politicians, I have always found complete agreement between Con- servative and Liberal on one point, that as the last dissolution materi- ally increased the strength of the Home-rule party, so another appeal to the constituencies would act in the same direction ; and that among Home-rulers themselves (for the term is a vague one) the- most ardent, the most uncompromising, the most truly national would have the advantage over rival candidates of the same colour. It is possible, no doubt, in a matter of opinion, that all to whom I have chanced to speak may be equally misinformed and mistaken ; but to the absolute accordance of their predictions I can bear witness."

Lord Derby has, in the Nineteenth Century, stated his case more powerfully than our limits allow us to do, but much of it, we think, is open to complete reply. The basis of our belief that he is wrong about Home-rule is that O'Connell, the ablest of all Irish agitators, far above Mr. Parnell in his power of moving the people, in the height of his success and popularity, tried to make of Home-rule a new basis for agitation, and failed. The leaders of 1848, many of them men of unusual ability, who afterwards displayed great political and other capacities, made it their basis, and were, there can be no doubt, in spite of the fiasco in the cabbage-garden, in the sincerest earnest, and they failed. Finally, Mr. Parnell himself, said to be the most successful of Irish Revolutionists, made it his basis, and he failed ; and failing, on Michael Davitt's advice, took up agrarian reform, a question he does not like, does not understand, and, but for the assistance of other men like Mr. Healy, would not have known how to manage. He succeeded, but he succeeded not as Home-ruler, but as leader in an agrarian insurrection. That Irishmen are to a certain extent Nationalists in feeling and sentiment is true, as the Scotch also are, and the English were, till they came to look upon themselves as an Imperial people rather than a separate people ; but no movement in Ireland has ever succeeded which had Nationalism for its motive- power, or, indeed, which was not essentially either Catholic or agrarian. If it were otherwise, they, a brave people, twice as numerous as the Scotch, far less overmatched than the Poles, would have met us in the field long since ; and it is because he is a sincere Nationalist, and not an agrarian agitator, that Sir Gavan Duffy, after his long and successful career, avows in his recent book his belief that the emancipation of Ireland by arms is still a possibility. If Home-rule were the passion of Irishmen, they would send no Members to Parliament, sup- ply no recruits to the Army, accept no office at the hands of foreign rulers, but live as the Venetians lived, apart, incurably though passively hostile, silently expecting the hour of their deliverance. Their feeling may have changed, or the thirst for self-government have grown deeper, but we shall not believe the country united and earnest on the subject till Irishmen take a very different course, a much nobler course than any hitherto adopted. Lord Derby says they shoot landlords as part of the English garrison. We say they shoot landlords in pursuance of an internal agrarian object, and make no distinction between M. Thiebault, a French Catholic, and the most Saxon of the Saxons.

But the agitation may continue for agrarian ends ? That is possible. It is certain that Irishmen have, when inflamed by cupidity, a tendency to violent agitation ; it is possible, though not proved, that the Socialist views defended in the !rig World may have gone deeper into the minds of the popula- tion than any one suspected, and that they really hunger to obtain the land without payment or rent. And it is possible,

though improbable, that on this subject the Catholic Church, never strong in Ireland against agrarian movements, but rather culpably weak, may have lost its influence altogether, may be unable even to check direct robbery. Those three things all turned out to be true in 1848 in part of Poland, and the Poles and Irish have a singular resemblance. If that is the case, the agitation will continue, and as the English people will not confiscate the soil, may rise to heights which, as Lord Derby evidently expects, will lead to sharp military re- pression. But, admitting that these are possibilities, Lord Derby forgets entirely one advantage which the Land Act does secure to the Irish tenantry. They are relieved of the terror of eviction. It is not prosperity the Irish are seeking, so much as security. Though seldom evicted, the shadow over their lives has been the fear of eviction, making the whole prospect dark. From this terror they are relieved, and with the terror much of the agrarian irritation will be gone. Even Lord Derby admits that the land is at last theirs, though subject to a heavy mortgage, and landowners are seldom revolutionists, as the Land-leaguers admit in every speech and suggestion, in their appeals to the labourers, and in their frantic promises to rid the farms of rent. That the Land-leaguers will continue to agitate is only natural, for their personal importance is gone if they subside into quiet,—and with Irishmen, as with Jews, and, indeed, with all oppressed races, personal importance is the first object of ambition ; but let the American-Irish, whose object is separa- tion, and not Land Reform, stop all subscriptions, unless in- dependence is made the battle-cry, and we shall see agitation in Ireland slowly die away. At all events, the duty of the British Government is clear. It is not to prepare for more violence, and still less for secession, but to expect a slow return to quiet, to welcome a change of feeling in any district by a release of its political" suspects," and to enforce the law, steadily, coolly, and unswervingly, even if it has to take life, and to meet a popular insurrection next week.