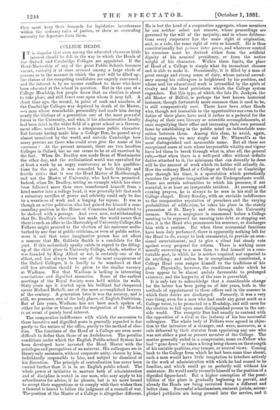 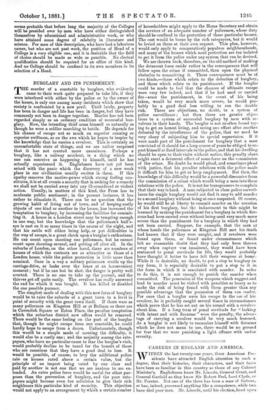 T is singular that even among the educated classes so little

interest should be felt in the way in which the Heads of the Oxford and Cambridge Colleges are appointed. If the Head-Mastership of any of the great Public Schools becomes vacant, curiosity is at once aroused among a large circle of persons as to the manner in which the post will be filled up ; the claims of the competing candidates are eagerly canvassed ; and the interest is by no means confined to those who have been educated at the school in question. But in the case of a -College Headship, few people know that an election is about to take place, and still fewer care upon whom it may fall. A short time ago, the second, in point of rank and numbers, of the Cambridge Colleges was deprived by death of its Master, —a man whose remarkable personality had made him during .nearly the lifetime of a generation one of the most powerful forces in the University, and who, if his administrative faculty had been tried in the wider field of a great school or a Govern- ment office, would have been a conspicuous public character. But fortune having made him a College Don, he passed away almost unnoticed by the world, and outside Cambridge how many persons are there who could even give the name of his successor ? At the present moment, there are two headless 'Colleges in Oxford, but no one seems to be at all exercised by the fact. When Dr. Bradley was made Dean of Westminster the other day, and the ecclesiastical world was convulsed for at least a week by an angry controversy as to his qualifica- tions for the post, it was conceded by both friendly and hostile critics that it was the Head Master of Marlborough, and not the Master of University, who had been promoted. Indeed, when Dr. Bradley, setting an example which has since been followed more than once, transformed himself from a head master into a college head, it was generally felt that such a voluntary sacrifice of power and celebrity could only be due to a weariness of work and a longing for repose. It was as -though an active politician who had gained for himself a com- .manding position in the House of Commons had submitted to be shelved with a peerage. And even now, notwithstanding that Dr. Bradley's elevation has made the world aware that there is such an office as the Mastership of University College, the Fellows might proceed to the election of his successor undis- -turbed by any fear of public criticism, or even of public notice, were it not that some imaginative person has set afloat a rumour that Mr. Goldwin Smith is a candidate for the ,post. If this melancholy apathy exists in regard to the filling up of the chief place in University College, which, whether it was founded by King Alfred or not, is certainly one of the oldest, and has always been one of the most conspicuous of the Oxford Colleges, it is hardly to be wondered at that -still less attention should be given to the similar vacancy at Wadham. Not that Wadham is lacking in interesting visoziations and dignified memories. Some of the earliest meetings of the Royal Society were held within its walls. 'Sixty years ago it started upon his brilliant but chequered career Richard Bethell, one of the most accomplished lawyers di the century. A generation later it was the nursery, and is still, we presume, one of the holy places, of English Positivism. But of late years, Wadham has not been much spoken of, -either for praise or blame, and the resignation of its Warden is an event of purely local interest.

The comparative indifference with which the succession to these lucrative and dignified posts is generally regarded is due partly to the nature of the office, partly to the method of elec- tion. The functions of the Head of a College are even more difficult to define than those of an Archdeacon. The peculiar conditions under which the English Public-school System has been developed have invested the Head Master with the privileges and prerogatives of an autocrat. His colleagues are in theory only assistants, without corporate unity, chosen by him, individually responsible to him, and Subject to dismissal at his discretion. The principle of centralisation has never been canied further than it is in an English public school. The whole power of initiative in matters both of administration and of discipline is vested in one man, who may apply to his subordinates for advice, if he pleases, but is no more bound to accept their suggestions or to comply with their wishes than a General is bound to follow the judgment of a council of war. The position of the Master of a College is altogether different. He is but the head of a corporation aggregate, whose members he can neither select nor remove, whose proceedings are governed by the will of the majority, and in whose delibera- tions every corporator has the same right of origination, and, as a rule, the same right of veto as himself. He is thus constitutionally but prinzus inter pares, and whatever control he exercises must be derived either from the artificial dignity of his nominal presidency, or from the native weight of his character. Within these limits the place of Head of a College is simply what its incumbent chooses and is able to make it. Occasionally, it is filled by a man of great energy and strong sense of duty, whose natural ascend- ancy among his colleagues is heightened by his position, and whose zeal for educational work is intensified by the spirit of rivalry and the local patriotism which the College system engenders. But this type, of which the late Dr. Jenkyns, the old Master of Balliol, is perhaps the best known historical instance, though fortunately more common than it used to be, is still comparatively rare. There have been other Heads who, though not insensible to the opportunities nor even to the duties of their place, have used it rather as a pedestal for the display of their own literary or scientific accomplishments, at once magnifying their office and increasing their own personal fame by establishing in the public mind an indissoluble asso- cation between them. Among this class, to avoid, again, living examples, we may single out Dr. Whewell's as the most distinguished and memorable name. But all these are exceptional cases of men whose irrepressible vitality and vigour have led them to break through what is, after all, the general rule,—that when there is a well-paid office without definite duties attached to it, the minimum that can decently be done will be the amount of work which its holder will actually do. How the ordinary Head of a College at Oxford or Cambridge gets through his time, is a speculation which periodically exercises the profane imagination of the Undergraduate world. There are certain solemnities to which his presence, if not essential, is at least an inseparable accident. At morning and evening prayers, he is always to be seen in his stall in the College chapel. Every Sunday, with an enviable indifference to the comparative reputation of preachers and the varying probabilities of edification, he takes his place in the stately procession at St. Mary's, and sits through the University sermon. When a scapegrace is summoned before a College meeting to be reproved for running into debt or stopping out late, it is the Head who pronounces his sentence, or discharges him with a caution. But when these ceremonial functions have been duly performed, there is apparently nothing left for the Head to do, except to look ornamental, to provide an occa- sional entertainment, and to give a silent but steady vote against every proposal for reform. There is nothing more morally enervating to a man than to find himself in a com- fortable post, in which he is neither required nor expected to do anything ; and unless he is exceptionally constituted, a College Head soon resigns himself to the traditions of his place. Physically, however, the conditions under which he lives appear to be almost unduly favourable to prolonged existence, and the longevity of the race is proverbial.

It is only fair to acknowledge that a considerable change for the better has been going on of late years, both in the methods of appointment to these offices and in the manner in which their duties are discharged. Formerly, it was a very rare thing, even for a man who had made any great mark as a College tutor, to be promoted to a Headship, and still rarer for the election to fall upon some distinguished person in the out- side world. The energetic Don had usually to contend with the opposition of a rival or the jealousy of his less successful colleagues. The whole body of Fellows were agreed in objec- tion to the intrusion of a stranger, and were, moreover, as a rule debarred by their statutes from appointing any one who was not either a past or present member of the College. The matter generally ended in a compromise, some ex-Fellow who had "gone down" or taken a living being chosen on the strength of his amiable qualities, easy temper, or neutral views. Coming back to the College from which he had been some time absent, such a man would have little temptation to interfere actively in the work of administration with which he had ceased to be familiar, and which could go on perfectly well without his assistance. He would easily reconcile himself to the position of a dignified figure-head. But a higher conception of the possi- bilities of the place is gradually beginning to prevail, and already the Heads are beimg recruited from a different and better class. Successful schoolmasters, eminent jurists, accom- plished publicists are being pressed into the service, and it

seems probable that before long the majority of the Colleges will be presided over by men who have either distinguished themselves by educational and administrative work, or who have attained some degree of celebrity in literature and science. For men of this description, who have had a laborious career, but who are not past work, the position of Head of a College is a very eligible one, and it is desirable that the field of choice should be made as wide as possible. No clerical qualification should be required for an office of this kind. And no College should be confined to its own members in its selection of a Head.