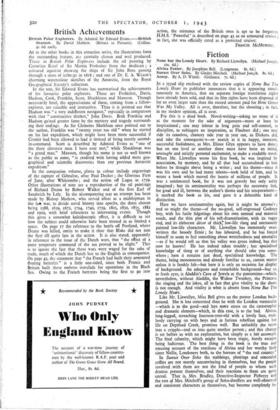 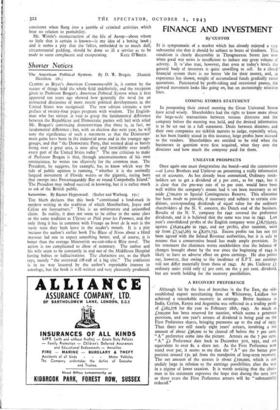 Alvina Foster.. By Josephine Bell. (Longmans. 8s. 6d.) Sunset Over Soho. By Gladys Mitchell. (Michael Joseph. 8s. 6d.) Aesop. By A. D. Wintle. (Gollancz. 7s. 6c1.) IN a typed slip enclosed with the review copies of None But The Lonely Heart its publisher announces that it is appearing simul- taneously in America that six separate foreign translation rights have already been sold, and that its film rights have been disposed of for an even larger sum than the record amount paid for How Green Was My Valley. All is over, therefore, bar the shouting ; in fact, in my modest opinion, all is over.

For this is a dead book. Novel-writing--asking no more of it at the moment for the sake of argument-must at least be inspirational ; one may labour in long pain and self-control, to discipline, to subjugate an inspiration, as Flaubert did;. one may ride its ceaseless, chancey tide year in year out, as Dickens did, and take the consequenc-ts—or snatch at it in happy, innocent, successful foolishness, as Mrs. Elinor Glyn appears to have done ; but on one level or another there must have been an initial, unsought and strictly personal excitement, to make a readable novel. When Mr. Llewellyn wrote his first book, he was inspired by association, by memory, and by all that had accumulated in him before he thought about being a writer ; and his theme—since it was his own and he had many talents—took hold of him, and he wrote a book which moved the hearts of millions of people. It was a sentimental book, for it was not gravely but only softly imagined ; but its sentimentality was perhaps the necessary link, for good and ill, between the author's theme and his temperament— it marked the book as his, and gave it a debatable kind of distinction.

Here we have sentimentality again, but it might be anyone's ; and so might the theme—of the no-good, self-engrossed Cockney boy, with his futile fidgetings about his own sensual and material needs, and the thin plot of his selt-dramatisation, with its vague end, and its elaborate decor of thick': low-life slang and unctuously painted low-life characters. Mr. Llewellyn has immensely over- written the broody Ernie ; he has laboured, and he has forced himself to seem to feel something about wretchedness and amorality —as if he would tell us that his valley was green indeed, but that now he knows! He has indeed taken trouble ; but specialised knowledge of slang or of anything else should take you some- where ; here it remains just dead, specialised knowledge. The theme, being monotonous and already familiar to us, cannot matter unless it is freshly felt—but here it is only an occasion for display of background. An adequate and remarkable background—but so, to fresh eyes, is Aladdin's Cave of Jewels at the pantomime—which, nevertheless' without Aladdin, the Widow Twankey, the Princess, the singing and the jokes, all in fact that give vitality to the show, is not enough. And vitality is what is absent from None But The Lonely Heart. Like Mr. Llewellyn, Miss Bell gives us the poorer London back- ground. She is less concerned than he with the London vernacular —which is to the good—and lays mere stress on the catastrophic and dramatic element—which, in this case, is to the bad. Alvina, long-legged, screeching fourteen-year-old with a lovely face, reck- lessly carrying on with boys and in furious rebellion against her life on Deptford Creek, promises well. But unluckily she turns into a cripple—and so into quite another person ; and this change is set before us with no explanation, but simply as a fait accompli. The final calamity, which might have been tragic, barely escapes being ludicrous. The best ,thing in the book is the true and amusing account of the reactions of Alvina and her worthy little sister Nellie, Londoners both, to the horrors of "the real country." In Sunset Over Soho the stabbings plottings and concealed coffins are not merely unconvincing in themselves, but the people involved ;with them are not the kind of people to whom such dramas present themselves, and their reactions to them are quite unreal. That is Mrs. Bradley, Detective-Inspector Pirberry and the rest of Mrs. Mitchell's group of Soho-dwellers are well-observed and consistent characters in themselves, but become completely in-

consistent when flung into a jumble of criminal activities which bear no relation to probability.

Mr. Wintle's reconstruction of the life of Aesop—about whom so little that is certain is known—is my idea of a boring book ; and it seems a pity that the fables, embedded in so much dull, circumstantial padding, should be done so ill a service as to be -

made to seem complacent and exasperating. KATE O'BRIEN.