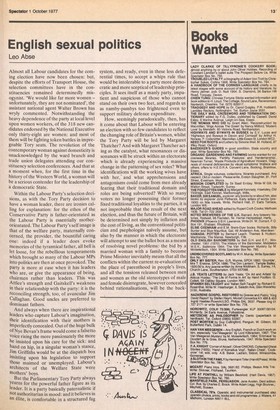 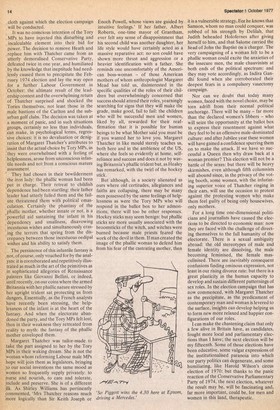 Almost all Labour candidates for the coming election have now been chosen: but, despite the efforts of Transport House, the selection committees have in the constituencies remained determinedly misogynist. 'We would like far more women — unfortunately, they are not nominated', the assistant national agent Walter Brown has wryly commented. Notwithstanding the heavy dependence of the party at local level upon women workers, of the 318 new candidates endorsed by the National Executive only thirty-eight are women: and' most of them will be fighting token battles in impregnable Tory seats. The revolution of the contemporary woman against domesticity is unacknowledged by the ward branch and trade union delegates attending our constituency selection conferences. And that at a moment when, for the first time in the history of the Western World, a woman will be a serious contender for the leadership of a democratic State.

Within the Labour Party's selection decisions, as with the Tory Party decision to have a woman leader, there are ironies calling for explanation: for the ethos of the Conservative Party is father-orientated as the Labour Party is essentially motherorientated. The Labour Party's self image is that of the welfare party, maternally concerned, the provider, the bountiful caring one: indeed if a leader does evoke memories of the tyrannical father, all hell is let loose, for the rebellious temperaments which brought so many of the Labour MPs into politics are then at once provoked. The party is more at ease when it has leaders Who are, or give the appearance of being, chairmen rather than leaders. This was Attlee's strength and Gaitskell's weakness in their relationship with the party: it is the reconciling strength, too, of avuncular Jim Callaghan. Good uncles are preferred to dominant fathers.

And always when there are inspirational leaders who capture Labour's imagination, their identification with their mothers is imperfectly concealed. Out of the huge bulk of Nye Bevan's frame would come a falsetto voice rising the more passionately the more he insisted upon his care for the sick: and hand on hip, in a singular woman's stance, Jim Griffiths would be at the dispatch box insisting upon his legislation to support those maimed or unemployed. Labour's architects of the Welfare State were mothers' boys. But the Parliamentary Tory Party always yearns for the powerful father figure as its leader, It is a party basically paternalistic if not authoritarian in mood: and it believes in an elite, is comfortable in a structured fag system, and ready, even in these less deferential times, to accept a whips rule that would be intolerable to a party more democratic and more sceptical of leadership principles. It sees itself as a manly party, impatient and suspicious of those who cannot stand on their own two feet, and regards us as namby-pambys too frightened even to support military defence expenditure.

How, seemingly paradoxically, then, has it come about that Labour will be entering an election with so few candidates to reflect the changing role of Britain's women, whilst the Tory Party will be led by Margaret Thatcher? And with Margaret Thatcher acting as the catalyst, what resonances or dissonances will be struck within an electorate which is already experiencing a massive change in the patterning of sex roles? What identifications will the working wives have with her, and what apprehensions and antagonisms could come from men already fearing that their traditional domain and roles are being subverted? With so many voters no longer possessing their former fixed traditional loyalties to the parties, it is not improbable that the result of the next election, and thus the future of Britain, will be determined not simply by inflation and the cost of living, as the conventional politician and psephologist naïvely assume, but also by the manner in which the electorate will attempt to use the ballot box as a means of resolving novel problems: the bid by a married woman with a family to become Prime Minister inevitably means that all the conflicts within the current re-evaluation of the place of parenthood in people's lives, and all the tensions released between men and women as the old stereotypes of male and female disintegrate, however concealed behind rationalisations, will be the back , cloth against which the election campaign will be conducted.

, It was no conscious intention of the Tory , MPs to have injected this disturbing and incalculable element into their bid for power. The decision to remove Heath and , replace him with Thatcher came from an utterly demoralised Conservative Party, defeated twice in one year, and humiliated by the knowledge that ineptitude had need, lessly caused them to precipitate the February 1974 election and lay the way open , for a further Labour Government in October: the ultimate result of the leadership contest and the overwhelming return of Thatcher surprised and shocked the Tories themselves, not least those in the male bastions of the Carlton and the suburban golf clubs. The decision was taken at a moment of panic, and in such situations groups, certainly no less than individuals, -can make, in psychological terms, regres-sive choices: it is no devaluation or denigration of Margaret Thatcher's attributes to insist that the actual choice by Tory MPs, as :they were overwhelmed with a feeling of : helplessness, arose from unconscious infantile needs and not from a conscious mature assessment.

They had chosen in their bewilderment the iron lady: the phallic woman had been put in charge. Their retreat to childish 'dependence had been startling: their father leader had utterly failed them and the failure threatened them with political emasculation. Certainly the phantasy of the phallic mother, whether innate or not, is a powerful aid sustaining the infant in his dependency and smallness, disavowing incestuous wishes and simultaneously erasing the terrors that spring from the discrepancy between those incestuous oedipal wishes and his ability to satisfy them.

The persistence of this infantile fantasy is not, of course, only vouched for by the anal ysts: it is corroborated and repetitively illustrated as much itrthe art of the primitives as in sophisticated allegories of Renaissance painters like Giovanni Bellini, or indeed, until recently, on our coins where the armed Britannia with her phallic nature stressed by her upright trident sat protecting us from dangers. Essentially, as the French analysts have recently been stressing, the helplessness of the infant is at the heart of the -fantasy. And when the electorate abandoned the party, and the Tory MPs felt lost, then in their weakness they retreated from reality to myth: the fantasy of the phallic 'mother enveloped them.

Margaret Thatcher was tailor-made to take the part assigned to her by the Tory ,MPs in their waking dream. She is not the woman whom reforming Labour male MPs hope will join them as legislators, bringing to our social inventions the same mood as women so frequently supply privately: to nurse and nourish, to care and tolerate, include and preserve. She is of a different ilk. As Shirley Williams has pertinently commented, 'Mrs Thatcher reasons much more logically than Sir Keith Joseph or Enoch Powell, whose views are guided by intuitive feelings.' If her father, Albert Roberts, one-time mayor of Grantham, ever felt any sense of disappointment that his second child was another daughter, her life style would have certainly acted as a massive reparative act: no son could have shown more thrust and aggression or a heavier identification with a father. She reminds one uncomfortably of the American boss-woman — of those American mothers of whom anthropologist Margaret Mead has told us, disinterested in the specific qualities of the roles of their children but overwhelmingly concerned that success should attend their roles, yearningly searching for signs that they will make the grade, make good, fail to fail: the children who will be successful men and women, liked by all, rewarded for their reaffirmation that it is possible for human beings to be what Mother said you must be if you wanted her to love you. Margaret Thatcher in like mould sternly teaches us, both here and in the ambience of the US, where she feels so evidently at home, selfreliance and success and does it not by waving Britannia's phallic trident but, as Healey has remarked, with the twirl of the hockey stick.

But although, in a society alienated as ours where old certitudes, allegiances and faiths are collapsing, there may be many men possessed by the same feelings of helplessness as were the Tory MPs who will respond in the ballot box to her admonitions, there will too be other responses. Hockey sticks may seem benign: but phallic sticks are more usually associated with the broomsticks of the witch, and witches were burned because male priests feared the work of the devil in them. If man created the image of the phallic woman to defend him from his fear of the castrating mother, then it is a vulnerable strategy. For he knows that Samson, whom no man could conquer, was robbed of his strength by Delilah, that Judith beheaded Holofernes after giving herself to him, and that Salome carried the head of John the Baptist on a charger. The very campaigning of a woman felt to be a phallic woman could excite the anxieties of the insecure men, the male chauvinists at both ends of the political spectrum: and they may vote accordingly, as Indira Gandhi found when she corroborated their deepest fears in a compulsory vasectomy campaign.

Nor can we doubt that today many women, faced with the novel choice, may be torn adrift from their normal political anchorage. There will be many — far more than the declared women's libbers — who will seize the opportunity at the ballot box to express their resentment against what they feel to be an offensive male-dominated culture: and after Jubilee year these women will have gained a confidence spurring them on to make the attack. If we have so successful a Queen then why draw back at a woman premier? This election will not be a battle of the sexes: but there will be heavy skirmishes, even although fifth columnists will abound since, in the privacy of the voting booth, some women, with the infuriating superior voice of Thatcher ringing in their ears, will use the occasion to protest against the protesting women who, make them feel guilty of being only housewives, only mothers.

For a long time one-dimensional politicians and journalists have caused the elections to be directed to economic man: now they are faced with the challenge of directing themselves to the full humanity of the electorate. There is a sexual ambiguity abroad: the old stereotypes of male and female identity are dissolving, the male becoming feminised, the female masculinised. There are inevitably consequent confusions finding ominous expression, not least in our rising divorce rate: but there is a great plasticity in the human capacity to develop and sustain different patternings of sex roles. In the election campaign that has now commenced, with Margaret Thatcher as the precipitate, as the predicament of contemporary man and woman is levered to the surface, insights can develop helping us to form new more relaxed and happier configurations of our roles.

I can make the chastening claim that only a few alive in Britain have, as candidates, fought more local and parliamentary elections than I have; the next election will be my fifteenth. Some of those elections have been educative, some vulgar expressions of the institutionalised paranoia into which our party politics can degenerate, and some humiliating, like Harold Wilson's circus election of 1970: but thanks to the panic reaction of the Conservative Parliamentary Party of 1974, the next election, whatever the result may be, will be fascinating and, far more important, could be, for men and women in this land, therapeutic.