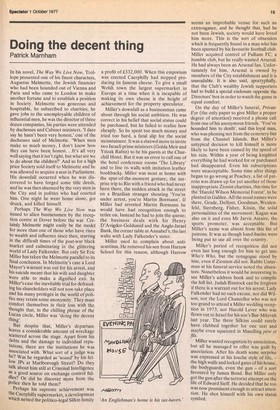 In his novel, The Way We Live Now, Trollope presented one of his finest characters, Augustus Melmotte, the Jewish financier who had been hounded out of Vienna and Paris and who came to London to make another fortune and to establish a position in Society. Melmotte was generous and hospitable, he subscribed to charities, he gave jobs to the unemployable children of influential men, he was the director of three dozen companies, his parties were attended by duchesses and Cabinet ministers. 'I dare say he hasn't been very honest,' one of the duchesses said of Melmotte. 'When men make so much money, I don't know how they can have been, honest. . .It's all very well saying that it isn't right, but what are we to do about the children?' And so for a high price Society sold itself to Melmotte and he was allowed to acquire a seat in Parliament. His downfall occurred when he was discovered to have forged some title deeds, and he was then shunned by the very men in the City and in politics who had courted him. One night he went home alone, got drunk, and killed himself.

Perhaps The Way We Live Now was issued to alien businessmen by the reception centre at Dover before the war. Certainly Melmotte might easily be the model for more than one of those who have risen to wealth and influence since then, starting in the difficult times of the post-war black market and culminating in the glittering world of Lady Falkender. But only Sir Eric Miller has taken the Melmotte parallel to itS final conclusion. In Melmotte's case a Lord Mayor's warrant was out for his arrest, and his suicide meant that his wife and daughter Were able to make a dignified exit. In Miller's case the inevitable trial for defrauding his shareholders will not now take place and his many proteges in the world of politics may retain some anonymity. They must Comfort themselves in their loss with the thought that, in the chilling phrase of the Lucan circle, Miller was 'doing the decent thing'.

But despite that, Miller's departure leaves a considerable amount of wreckage scattered across the stage. Apart from his debts and the damage to individual reputations, there are the institutions he was associated with. What sort of a judge was he? Was he regarded as 'sound' by his fellow JPs at Marlborough Street? Do they talk about him still at Criminal Intelligence as a good source on exchange control fiddles? Or did he discover more from the Police then he told them?

Perhaps his supreme achievement was the Caerphilly supermarket, a development Which netted the politico-legal Silkin family a profit of £332,000. When this emporium was erected Caerphilly had stopped producing its famous cheese. To give a small Welsh town the largest supermarket in Europe at a time when it is incapable of making its own cheese is the height of achievement for the property speculator.

Miller's downfall as a businessman came about through his social ambition. He was correct in his belief that social status could be purchased, but he failed to realise how cheaply. So he spent too much money and tried too hard, a fatal slip for the social mountaineer. It was a shrewd move to invite two Israeli prime ministers (Golda Meir and • Yitzak Rabin) to be his guests at the Churchill Hotel. But it was an error to call one of the hotel conference rooms 'The Library' and to line its walls with imitation leather bookbacks. Miller was most at home with the spur-of-the-moment gesture; the surprise trip to Rio with a friend who had never been there, the sudden attack in the street on a Brazilian stranger shouting 'You're under arrest, you're Martin Bormann'. If Miller had arrested Martin Bormann he would have had recognition enough to retire on. Instead he had to join the queue; the business deals with Sir Henry D'Avigdor-Goldsmid and the Anglo-Israel Bank, the corner table at Annabel's, the last waltz with Lady Falkender's sister.

Miller used to complain about antisemitism. He removed his son from Harrow School for this reason, although Harrow Seems an improbable venue for such an extravagance, and he thought that, had he not been Jewish, society would have loved him more. This is the sort of obsession which is frequently found in a man who has been spurned by his favourite football club. Miller acquired control of Fulham FC, a humble club, but he really wanted Arsenal. He had always been an Arsenal fan. Unfortunately for him, Arsenal is owned by members of the City establishment and it is unavailable. It is also said, apocryphally, that the Club's wealthy Jewish supporters had to build a special enclosure opposite the Directors' box in order to watch the game in equal comfort.

On the day of Miller's funeral, Private Eye (the only paper to give Miller a proper degree of attention) received a phone call from one of his anonymous friends. 'You've hounded him to death', said this loyal man, who was phoning not from the cemetery but from the Channel Islands. But Miller's untypical decision to kill himself is more likely to have been caused by the speed of his ruin. Within a year of being knighted everything he had worked for or purchased had disappeared. Even his subscriptions were unacceptable. Some time after things began to go wrong at Peachey, a list of pat rons was drawn up for yet another of those inappropriate Zionist charities, this time for the 'Harold Wilson Memorial Forest', to be planted in Galilee. All the usual names were there, Grade, Delfont, Goodman, Weiden feld, Sternberg, Fisher, Kissin, the solid personalities of the movement; Kagan was also on it and even Mr Jarvis Astaire, the sports promoter, was acceptable. But Miller's name was absent from this list of patrons. It was as though hand-basins were being put to use all over the country.

Miller's period of recognition did not even last long enough for him to get into Who's Who, but the synagogue stood by him, even if Zionism did not. Rabbi Unterman at his funeral service noted the absentees. Nonetheless it would be interesting to see Miller's address book and to compile the full list. Judah Binstock can be forgiven if there is a warrant out for his arrest; Lady Falkender had no such excuse, nor did Wilson, nor the Lord Chancellor who was not too grand to attend a Miller wedding reception in 1973, nor Harold Lever who was flown out to Israel for his son's Bar-Mitzvah last year. The three Silk ins could surely have clubbed together for one taxi and maybe even squeezed in Maudling pere et fils.

Miller wanted recognition by association, but all he managed to offer was guilt by association. After his death some surprise was expressed at his louche style of life, — the high walls and locked gates of his house, the bodyguards, even the gun — of a sort favoured by James Bond. But Miller only got the gun after the terrorist attempt on the life of Edward Sieff. He decided that he too was now prominent enough to attract attention. He shot himself with his own status symbol.