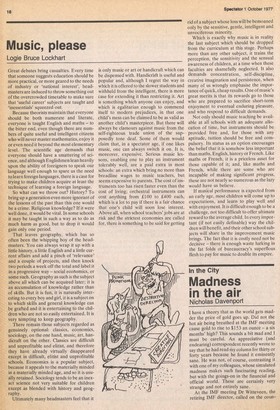 Great debates bring casualties. Every time that someone suggests education should be more practical, or more geared to the needs of industry or 'national interest', headmasters are induced to throw something out of the overcrowded timetable to make sure that 'useful career' subjects are taught and 'inessentials' squeezed out.

Because theorists maintain that everyone should be both numerate and literate, everyone is taught English and maths — to the bitter end, even though there are numbers of quite useful and intelligent citizens who will never master mathematics, enjoy it or even need it beyond the most elementary level. The scientific age demands that everyone should have a smattering of science, and although Englishmen lean heavily upon the ability of foreigners to speak our language well enough to spare us the need to learn foreign languages, there is a case for trying to make children acquire at least the technique of learning a foreign language.

So what can we throw out? History? To bring up a generation even more ignorant of the lessons of the past than this one would be a crime. Religious knowledge? If it were well done, it would be vital. In some schools it may be taught in such a way as to do as much harm as good, but to drop it would gain only one period.

That leaves geography, which has so often been the whipping boy of the headmasters. You can always wrap it up with a little history, a little English and a little current affairs and add a pinch of 'relevance' and a couple of projects, and then knock two periods a week off the total and label it in a progressive way — social economics, or some such. Geography as such is the subject above all which can be acquired later; it is an accumulation of knowledge rather than of skills. But it is fun, it is naturally interesting to every boy and girl, it is a subject on to which skills and general knowledge can be grafted and it is entertaining to the children who are not so easily entertained. It is very tempting to keep geography.

There remain those subjects regarded as genuinely optional: classics, economics, sociology, on the one hand, music, art, handicraft on the other. Classics are difficult and unprofitable and elitist, and therefore they have already virtually disappeared except in difficult, elitist and unprofitable schools. Economics is a popular subject, because it appeals to the materially minded in a materially minded age, and so it is usually retained. Sociology tends to be an inexact science not very suitable for children except as blended with history and geography.

Ultimately many headmasters feel that it is only music or art or handicraft which can be dispensed with. Handicraft is useful and popular and, although I regret the way in which it is offered to the slower students and withheld from the intelligent, there is more case for extending it than restricting it. Art is something which anyone can enjoy, and which is egalitarian enough to commend itself to modern prejudices, in that one child's mess can be claimed to be as valid as another child's masterpiece. But there will always be clamours against music from the self-righteous trade union of the supposedly tone deaf. Some of them would claim that, in a spectator age, if one likes music, one can always switch it on. It is, moreover, expensive. Serious music lessons, enabling one to play an instrument tolerably well, are a paid extra in most schools: an extra which bring no more than breadline wages to music teachers, but seems expensive to parents. The cost of instruments too has risen faster even than the cost of living; orchestral instruments can cost anything from £100 to £400 each, which is a lot to pay if there is a fair chance that one's child will soon lose interest. Above all, when school teachers' jobs are at risk and the strictest economies are called for, there is something to be said for getting rid of a subject whose loss will be bemoaned only by the sensitive, gentle, intelligent and unvociferous minority.

Which is exactly why music is in reality the last subject which should be dropped from the curriculum at this stage. Perhaps more than any other subject, it trains the perception, the sensitivity and the sensual awareness of children, at a time when these faculties are shamefully neglected. It also demands concentration, self-discipline, creative imagination and persistence, when many of us wrongly emphasise the importance of quick, cheap results. One of music's great merits is that its rewards go to those who are prepared to sacrifice short-term enjoyment to eventual enduring pleasure, and who respond to difficult demands.

Not only should music teaching be available at all schools with an adequate allocation of time, but instruments should be provided free and, for those with any aptitude, tuition should be free and compulsory. Its status as an option encourages the belief that it is somehow less important than maths, English, history or French. Like maths or French, it is a priceless asset for those capable of it; and, like maths and French, while there are some who are incapable of making significant progress, these are not nearly so numerous as the lazy would have us believe.

If musical performance is expected from an early age, most children will come up to expectations, and learn to play well and with enjoyment. It is difficult enough to be a challenge, not too difficult to offer,ultimate reward to the average child. In every important (if not easily definable) way the children will benefit, and their other school subjects will share in the improvement music brings, The fact that it is costly need not be decisive — there is enough waste lurking in the fat folds of bureaucracy's superflous flesh to pay for music to double its empire.