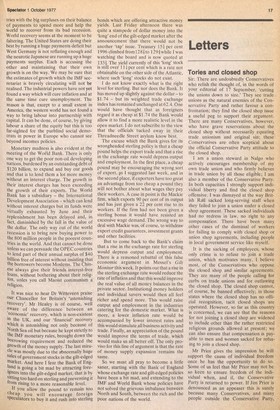 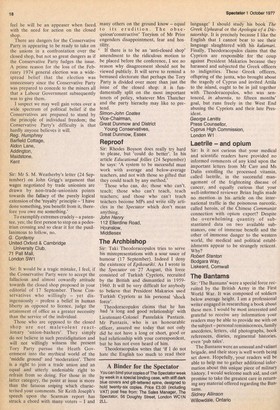 I am a union steward in Nalgo who actively encourages membership of my own trade union and who firmly believes in trade union by all those eligible; I am also a member of the Conservative Party. In both capacities I strongly support individual liberty and find the closed shop offensive. I was dismayed at the way British Rail sacked long-serving staff when they failed to join a union under a closed shop agreement. These sacked individuals had no redress in law, no right to any compensation. There have been many other cases of the dismissal of workers for failing to comply with closed shop or union shop agreements, including people in local government service like myself.

It is the sacking of employees, whose only crime is to refuse to join a trade union, which motivates many, I believe most, of the Conservatives who oppose the closed shop and similar agreements. They are many of the people calling for curbs on trade unions and for outlawing the closed shop. The closed shop cannot, of course, be banned effectively; in those states where the closed shop has no official recognition, tacit closed shops are operated. However, so far as this country is concerned, we can see that the reasons for not joining a closed shop are widened to include other than the rather restricted religious grounds allowed at present; we can also ensure that compensation is payable to men and women sacked for refusing to join a closed shop.

Mr Prior gives the impression he will support the cause of individual freedom once he has the opportunity to do so. Some of us feel that Mr Prior may not be so keen to ensure freedom of the individual when, and if, the Conservative Party is returned to power. If Jim Prior is denounced as an appeaser this is surely because many Conservatives, and many people outside the Conservative Party, feel he will be an appeaser when faced, with the need for action on the closed shop.

I suspect we may well gain votes over a wide spectrum of political belief if the Conservatives are prepared to stand by the principle of individual freedom; the Conservative Party's difficulty is that hardly anyone believes it will.

Reg. Humphrey Barfield Cottage, Aldon Lane, Addington, Maidstone, Kent Sir: Mr S. M. Weatherby's letter (24 September) on John Grigg's argument that wages negotiated by trade unionists are drawn by non-trade-unionists points towards the fallacy of the purely logical extension of the 'royalty' principle —'1 have done something, you benefit from it, therefore you owe me something.'

To exemplify extremes crudely — a patentee, yes; the first person to step on a pedestrian crossing and so clear it for the pusillanimous to follow, no.