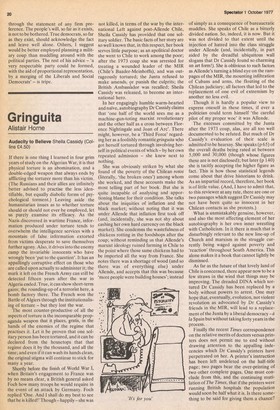 Audacity to Believe Sheila Cassidy (Collins £4.50) If there is one thing I learned in four grim years of study on the Algerian War, it is that physical torture is an abomination, and a double-edged weapon that always ends by afflicting the torturer more than his victim. (The Russians and their allies are infinitely better advised to practise the less identifiable, but equally diabolic forms of psychological torment.) Leaving aside the humanitarian issues as to whether torture should or should not ever be employed, let us purely examine its efficacy. As the Nazis discovered in wartime France, information produced under torture tends to overwhelm the intelligence services with a mountain of false information extorted from victims desperate to save themselves further agony. Also, it drives into the enemy camp the invariable innocents who have wrongly been 'put to the question'. It has an appallingly corruptive effect on those who are called upon actually to administer it; the mark it left on the French Army can still be detected fifteen years after the war in Algeria ended. True, it can show short-term gains; the rounding-up of a terrorist here, a bomb factory there. The French won the Battle of Algiers through the institutionalising of torture — but they lost the war.

The most counter-productive of all the aspects of torture is the incomparable propaganda weapon that it places, gratis, in the hands of the enemies of the regime that practises it. Let it be proven that one solitary person has been tortured, and it can be declared from the housetops that that regime does it by the thousand, and all the time; and even if it can wash its hands clean, the original stigma will continue to stick for many a year.

Shortly before the finish of World War 1, when Britain's engagement to France was by no means clear, a British general asked Foch how many troops he would require in the event of an attack by Germany. Foch replied 'One. And I shall do my best to see that he is killed!' Though — happily — she was not killed, in terms of the war by the international Left against post-Allende Chile, Sheila Cassidy has provided that one solitary soldier. The basic facts of her story are so well known that, in this respect, her book serves little purpose; as an apolitical doctor she went to Chile to work among the poor; after the 1973 coup she was arrested for treating a wounded leader of the MIR (Chile's Baader-Meinhoffs), and was outrageously tortured; the Junta refused to make amends, or punish the culprits; the British AmbasAdor was recalled; Sheila Cassidy was released, to become an international hero.

In her engagingly humble warm-hearted and naïve, autobiography Dr Cassidy claims that 'one half of the world sees me as a machine-gun-toting marxist revolutionary and the other half as a cross between Florence Nightingale and Joan of Arc'. There might, however, be a 'Third Force' regarding her as a foolishly romantic gringuita who got herself tortured through involving herself in political events of which — by her own repeated admission — she knew next to nothing.

She was obviously striken by what she found of the poverty of the Chilean rows (literally, 'the broken ones') among whom she worked, and these accounts make the most telling part of her book. But she is quite incapable of analysing and apportioning blame for their condition. She talks about the iniquities of inflation and the black market; without noting that it was under Allende that inflation first took off (and, incidentally, she was not shy about cashing her own hard currency on the black market). She condemns the wastefulness of chickens rotting in the foodshops after the coup; without reminding us that Allende's marxist ideology ruined farming in Chile to the point where those same chickens had to be imported all the way from France. She notes there was a shortage of wood (and so there was of everything else) under Allende, and accepts that this was because 'more people were building houses'; instead of simply as a consequence of bureaucratic muddles. She speaks of Chile as a bitterly divided nation. So, indeed, it is now. But it was not divided to that extent until the injection of hatred into the class struggle under Allende (and, incidentally, in part aided by the dreadful ubiquitous wall slogans that Dr Cassidy found so charming an art form!). She is oblivious to such factors as Allende's turning a blind eye on the rampages of the MIR, the mounting infiltration of Cubans and arms, the flouting of the Chilean judiciary; all factors that led to the replacement of one evil of extremism by another no less evil.

Though it is hardly a popular view to express oneself in these times, if ever a politician could term himself 'the careful pilot of my proper woe' it was Allende.

The excesses committed by the Junta after the 1973 coup, alas, are all too well documented to be refuted. But much of Dr Cassidy's evaluation of their scale is admitted to be hearsay. She speaks (p 65) of the overall deaths being rated at between 5,000 and 30,000 (though whose figures these are is not disclosed); but later (p 140) she is tacitly accepting the higher figure as fact. This is how those statistical legends come about that drive historians to drink. As an impartial record, therefore, her book is of little value. (And, I have to admit that, to this reviewer at any rate, there are one or two passages which suggest Dr Cassidy may not have been quite so innocent in her Chilean contacts as she protests.) What is unmistakably genuine, however, and also the most affecting element of her autobiography is her own inner wrestling with Catholicism. In it there is much that is disturbingly relevant to the new line-up of Church and marxism in the struggle currently being waged against poverty and 'reaction' throughout South America. This alone makes it a book that cannot lightly be dismissed.

As far as the future of that lovely land of Chile is concerned, there appear now to be a few straws in the wind that things may be improving. The dreaded DINA which tortured Dr Cassidy has been replaced by a body without powers to arrest. One may hope that, eventually, evolution, not violent revolution as advocated by DT Cassidy's friends in the MIR, will lead to a replacement of the Junta by a liberal democracy —à la Spain but without taking forty years in the process.

Finally the recent Times correspondence on the relative merits of doctors versus printers does not permit me to end without drawing attention to the appalling indecencies which Dr Cassidy's printers have perpetrated on her. A printer's instruction has been left undeleted on the half-title page; two pages bear the over-printing of two other complete pages. One must conclude from this, and the continuing mutilation of The Times, that if the printers were running British hospitals the population would soon be half what it is. Is there something to be said for giving them a chance?