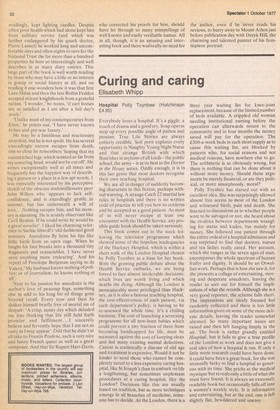 We are all in danger of suddenly becoming characters in this fiction, perhaps without warning. A strange Catch 22 martial law rules in hospitals and there is no written code of practice to tell you how to conform and be accepted as a good patient. As most of us will never escape at least one encounter with the Health Service, any possible guide book should be taken seriously.

This book conies out in the week following the television programme which showed sonic of the hopeless inadequacies of the Hackney Hospital, which is within a short walk of the London Hospital chosen by Polly Toynbee. as a base for her book. With the growing public debate about the Health Service cutbacks, we are being forced to face almost intolerable decisions: which lives are worth living and which deaths the dying. Although the London is immeasurably more privileged than Hackney, as it is also a famous teaching hospital, the cost-effectiveness of each patient., via each department's policy, is having to be re-assessed the whole time. It's a chilling business, The cost of launching a screening programme for all new-born babies which could prevent a oily fraction of them from becoming handicapped for life, must be measured against the cost of keeping clean , and fed many existing mental defectives. Cancer is statistically a disease of old age and treatment is expensive. Would it not be kinder to send those who cannot be corn-, pletely cured to a less expensive caring hospital, like St Joseph's than to embark on life a lengthening, but sometimes unpleasant procedures at a curing hospital, like the London? Decisions like this are usually based on tradition, but as more techniques emerge in all branches of medicine, someone has to decide. At the London, there is a three year waiting list for knee-joint replacement, because of the limited,number of beds available. A crippled old woman needing institutional nursing before the operation can afterwards return to the community and in four months the money saved will pay for the operation. The L300-a-week beds in such short supply as to cause this waiting list, are blocked by patients who, for social reasons and not medical reasons, have nowhere else to go. The arithmetic is so obviously wrong, but there is nothing that can be done about it without more money. Should these arguments be merely financial, or are they political, or more amorphously, moral?

Polly Toynbee has started out with an excellent idea. She was surprisingly allowed almost free access to most of the London and witnessed birth, pain and death. She listened to discussions as to whether people were to be salvaged or not; she heard about the rivalries between departments wrangling for status and kudos, but mainly for money. She followed one patient through the entire ordeal of a hospital admission and was surprised to find that doctors, nurses and tea ladies really cared. Her account, which she ranges as the seven ages of man, encompasses the whole spectrum of human frailty and dignity. It should be an OrwelIlan work. Perhaps that is how,she saw it, for she presents a collage of entertaining, moving and desperate anecdotes, leaving the reader to sort, out for himself the implications of what she records. Although she is a very good reporter, the scheme falls short. The impressions are nicely focused but randomly collected and there is too little information given on some of the more delicate details, leaving the reader somewhat alarmed. So many important issues are raised and then left hanging limply in the air. The book is rather grandly entitled Hospital, but it fails to give a true profile of the London at work and does not give a real idea of how a hospital is run. If only a little more research Could have been done, it could have been a great book, for she was unusually lucky to find a hospital so generous with its time. She pricks at the medical mystique but reveals only a little of what she must have found. It is always an extremely readable book but occasionally falls off into a women's weekly style. It is informative and entertaining, but at the end, one is left slightly flat, bewildered and uneasy.