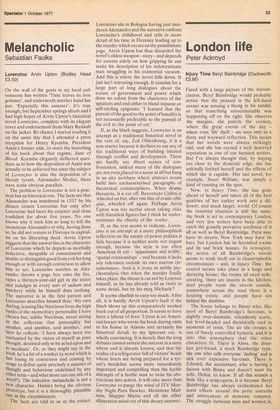 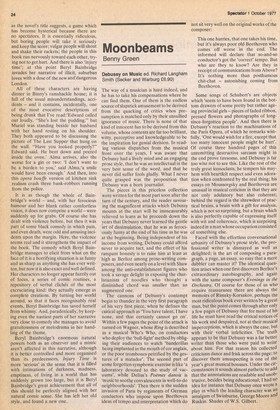 Injury Time Beryl Bainbridge (Duckworth 23.95) Faced with a large picture of the Annunciation, Beryl Bainbridge would probably notice that the peasant in the left-hand corner was missing a thong in his sandal, or that something unmentionable was happening off on the right. She observes the margins, she patrols the corners, where the great events of the day — where even 'life' itself — are seen only as a dusty and wayward reflection. This meant that her novels were always strikingly odd, and she has earned a well deserved reputation as one of our funniest writers. But I've always thought that, by staying too close to the domestic edge, she has unkindly limited herself and the effects of which she is capable. Her last novel, for example, Sweet William, was simply a kind of running on the spot.

Now, in Injury Time, she has gone ahead of herself and taken all of the best qualities of her earlier work into a different, and much larger, world. Of course the essential situation is still the same: the book is set in contemporary London, and very few writers have been able to catch the grandly pervasive seediness of it all as well as Beryl Bainbridge. Paris may have its streets, New York may have its bars, but London has its furnished rooms and its sad brick houses. In retrospect, the action of all Bainbridge's novels seems to work itself out in claustrophobic circumstances — and, in Injury Time, the central scenes take place in a large and decaying house; the rooms all need redecorating, there are insects in the kitchen, mad people roam the streets outside, somewhere across the road there is a housing estate, and people have sex behind the dustbins.

The house belongs to Binny who, like most of Beryl Bainbridge's heroines, is slightly over-dramatic, relentlessly scatty, but level-headed and theatrically coot in moments of crisis. The air she creates is one of barely controlled hysteria, and, it is into this atmosphere that the other characters fit. There is Alma, the drunken girl-friend, a stock Bainbridge type, the one who calls everyone 'darling' and is sick over expensive fur-coats. There is Edward, the accountant, who is having a liaison with Binny and doesn't want his wife, Helen, to know. If all this sounds a little like a soap-opera, it is because Beryl Bainbridge has always orchestrated her main effects around the petty untruths and annoyances of domestic romance. The struggle between men and women is, as the novel's title suggests, a game which has become hysterical because there are no spectators. It is essentially ridiculous, but boring people will take it seriously and keep the score; vulgar people will shout and shake their rackets; the people in this book run nervously toward each other, trying not to get hurt. And there is also 'injury time'; at this point Beryl Bainbridge invades her narrative of illicit, suburban loves with a dose of the new and!dangerous London.

All of these characters are having dinner in Binny's ramshackle house; it is full of the usual misunderstandings, accidents — and it contains, incidentally, one of the most evocative descriptions of being drunk that I've read:'Edward called out loudly, "She's lost the pudding," but Muriel was standing beside her husband with her hand resting on his shoulder. They both appeared to be discussing the picture of The Last Supper that hung on the wall. "Have you looked properly?" Edward said. He bent down and peered inside the oven.' Alma arrives, also the worse for a gin or two: 'I don't want to be a burden to you,' said Alma,`a smile would have been enough.' And then, into this opera bouffe version of kitchen sink realism crash three bank-robbers running from the police.

It is as though the whole of Bainbridge's world — and, with her ferocious humour and her blank rather comfortless vision, it does now comprise a world — were suddenly up for grabs. Of course she has dealt with violence before, but then it was part of some black comedy in which pain, and even death, were odd and amusing incidents upon the margin. Here, the violence seems real and it strengthens the impact of the book. The comedy which Beryl Bainbridge manages to elicit from what on the face of it is a horrifying situation is as funny and as sharp as anything she has ever written, but now it is also exact and well defined. Her characters no longer appear fuzzily out of focus, a series of comic routines, a repository of verbal clichés of the most excruciating kind: they actually emerge as complete creations. By turning her world around, so that it faces recognisably real events, Beryl Bainbridge has saved herself from whimsy. And, paradoxically, by keeping even the nastiest parts of her narrative very close to comedy she manages to avoid gratuitousness or melodrama in her handling of the theme.

Beryl Bainbridge's enormous natural powers both as an observer and a mimic aren't affected in this narrative, although it is better controlled and more organised than its predecessors. Injury Time is more 'serious' in the sense that it is filled with intimations of darkness, madness, emptiness, of living in a world that has suddenly grown too large, but it is Beryl Bainbridge's great achievement that all of this should be perfectly aligned with her natural comic sense. She has left her old style, and found a new one.