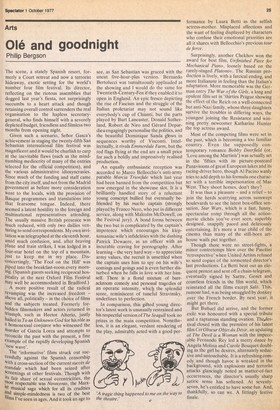 The scene, a stately Spanish resort, formerly a Court retreat and now a terrorist hideaway, exotic setting for the world's number four film festival. Its director, reflecting on the riotous assemblies that dogged last year's fiesta, not surprisingly succumbs to a heart attack and though retaining overall control surrenders the real organisation to the hapless secretarygeneral, who finds himself with a severely depleted budget, friendless and filmless two months from opening night.

Given such a scenario, Senor Gasca's achievement in staging the twenty-fifth San Sebastian international film festival was magnificent and it would be churlish to carp at the inevitable flaws (such as the mindnumbing mediocrity of many of the entries selected for the official competition), and the various administrative idiosyncrasies. Since much of the funding and staff came from the city itself, and not from the Madrid government as before more consideration went to the locals, with the provision of Basque programmes and translations into that fearsome tongue. Indeed, there seemed a latent hostility to the foreign and multinational representatives attending. The usually massive British presence was much reduced, with only two dailies venturing to send correspondents. My own invitation was telegraphed at the eleventh hour, amid much confusion, and, after braving Plane and train strike, I was lodged in a four-star hotel on the top of a mountain, Just to keep me in my place. Disconcertingly, 'The Fool on the Hill' was Piped into the breakfast-room every mornmg. (Spanish guests seeking reciprocal hosPitality at the next Oxford Film Festival May well be accommodated in Bradford.) A more positive result of the radical revamping was the increased freedom — above all, politically — in the choice of films and the subjects treated., Formerly forbidden filmmakers and actors returned in triumph, such as Hector Alterio, justly hailed in To an Unknown God for his role as a homosexual conjuror who witnessed the Murder of Garcia Lorca and attempts to reconcile the past with the present, a fine example of the rapidly developing Spanish new wave'.

The 'informative' films struck out successfully against the Spanish censorship With a cross-section of the current succes de scandale which had been seized after screenings at other festivals. Though with its fair share of sexual eccentricities, the tn. ost respectable was Novecento, the Marx1st musical saga which for all its crudities 4,nd simple-mindedness is two of the best films I've seen in ages. And it took an age to see, as San Sebastian was graced with the uncut five-hour-plus version. Bernardo Bertolucci was tumultuously applauded at the showing and I would do the same for Twentieth-Century-Fox if they enabled it to open in England. An epic fresco depicting the rise of Fascism and the struggle of the Italian proletariat may not sound like everybody's cup of Chianti, but the parts played by Burt Lancaster, Donald Sutherland, Robert de Niro and Gerard Depardieu engagingly personalise the politics, and the beautiful Dominique Sanda glinws in sequences worthy of Visconti. Intellectually, it rivals Emmerdale Farm, but the red flags flying at the end are a small price for such a boldly and impressively realised production.

An equally enthusiastic reception was accorded to Marco Bellocchio's anti-army parable Marcia Trionfale which last year had been banned from the competition but now emerged in the showcase slot. It is a brilliantly handled story of a reluctant young conscript bullied but eventually befriended by his macho captain (strongly played by Franco Nero, who put in different service, along with Malcolm McDowell, on the Festival jury). A bond forms between the two but is complicated by the captain's impotence which encourages his kleptomaniac wife's infidelities with the dashing Patrick Dewaere, as an officer with an incurable craving for pornography. After learning — the very hard way — to appreciate army values, the recruit is unsettled when the captain uses him to spy on his wife's comings and goings and is even further disturbed when he falls in love with her. himself. There is a florid mixture of barrackroom comedy and personal tragedies of an operatic intensity, which the splendid score, reminiscent of tuneful Stravinsky, underlines to perfection.

In comparison, this gifted young director's latest work is unusually restrained and his respectful version of The Seagull took no prizes in the main competition. Nonetheless, it is an elegant, verdant rendering of the play, admirably acted with a good per formance by Laura Betti as the selfish actress-mother. Misplaced affections and the want of feeling displayed by characters who confuse their emotional priorities are all it shares with Bellocchio's previous tour de force .

Surprisingly, another Chekhov won the award for best film, Unfinished Piece for Mechanical Piano, loosely based on the rarely-staged Platonov. The Russian production is lively, with a farcical ending, and more I taliana te in feeling than the Italian's adaptation. More memorable was the German entry The War of the Girls, a long and opulent film set in 'thirties Prague showing the effect of the Reich on a well-connected but anti-Nazi family, whose three daughters survive the troubles in differing ways, the youngest joining the Resistance and winning pretty newcomer Katharine Hunter the top actress award, Most of the competing films were set in the past, which is becoming a too familiar country. Even the supposedly contemporary romance Bobby Deerfield (or, 'Love among the Martinis') was actually set in the 'fifties with its picture-postcard Panavisions of great European lakes and its racing-driver hero, though Al Pacino wanly tries to add depth to his formula one character with a terrible impersonation of Mac West. They shoot horses, don't they?

It was thus a pleasure — and a relief — to join the herds scurrying across sunswept boulevards to see the latest box-office sensation, Star Wars, which is a fast, funny, spectacular romp through all the actionmovie cliches you've ever seen, superbly designed, snappily paced and deliriously entertaining. It's more a true child of the cinema than many of the still-born arthouse waifs put together.

Though there were no street-fights, a minor contretemps blew over the Pasolini 'retrospective' when United Artists refused to send copies of the tormented director's last productions. La Betti beat out an eloquent protest and sent off a chain-telegram, eventually signed by Sartre, Genet and countless friends in the film world, which reinstated all the films except Salo. This, rumour had, was being smuggled by donkey over the French border. By next year, it might get there.

But Buhuel did arrive, and the former exile was honoured with a special tribute and a rapturous standing ovation. The,festival closed with the premiere of his latest film Cet Obscur Objet du Desir, an updating of The Devil is a Woman with the impecc'able Fernando Rey led a merry dance by 'Angela Molina and Carole Bouquet doubling as the girl he desires, alternately seductive and untouchable. It is a refreshing comedy and though havoc is wreaked in the background, with explosions and terrorist attacks glancingly noted as matter-of-fact occurrences, the director's usually sharp satiric sense has softened. At seventyseven, he's entitled to have some fun. And, thankfully, so can we. A fittingly festive finale.