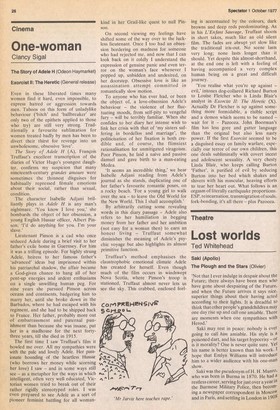 Even in these liberated times many women find it hard, even impossible, to express hatred or aggression towards men. Taboos on this form of unladylike behaviour ('bitch' and `ballbreaker' are only two of the epithets applied to those who try) are still very strong. Traditionally a favourite sublimation for women treated badly by men has been to divert their thirst for revenge into 1111 unwholesome, obsessive 'love'.

The Story of Adele H (A), Francois Truffaut's excellent transcription of the diaries of Victor Hugo's youngest daughter, confirms my suspicion that many nineteenth-century grandes amours were sometimes the thinnest disguises for habitually repressed female emotions about their social, rather than sexual, condition.

The character Isabelle Adjani brilliantly plays in Adele H is any man's nightmare. 'You know I love you,' she bombards the object of her obsession, a young English Hussar officer, Albert Pinson. 'I'd do anything for you. I'm your slave,' Lieutenant Pinson is a cad who once seduced Adele during a brief visit to her father's exile home in Guernsey. For him it was a trifling episode. For highly strung Adele, heiress to her famous father's 'advanced' ideas but imprisoned within his patriarchal shadow, the affair became a God-given chance to hang all of her pent-up energies and ardent enthusiams on a single unwilling human peg. For nine years she pursued Pinson across oceans and continents, badgering him to marry her, until she broke down in the Barbados, where he had escaped with his regiment, and she had to be shipped back to France. Her father, probably more out of embarrassment and paternal punishment than because she was insane, put her in a madhouse for the next fortythree years, till she died in 1915.

The first time I saw Truffaut's film it bowled me over. All my sympathies were with the pale and lovely Adele. Her passionate hounding_ of the heartless Hussar (who borrows her money while scorning her love) I saw — and in some ways still see — as a metaphor for the ways in which intelligent, often very well educated, Victorian women tried to break out of their rather rigidly stereotyped roles. I was even prepared to see Adele as a sort of pioneer feminist battling for all woman kind in her Grail-like quest to nail Pinson.

On second viewing my feelings have shifted some of the way over to the luckless lieutenant. Once I too had an obsession bordering on madness for someone who had rejected me, and now that I can look back on it coldly I understand the expression of genuine panic and even terror on the woman's face whenever I popped up, unbidden and undesired, on her doorstep. Obsessive love is like an assassination attempt committed in romantically slow motion.

To anyone who has ever had, or been the object of, a love-obsession Adele's behaviour — the violence of her fluctuating moods, from self-pity to vengeful fury — will be terribly familiar. When she confides to her diary her intense wish to link her crisis with that of 'my sisters suffering in bordellos and marriage', the politicisation of her fixation is both credible and, of course, the flimsiest rationalisation for unmitigated viragoism. Poor Pinson, he laid a naïve and passive damsel and gave birth to a man-eating Medea.

'It seems an incredible thing,' we hear Isabelle Adjani reading from Adele's journal as she stands, duplicating one of her father's favourite romantic poses, on a rocky beach. 'For a young girl to walk over the sea — to leave the Old World for the New World. This I shall accomplish.'

By arbitrarily cutting some revealing words in this diary passage — Adele also refers to her humiliation in begging money from her father and her ambition (not easy for a woman then) to earn an honest living — Truffaut somewhat diminishes the meaning of Adele's psychic voyage but also highlights its almost primitive function.

Truffaut's method emphasises the claustrophobic emotional climate Adele has created for herself. Even though much of the film occurs in windswept Nova Scotia, where Pinson's troop is stationed, Truffaut almost never lets us see the sky. This crabbed, enclosed feel ing is accentuated by the colours, dark browns and deep reds predominating. As in his L'Enfant Sauvage, Truffaut shoots in short takes, much like an old silent film. The fades are abrupt yet slow like the traditional iris-out. No scene lasts very long; none lasts longer than it should. Yet despite this almost-shorthand, at the end one is left with a feeling of having accompanied a very complex human being on a great and difficult journey.

'You realise what you're up against — evil,' intones dog-collared Richard Burton to Louise Fletcher who is Linda Blair's analyst in Exorcist II: The Heretic (X). Actually Dr Fletcher is up against something more formidable, a risible script and a demon which seems to be named — wait for it — Pazooza. John Boorman's film has less gore and gutter language than the original but also less nasty power. If the first Exorcist seemed to be a disguised essay on family warfare, especially our terror of our own children, this one deals subliminally with covert incest and adolescent sexuality. A very chesty Linda Blair, who keeps calling Burton 'Father', is purified of evil by seducing Burton into her bed which shakes and shivers with his muscular, heaving efforts to tear her heart out. What follows is an orgasm of literally earthquake proportions. ESP, reincarnation, transmigration of souls, fork-bending, it's all there — plus Pazooza.