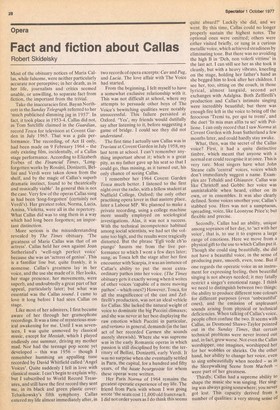 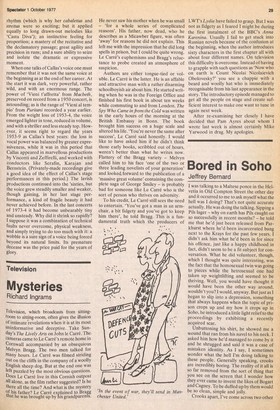 Fact and fiction about Callas

Most of the obituary notices of Maria Callas, while fulsome, were neither particularly accurate nor perceptive; in her death, as in her life, journalists and critics seemed unable, or unwilling, to separate fact from fiction, the important from the triVial.

Take the inaccuracies first. Bayan Northcott in the Sunday Telegraph referred to her 'much publicised slimming jag in 1957'. In fact, it took place in 1953-4. Callas did not, as Tom Sutcliffe claimed in the Guardian, record Tosca for television at Covent Garden in July 1965. That was a gala performance. The recording, of Act II only, had been made on 9 February 1964 — the only existing film, incidentally, of a Callas stage performance. According to Elizabeth Forbes of the Financial Times, 'Longforgotten works by Rossini, Donizetti, Bellini and Verdi were taken down from the shelf, and by the magic of Callas's superb dramatic instinct, found to be theatrically and musically viable'. In general this is not the case. Very few of the operas Callas sung in had been long-forgotten' (certainly not Verdi's), Her greatest roles, Norma, Lucia, Amina, Violetta, were all in the repertory. What Callas did was.to sing them in a way which had long been forgotten; an important distinction.

More serious is the misunderstanding revealed by The Times obituary. 'The greatness of Maria Callas was that of an actress'. Callas held her own against Joan Sutherland's 'well-nigh perfect voice' because she was an 'actress of genius'. This is a familiar line but, quite frankly, it is nonsense. Callas's greatness lay in her voice, and the use she made of it. Her looks, her stage presence, her movements, were superb, and undoubtedly a great part of her appeal, particularly later; but what was essential was the Callas sound. I came to love it long before I had seen Callas on stage.

Like most of her admirers, I first became aware of her through her gramophone recordings. It was a time of mysterious musical awakening for me. Until I was seventeen, I was quite unmoved by classical music, except for Messiah, which I played endlessly one summer, driving my mother mad. Nor had the teenage pop scene yet developed — this was 1956 — though I remember humming an appalling tune recorded by David Whitfield called 'Angel Voices'. Quite suddenly I fell in love with classical music. I can't begin to explain why, but I subscribed to World Record Treasures, and still have the first record they sent me, in its black and green plastic cover: Tchaikowsky's fifth symphony. Callas entered my life almost immediately after, in two records of opera excerpts: Cav and Pag, and Lucia. The love affair with The Voice had started.

From the beginning, I felt myself to have a somewhat exclusive relationship with it. This was not difficult at school, where my attempts to persuade other boys of The Voice's bewitching qualities were notably unsuccessful. This failure persisted at Oxford. 'Yes', my friends 'would dutifully say after listening to it, before suggesting a game of bridge. I could see they did not understand.

The first time I actually saw Callas was in Traviata at Covent Garden in July 1958, my last term at school. I can't remember anything important about it; which is a great pity, as my father gave up his seat so that I could go, thus missing, as it turned out, his only chance of seeing Callas.

I remember her 1964 Covent Garden Tosca much better. I listened to the first night over the radio, with a fellow student at Nuffield College, Oxford; the only other practising opera lover in that austere place, later a Labour MP. We planned to make a private recording, using a college machine more usually employed on sociological investigations. Alas, it was not a success. With the technical incompetence habitual among social scientists, we had set the volume too high, and the results were tragically distorted. But the phrase 'Egli vede ch'io piango' haunts me from the live performance to which I went a few days later; sung, as Tosca left the stage after her first encounter with Scarpia, it was an instance of Callas's ability to put the most extraordinary pathos into her voice. (The Times obituary gets it exactly wrong when it writes of other voices 'capable of a more moving pathos' — which ones?) However, Tosca, for all the magnificence of the cast and Zeffirelli's production, was not an ideal vehicle for Callas. She lacked the natural weight of voice to dominate the big Puccini climaxes; and she was never at her best displaying the raw emotion which Puccini in particular, and verismo in general, demands (in the last act of her recorded Carmen she sounds merely shrewish). Where she was supreme was in the early Romantic operas in which passion is still disciplined by form: the territory of Bellini, Donizetti, early Verdi. It was no surprise when she eventually settled in Paris, the capital, for a hundred and fifty years, of the haute bourgeoisie for whom these operas were written, Her Paris Norma of 1.964 remains the greatest operatic experience of my life. The friend from Paris with whom I was going wrote 'the seats cost 11,000 old francs each. I did not order yours as I do think this seems quite absurd?' Luckily she did, and we went. By this time, Callas could no longer properly sustain the highest notes. The optional ones were omitted; others were either visited briefly, or sung in a curious metallic voice, which achieved steadiness by eliminating tone. But there was no avoiding the high B in `Deh, non volerli vittime' in the last act. I can still see her as she took it cleanly, but with a heavy vibrato, kneeling on the stage, holding her father's hand as she begged him to look after her children. I see her, too, sitting on the couch, in those lyrical, almost languid, second act exchanges with Adalgisa. Both Zeffirelli's production and Callas's intimate singing were incredibly beautiful; but there was enough fire left in the voice to bring off the ferocious `Tremi tu, per qui tu tremi', and the duet 'In mia man alfin tu sei' with Pollione. I can only record that I saw Norma at Covent Garden with Joan Sutherland a few months later, and could hardly stay awake.

What, then, was the secret of the Callas voice? First, it had a quite distinctive timbre, which meant that anyone with a normal ear could recognise it at once. This is very rare. Most singers have what John Steane calls 'central' voices, voices which don't immediately suggest a name. Examples are Tebaldi and Ghiaurov. Callas was like Christoff and Gobbi: her voice was unmistakable when heard, either on its own, or in ensembles. It was also clearly defined. Some voices smother you; Callas's stabbed you. Hers was not a sumptuous, spreading, voice, like Leontyne Price's; but flexible and precise.

Secondly, Callas had an ability, unique among sopranos of her day, to 'act with her voice', that is, to use it to express a large range of emotions. Here we move from a physical gift to the use to which Callas put it. Though she could sing beautifully, she did not have a beautiful voice, in the sense of producing pure, smooth, even, tone. But if one regards the operatic voice as an instrument for expressing feeling, then beautiful singing is not always needed; it may fatally restrict a singer's emotional range. I think we need to distinguish between two things: the ability to produce different tone colours for different purposes (even 'unbeautiful' ones), and the emission of unpleasant sounds arising from physical or technical deficiencies. When talking of Callas's voice, people often confuse the two. It seems with Callas, as Desmond Shawe-Taylor pointed out in the Sunday Times, that certain technical problems were never ironed out and, in fact, grew worse. Not even the Callas worshipper, one imagines, worshipped her for her wobbles or shrieks. On the other hand, her ability to change her voice, even to sing unbeautifully when needed — as in the Sleepwalking Scene from Macbeth — were part of her greatness.

Thirdly, Callas had a supreme ability to shape the music she was singing. Her singing was always going somewhere; you never got lost. This capacity derived from a number of qualities: a very strong sense Of rhythm (which is why her cabalettas and strettas were so exciting; but it applied equally to long drawn-out melodies like 'Caste Diva'); an instinctive feeling for proportion; a mastery of the recitative and the declamatory passage; great agility and precision in runs; and a sure ability to seize and isolate the dramatic or expressive moment.

When one talks of Callas's voice one must remember that it was not the same voice at the beginning as at the end of her career. At the start it was dark, very powerful, rather wild, and with an enormous range. The power of Wieni t'affretta' from Macbeth, preserved on record from a 1950 concert, is astounding; as is the range of `Vieni al ternpio' from Puritani recorded a year earlier. From the weight loss of 1953-4, the voice emerged lighter in tone, reduced in volume, and with a shriller and less steady top. However, it seems right to regard the years 1953-9 as Callas's best years: the loss in vocal power was balanced by greater expressiveness, while it was in this period that Callas appeared in marvellous productions by Visconti and Zeffirelli, and worked with conductors like Serafin, Karajan and Bernstein. (Privately-made recordings give a good idea of the effect of Callas's stage performances in this period.) The lavish productions continued into the 'sixties, but the voice grew steadily smaller and weaker, though gaining, in her last stage performance, a kind of fragile beauty it had never achieved before. In the last concerts of 1973-4 it had become unbearably tiny and unsteady. Why did it shrink so rapidly? I suppose it was a combination of technical faults never overcome, physical weakness, and simply trying to do too much with it: a wobble is a sure sign of a voice being forced beyond its natural limits. Its premature decease was the price paid for the years of glory.